A couple of years after the world got to know that McLaren was making a new hypercar that would be their fastest one ever and would bring back the three-seat layout, petrol heads have been waiting patiently for this day. Initially known as BP23 (Bespoke Project 2 – 3 Seater), McLaren announced its official name a couple of months ago and this is it – the McLaren Speedtail.

Taking inspiration from the iconic McLaren F1 and responding to high customer demand, the Woking automaker finally decided to return to the three-seat layout with the driver in the centre. However, this is not a racecar. It is not a car built to chase speed records. It is a Hyper-GT. McLaren’s first of this sort, it is the ultimate McLaren road car that harmonises smooth aerodynamics, gorgeous looks and ridiculous performance. That is the new McLaren Speedtail.

Details of the powertrain are yet to be shared with the public but it is a petrol-hybrid that delivers a combined output of 1036bhp for a top speed of 403kph, which makes it the fastest McLaren road car ever. The Speedtail is built around a carbon fibre monocoque structure, all carbon-fibre body with aluminium active suspension to keep it lightweight with a dry weight of just 1430kg. With the lightweight body construction and clever hybrid power delivery, McLaren says the Speedtail can accelerate from 0 to 300kph in just 12.8 seconds. That’s almost 4 seconds faster than the McLaren P1 for the same acceleration test.

Aerodynamics are key to the Speedtail’s performance with a focus on reducing drag as much as possible. From the teardrop-shaped cockpit to the carbon fibre front-wheel static aero covers that reduce air turbulence around the wheelarches, it is streamlined for speed. It measures 5,137mm from nose to tail and is narrower than the P1, the elongated tail bleeds off the airflow to reduce turbulence.

The intakes are hidden in the flows of the smooth design. The vertical ducts beneath the LED headlights minimise drag and feed air into the LTRs, the two discreet clam intakes on the hood duct air through the body and around the wheelarch before exiting out of the lower door vents and the residual airflow is directed onto and over the windscreen by a cowling at the trailing edge of the hood. The air then flows over the roof and into powertrain’s snorkel intake to feed air to the petrol-powered element of the hybrid setup. The airflow is maintained with two intakes that slope downwards just behind the glass canopy, split by the central high-mounted brake light and curve down into the engine cover.

There are no door mirrors and are replaced by HD cameras on either side that can retract flush into the bodywork when required. The trailing edge of the McLaren Speedtail showcases a cool bit of tech better referred to as a pair of active rear ailerons. These are flexible carbon-fibre aero elements that are hydraulically actuated and built into the massive single-piece rear clamshell which can literally bend. It allowed McLaren to remove any gaps or shutlines between the vehicle and the leading edge of a spoiler, for less drag and no loss of speed. For optimal aerodynamic performance, the ailerons adjust to move the centre of pressure to provide the necessary downforce. The rear diffuser works in conjunction with the rear blades to reduce drag by the fluent merger of the airflow from the top and and the underside of the hyper-GT. The McLaren Speedtail also has the Velocity Active Chassis Control which can lower the car by 35mm which leaves the highest point of the vehicle just 1,120mm from the tarmac.

The front splitter, diffuser and side skirts are all finished in 1K Titanium Deposition Carbon Fibre. This material has just 1000 fibres per thread, making it lighter than the 3K alternative and allowing the adoption of a Jacquard weaving process to create an intricate, bespoke pattern in the Visual Carbon Fibre elements.

The carbon fibre static aero covers are incorporated into the 20-inch forged alloy front wheels to minimise aerodynamic drag and keeping the air ‘attached’ to the car instead of dispelling it away. The trailing edge of the rear fenders draws turbulent air out of the rear wheelarches, away from the 21-inch forged alloy rear wheels. It gets carbon ceramic brakes and the rubber is bespoke P-ZERO, developed with Pirelli.

The smoothness and elegance of the Speedtail continue inside the cabin when you open the dihedral doors. In here, you will find many exciting highlights other than just the central driving position which creates an incredible sense of space and offers a balanced view of the road ahead. The custom-made carbon-fibre seat is meant for support as well as comfort aided by the ‘directional leather finish’. On either side are two passenger seats that are integral to the carbon fibre monocoque and are also finished in luxurious, lightweight and comfortable materials. In front of the driver is a fighter-jet-like state of the art control system with a lot of screens that sweep across the dashboard and seem to eliminate the need for any buttons at all. And then you look up. Above the driver are the controls to start the engine, turn on McLaren’s Active Dynamics Panel and engage Velocity mode. The overhead panel also has controls to open the windows and doors. This and the seating position make the Speedtail the coolest hypercar in existence. It is also fitted with electrochromic glass that darkens the top of the windscreen and the windows at the touch of a button, removing the need for sunvisors and keeping the openness of the large, enveloping windscreen design.

Only 106 units will be made for customers and all of them are accounted for with a starting price of £2.1 million and a vast range of personalisation possibilities. The first deliveries of the Speedtail are expected to begin in early 2020 and the final production spec may differ slightly from the model unveiled, depending on various legal requirements at the time.

Yes, the Speedtail is slower than current hyper-GT cars like the Bugatti Chiron and Koenigsegg Regera, and the upcoming Rimac C_Two and the Tesla Roadster as well. But the Speedtail has a pedigree, a lineage connection to one of the greatest supercars ever – the McLaren F1, and it is exquisite in its own right. You can’t really compare it to anything else.

What do you think of the McLaren Speedtail? Did it meet your expectations of the BP23? Would you keep those aero-covers on the front wheels to go faster or sacrifice speed and have the rims visible? Share your thoughts in the comments below the gallery. Leave a like if you enjoyed this post and don’t forget to subscribe to The Auto Loons for the all the updates on our latest content. 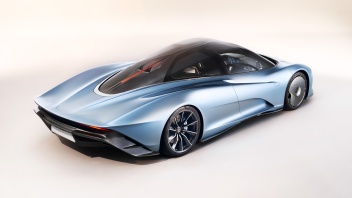 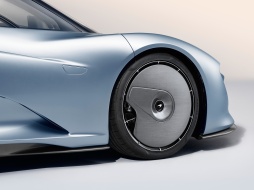 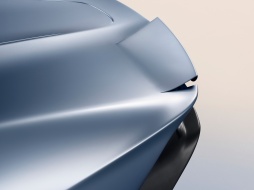 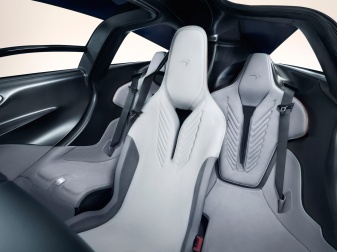 3 thoughts on “McLaren Speedtail unveiled: Elegant, even at 403kph”