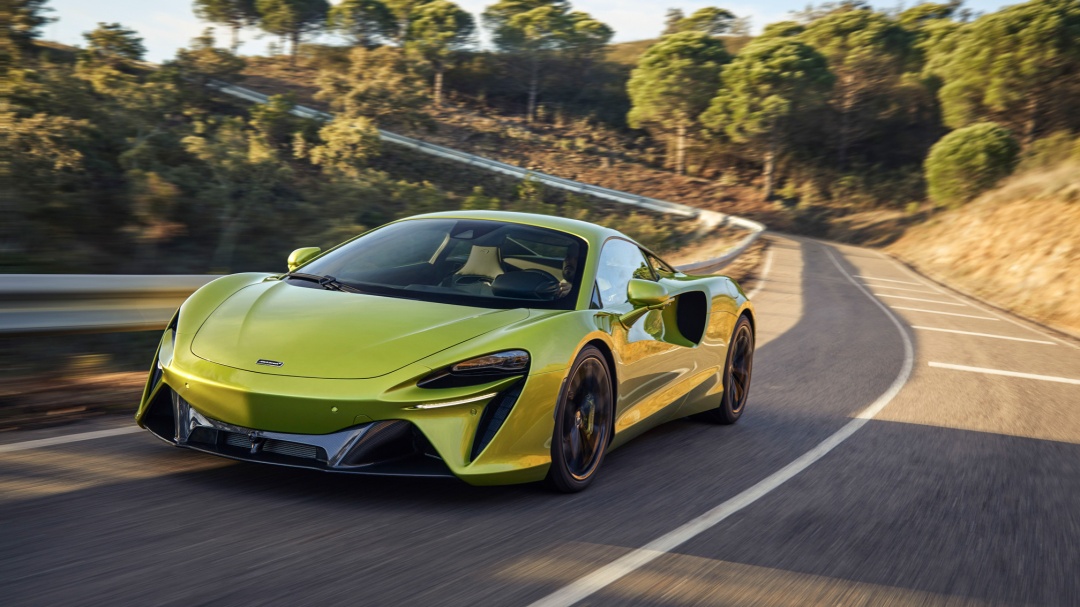 When McLaren returned to the automotive scene as a full-time car brand, it took the world by storm with the P1, a hybrid hypercar. The British moniker has launched a slew of cars since but none that featured a similar kind of electrification as the limited-production P1. Until now.

The McLaren Artura is the first series-production car from Woking to offer plug-in hybrid technology. To accommodate the new 3.0-litre twin-turbo V6 powertrain setup, McLaren has developed the Artura from the ground up. It has a new carbon tub called the McLaren Carbon Lightweight Architecture which will likely underpin the future McLaren hybrids as well. This carbon tub includes a bespoke battery compartment and a domain-based ethernet electrical architecture that allows for more driver assistance systems while reducing the length of cabling required. Not only is the new structure more rigid and safer than before, but it also helps improve the driving dynamics of the car.

Artura’s engine is McLaren Automotive’s second all-new engine with all previous models being powered by different forms and revisions of the 3.8-litre twin-turbo V8 that debuted on the MP4-12C. As is typical of McLaren, the 3.0-litre twin-turbo V6 is designed to be light and compact while still putting out 577bhp and 585Nm of torque. Its 120-degree v-angle allowed for a short and stiff crankshaft that enables this twin-turbo engine to rev at 8200rpm. The turbos are housed in a ‘hot vee’ (between the two cylinder banks) for a sharper response, improved performance and tighter packaging.

McLaren’s V6 is mated to an 8-speed, twin-clutch gearbox with the electric motor integrated within the clutch bell housing. The ratios are closely stacked for fast gearshifts and a more lively experience while accelerating. It also allows the powertrain to utilise the e-motor’s torque during gearshifts, especially at low-revs. The electric motor of the Artura offers 94bhp and 225Nm for a total combined output of 671bhp and 720Nm from the twin-turbo V6 hybrid setup. In terms of performance times, McLaren estimates that the Artura can do 0-100kph in 3.0 seconds, 0-200kph in 8.3 seconds and hit an electronically-limited top speed of 330kph.

The Artura’s 7.4kWh battery pack is made of five lithium-ion modules which sit on a cooling manifold. With the aforementioned e-motor, McLaren claims 30km of pure-EV range and a top speed of 131kph. The battery management unit sits alongside the modules and the power distribution unit is integrated into the battery pack itself. It can be charged via the engine or also using a plug-in charger with a standard EVSE cable which takes 2 and a half hours to fill from 0 to 80 percent battery. The e-motor also acts as the Artura’s reverse gear and also powers the electric climate control system.

In terms of driving dynamics, McLaren has stuck with electro-hydraulic steering for an engaging experience. The Artura is also the first McLaren to feature an electronic differential for a sharp and exciting drive, especially around corners. Its chassis settings could be electronically adjusted in different handling modes that would also alter the settings for the e-diff. There are three settings to choose from: Comfort, Sport and Track. McLarens have a separate setting for the stability control and variable drift control to select how eager they are to slide (depending on how confident you feel about your driving skills).

The braking components for the Artura are based on those used in the 600LT and 720S. It also uses integrated caliper cooling ducts as seen on the 765LT for cooling the brakes quicker, especially during track driving. It may be a hybrid, but there is no brake regen system to ensure that the brake pedal feels consistent throughout. The Artura has 19s at the front and 20s at the rear, wrapped in Pirelli tyres tailor-made for McLaren.

McLaren has also made the Artura a bit more user friendly by fitting it with driver assistance systems such as stop-go adaptive cruise control, lane-departure warning and road-sign recognition. One of the reasons that the Artura is the first to offer these systems is because of the new electrical architecture.

In terms of design, the Artura is easily identifiable as a McLaren. It has the same overall styling for headlamps, the nose and the tail end with central exit exhausts just below the taillamps. The Artura is meant to appear smooth with minimal shut lines but it also has plenty of air vents for cooling and better aerodynamics. Most prominently, it has louvres just over the front wheels and massive intakes leading into the rear arches right behind the doors. The flying buttresses flow smoothly from the roof to the rear section, flanking the engine bay. It looks quite good in the launch spec Flux Green but there are plenty of MSO options to choose from as well.

The cabin of the McLaren Artura looks a lot like other daily-driveable models from the lineup. It has the usual, minimalistic steering wheel with the digital gauge cluster, the vertically-oriented 8-inch central touchscreen infotainment display and the drive selector buttons on the slim central console. According to the official release, the Clubsport seats are new which are 9.5kg lighter than the standard Comfort seats. Compared to other recent new cars from McLaren, like the GT and Speedtail, the Artura is not meant to be as plush. But there were lessons learned from the more expensive cruisers to offer a refined cabin experience in terms of NVH levels and comfort.

The final question then: how much for a hybrid McLaren supercar with over 670bhp? The standard specification would set you back £185,000 but a nice spec with some MSO bits could reach close to £300,000. That’s a lot of cash for a twin-turbo V6 that’s not even a limited production model. There are quicker, cooler and better-looking performance cars available for similar prices like the latest Porsche 911 Turbo S and Lamborghini Huracan Evo RWD. But if videos from Shmee150 and Robert Mitchell have taught me correctly, then a McLaren is the middle ground in terms of performance and excitement in a combo unlike any other.

I saw some outfits calling the Artura the less-rich man’s P1 but I’d like to disagree. There is a similarity in the underlying principle of hybrid performance but when it comes to being special…the Artura just ain’t it. If you really want to be more eco, you might as well consider the entry-level Porsche Taycan (it’s RWD) or a Tesla Model S or even the Audi RS e-tron GT.

What do you make of the McLaren Artura? Do you agree with what I have to say about it? Share your thoughts in the comments below and don’t forget to subscribe to the Auto Loons for more cool updates from the car world.