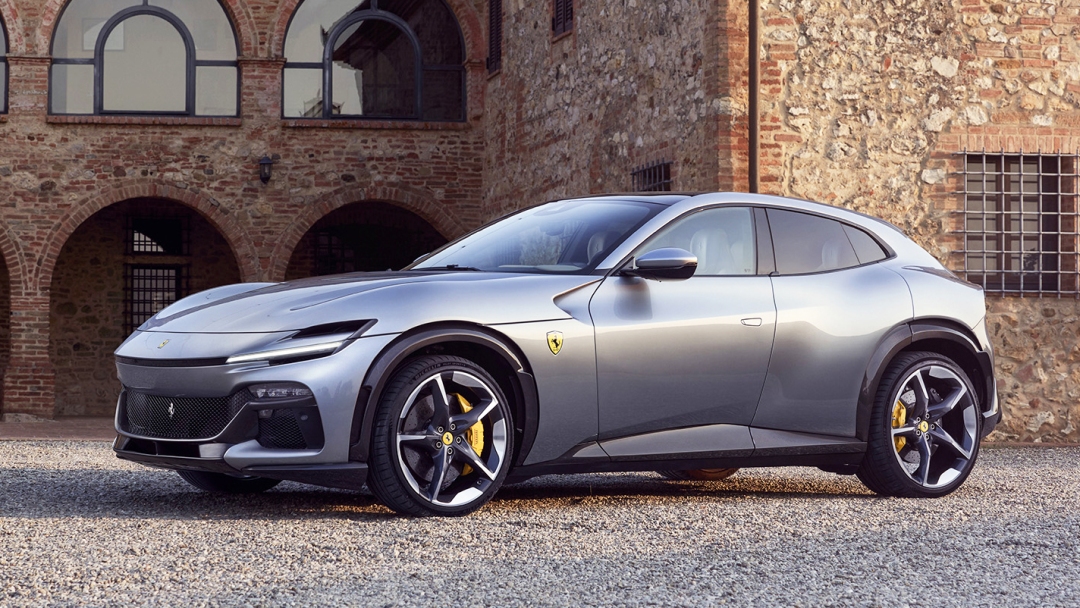 After years of speculation and anticipation, the final bastion has fallen to the epidemic of SUVs. Ferrari has taken the covers off of its first tall-riding performance car — the Purosangue.

Of course, Ferrari refuses to call the Purosangue an SUV, but it certainly looks the part. The cladding around the wheel arches is a dead giveaway, as is the uncharacteristic ride height. The Maranello folks describe it as a luxurious, dynamically capable, tall and high-riding grand tourer.

In terms of design, the Purosangue is quite distinctive with its long bonnet. There are many creases, cuts and curves that are both aesthetic and purposeful in terms of aerodynamics. These lines also help channel air through to the relevant cooling intakes. Speaking of intakes, there are a few around the DRLs with the main headlamps housed in the tall bumper. The overall design is aggressive and muscular with the flared arches, the angular shapes in the front and the rear, and the wide stance. It doesn’t look like the fastest horse in the stable, but perhaps the most buff.

The rear packs a host of neat design details such as the roof-mounted spoiler, the rear windscreen with rakes instead of a wiper, and the quad-exit exhaust. That contrast-coloured skid plate with the integrated diffuser is almost rally-like for its combination of rugged and sporty looks. The metal folds behind the rear haunches and under the taillamps for the air vents are part of Purosangue’s overall sculpted appearance. It gets a carbon fibre roof as standard but can be fitted with an electrochromic glass roof for a nicer cabin experience.

While it does seem to borrow styling cues from Ferrari’s newest models such as the Portofino and the SF90 Stradale, it does not look like a GTC4 Lusso with a lift kit. The Purosangue is its own thing. While I can’t say that I’m a fan, I feel that it will grow on me. I suspect it looks a lot better in person and on the move.

Let’s move on to the first party trick in Ferrari’s “elevated GT” — the rear doors. They are hinged at the rear and open up electronically, just like a Rolls-Royce. While atypical of a Maranello-made offering, it certainly ups the wow factor. It’s also unique in an otherwise well-populated niche of performance SUVs.

Upon accessing the rear half of the cabin, you’ll notice there’s a fixed centre console in the middle and no bench seat. That’s because the Purosangue is strictly a four-seater and aims to offer each seat near equal amounts of comfort and support. No seat should feel like a compromise inside the Ferrari four-door, is what we think they’re going for. These seats are shaped like performance seats too with a very notable curve for the under-thigh support which rises well above the base of the seat. There are mounting points behind the front seats for rear entertainment screens but they were not part of the unveil specification. In the centre console between the rear seats is another very new, very cool piece of kit from Ferrari. The climate controls are located on a pop-up rotary dial with a touchscreen interface!

Moving to the front seats, we are greeted by an all-new dashboard layout. At first, it looks like a bad Photoshop project or lazy design for ease of manufacturing both LHD and RHD variants, but then you realise it’s an intentional design that appeals to both driver and passenger. Behold, the dual cockpit!

The front passenger is presented with a design that is near identical to the one in front of the driver, including the positions of the AC vents. There’s no central display, instead, the passenger gets a 10.2-inch touchscreen to themselves for the infotainment system with Android Auto and Apple CarPlay as standard. It can still show various vehicle telematics as per the old passenger-side displays. There’s also a Burmester audio system along with the usual host of driver assist systems to make the Purosangue ideal for grand touring.

Between the dual-cockpit layout lies a small control panel for the climate settings, massage functions and a few other vehicle settings. Here too you’ll find the mesmerising rotary dial with a touchscreen that rises and sets smoothly, luxuriously and beautifully.

The driver is presented with the latest iteration of the Ferrari steering wheel littered with controls. These controls are still based on haptic touch, but Ferrari seems to have tried to incorporate some audience feedback. The illuminated touch controls are separated by small indents, to let the driver know their fingers are going across different controls without having to look away from the road. The high-res display here is for the digital instrument cluster that can show a broad spectrum of information. There is also a slight change in the Manettino used to cycle between drive modes: it has no Race mode, but it does get an Ice mode for driving on terrains with limited traction.

Speaking of drive modes, let’s talk about the most vital aspect of the Purosangue, its heart. Under the long and tall bonnet, just behind the front axle, sits the latest iteration of Ferrari’s 6.5-litre free-breathing V12. In this large frame, it is tuned to produce 715hp and 716Nm, and it revs to 8250rpm. That makes it the most powerful SUV in the market, and the most powerful engine Ferrari ever put in a four-seater.

If the soundtrack from the B-roll is to be trusted, it’s probably the best-sounding SUV as well.

Codenamed F140IA, this engine has a lot of new and or repositioned components. These modifications help achieve the kind of power delivery required from a relatively relaxed type of car, such as 80% of peak torque from just 2100rpm. Included are cylinder heads from the 812 Competizione, the most bonkers V12 car in Ferrari’s latest lineup.

The heart is mated to an 8-speed dual-clutch housed near the rear axle. The Purosangue has an evolved version of the AWD system used in the GTC4 Lusso. Only some of its 700+ horses and torques are sent to the front wheels and the rest to the rear. Ferrari claims a 0-100kmph time of just 3.3 seconds, 200kmph in 10.6 seconds and a top speed of over 310kmph.

Under the skin, the Purosangue is built on an all-new chassis with lighter construction and increased stiffness over the GTC4. This is where we talk about the new dynamic setup developed by Ferrari to ensure that its SUV’s handling characteristics are deserving of the prancing horse badge.

The Purosangue debuts Ferrari’s new active air suspension technology (or FAST for short) with electric motor actuation. Integrated into each damper, this technology actively controls the wheels and the body to ensure the car stays flat as possible irrespective of the undulations or changes in direction. For extra credit, the clever new Ferrari suspension uses components developed by race-renowned Multimatic. Combined with rear-wheel steering and Side Slip Control 8.0 (Ferrari’s traction control and torque vectoring program), the Purosangue should be capable of defying physics when tested on a circuit. The rear-bias AWD setup should also make it fairly drift-friendly.

Thanks to the new suspension setup, the SUV gets different modes: Soft, Medium and Hard. Most Ferraris usually only get the “bumpy road” mode. This is another detail highlighting the more relaxed nature of the Purosangue compared to its stablemates. However, it does not get any off-road modes which help reduce its SUV-ness. That’s unlike the Bentley Bentayga or Lamborghini Urus which fully embrace the SUV status.

While the Purosangue is slightly less family-friendly than its counterparts with a strictly four-seat layout, it is still fairly practical in terms of boot space. Ferrari states a luggage capacity of 473 litres which is more than what the GTC4 Lusso offered, and similar to that of the Porsche Macan.

As a V12 Ferrari with all-new technologies, the Purosangue has an eye-watering price tag of somewhere around half-a-million USD. In comparison, the likes of a Urus Performante, Aston Martin DBX 707, Bentayga and Porsche Cayenne Turbo GT are cheaper by a couple of hundred grand. But none of them has suicide doors, a high-revving V12, or a Ferrari badge. Rumours are Ferrari is already close to selling out the Purosangue for the next year, with global deliveries to begin in 2023.

What do you make of the Ferrari Purosangue? Is it still Ferrari enough to wear the horse badge with pride? Will it be as fast as a Cayenne Turbo GT? Let us know in the comments below and don’t forget to subscribe to the Auto Loons blog for more cool updates from the car world. You can also follow us on Instagram for more automotive content.