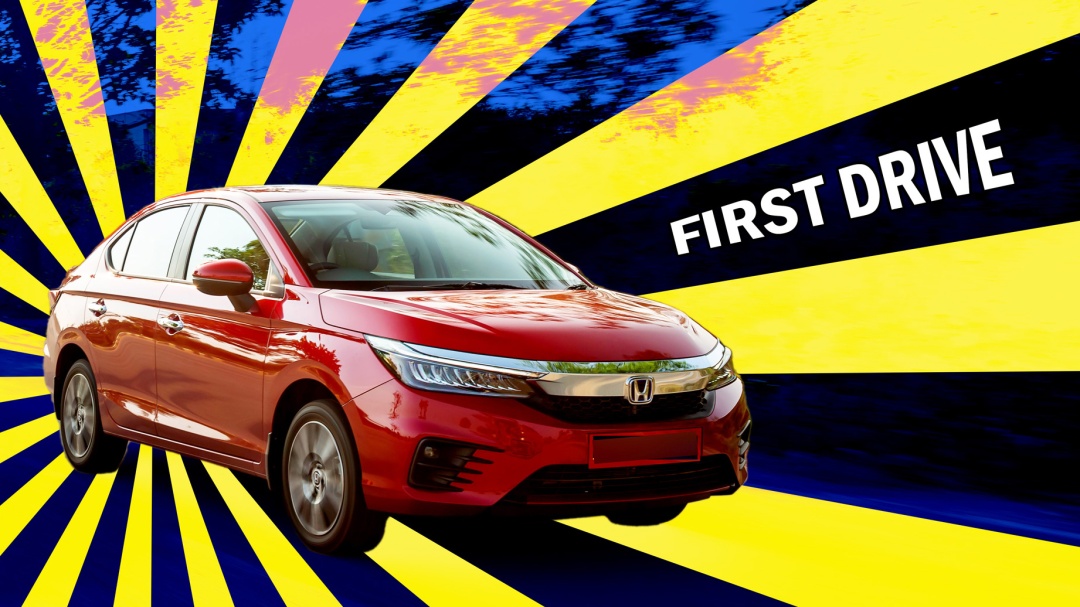 Honda has made the bold step of pushing its hybrid tech in India with little to no government incentives. Its latest electrified powertrain arrives in the shape of the new City e:HEV, i.e., the City Hybrid.

It uses a self-charging hybrid system and even gets the addition of Advanced Driver Assistance Systems (ADAS). I was able to take a short drive of this hybrid sedan on the highway outside of Bengaluru where it was easier to test the ADAS tech. Let’s start with the driving experience.

The City’s hybrid powertrain uses an Atkinson Cycle 1.5-litre petrol engine, two motors, a clutch and a battery. Its combined output stands at a pretty nifty 126hp and 253Nm, making it the most powerful version of the City available in India. The claimed 0-100kph stands at 10 seconds which isn’t particularly quick but the true advantage of the hybrid system is in its rapid acceleration between say 30-60kph and 80-100kph. The uptake in pace isn’t thrilling but it’s better than what you’d get from a regular 1.5-litre petrol powertrain.

Since it doesn’t have any gears to speak of, the single-speed e-CVT offers a pretty smooth experience. However, Honda engineers have been a little extra clever in this regard, tuning the transmission setup to simulate a stepped-CVT during acceleration that gives new hybrid users a familiar driving experience.

Even though the hybrid system is set up for efficiency, it doesn’t hurt the driveability of the sedan. The self-charging hybrid setup can seamlessly switch between EV, hybrid and engine-only modes based on the inputs from your right foot.

Pottle about slowly in the city or in a parking garage and the system uses EV mode for a silent and smooth drive. While cruising on the highway between 80 and 120kmph, the system only uses the Atkinson Cycle petrol engine at RPMs that offer the best fuel economy.

It has regenerative braking

Like any hybrid system, the City e:HEV has special brakes that can also help charge the battery pack during braking. It’s a small battery so it does not hold much charge, and it is better suited for energy deployment than energy storage.

There are paddle shifters behind the steering wheel to control the amount of regen braking. There are three levels. At its peak, it is not as aggressive as regen braking in new EVs but it does a fairly good job of shaving off speed by simply taking your foot off the accelerator. It does have an annoying habit of reverting to a less aggressive level of regen on its own, but maybe that’s something you can learn to work around.

More annoyingly, the paddle shifters are labelled oddly. Pulling on the (-) paddle increases the regen and the (+) paddle lowers it. Apparently, Honda’s logic stands that you’d pull the (-) to reduce speed faster and (+) stands for maintaining speed while coasting.

How does this hybrid system work?

Well, a detailed explanation of the system would be a very long and complex blog post in and of itself. Here’s an abridged version with the basic information. As stated earlier, Honda’s e:HEV hybrid powertrain has a 1.5-litre petrol engine, two motors, a clutch and a battery.

The first of the two motors in this system is an electric drive motor connected to the wheels and acts as the core means of propulsion. However, the more important second motor is the generator motor which connects to everything else, i.e., the engine, the battery and the drive motor.

When the engine isn’t offering enough juice to the generator motor to match your throttle input, the battery feeds its charge to the electric drive motor and fills in the performance gaps. In city use and under heavy acceleration, the City e:HEV will primarily operate in hybrid mode.

In pure EV mode, the engine automatically switches off and only the battery is used to power the electric drive motor. The City e:HEV always starts and sets off in EV mode, even if just for the first few metres. With enough charge, we discovered you can easily manoeuvre the car in and out of parking areas in pure EV mode with gentle throttle inputs.

Lastly, you have the engine-only mode which is engaged at highway speeds when the engine is operating in its optimum efficiency range. At around 80-120kph, the hybrid system engages the clutch that directly connects the engine to the wheels and cuts the electric motors out of the loop. You still replenish the battery when you decelerate but are not using the electric drive motor.

How efficient is it?

Honda claims that the City e:HEV can deliver 26.5kmpl. We didn’t have enough time with the hybrid sedan to gauge its real-world efficiency, but it’s definitely going to be more frugal than a petrol or diesel engine of similar performance. The best part about a hybrid system is that it is more efficient in the stop-go traffic of city commuting, making the sedan suit its name even more.

It also gets ADAS technology

The features on offer include collision mitigation braking, adaptive cruise control, road departure mitigation, auto high beam assist, and lane-keep assist. We tried out every feature apart from the collision mitigation system which is meant to be a last-second safety measure and not something to experiment with on the road.

Out on the highways out of Bangalore, the most useful features I found were adaptive cruise control (ACC) and lane keep assist. The latter only works at speeds over 82kph so it is limited to being used on highways. I think ACC, with stop-go functionality, can be used on certain stretches in the city commute as well. The departure mitigation system felt a bit intrusive in Indian driving conditions where your lane usually disappears or is half occupied by a slow-moving two-wheeler.

Oh, another small but very useful feature addition for the City e:HEV is the electronic parking brake with brake hold assist. It makes stop lights and traffic jams on inclines much less tiring as you won’t need to use the brake pedal in those situations.

Combined with the hybrid powertrain, this is the most advanced version of the City you can have in India.

What about creature comforts?

Since the e:HEV is based on the top-spec City anyway, you get all the other highlight features like six airbags, the Lane Watch Camera system, and an 8-inch touchscreen infotainment system with connected car tech. The semi-digital driver’s display is still one of the best in that segment and you can see all the various animations that keep you informed about what the hybrid powertrain is doing. It’s almost distracting to keep an eye on the left side of the instrument cluster to see whether the car is in hybrid mode, engine mode or EV mode.

You do lose out on some boot space because of the battery. And there is a vertical vent in the rear seats that helps with the cooling of the battery systems.

Honda should have made it look special

While a hybrid powertrain isn’t that exciting, it’s a cool new thing for the Indian mass market. But the only visual distinctions you get for the City e:HEV variant are small and subtle. Honda fits it with a new honeycomb grille behind the usual slab of chrome, a boot lid spoiler, sporty fog lamp housing and a rear diffuser with faux carbon fibre. And the Honda badges front and rear get a blue tinge to hint at its electrified nature, just like Toyota.

The City e:HEV deserved more to stand out for its uniqueness in the segment, and for its higher price. It could have been offered with a new design for the alloy wheels and maybe a variant-exclusive body colour option. How about blue?

Inside the cabin, you see the same lack of distinction for this hybrid variant from the regular City. All Honda is offering is an ivory and black interior theme instead of the usual top-spec beige and black cabin. If you really know cars, you’ll also notice the sensors for the ADAS features sitting just between the IRVM and the windscreen. How about some variant-specific emblems in the seat headrests, or maybe blue ambient lighting in the footwell, or just like a blue Honda badge for the steering wheel? Nope. Nothing special at all.

Even the key fob for the City e:HEV doesn’t get any cosmetic differentiators.

Should you consider buying it?

The Honda City e:HEV is priced at Rs 19.5 lakh (ex-showroom). That’s a premium of around Rs 4.5 lakh. Yes, it offers you great fuel economy which should translate into savings that justify the premium. However, if you do the math with the expensive cost of fuel today, you’ll be doing a LOT of driving to break even.

But there are still other reasons to shortlist the City hybrid as your next car. The hybrid powertrain offers a better driving experience than similar cars in its segment. It’s still a pretty comfortable sedan with decent ride quality and relatively spacious interiors. The City e:HEV is also the only one in its segment to offer ADAS tech, and some of those features do have practical applications even on our roads.

Many buyers of the Honda City are chauffeur driven and they’ll appreciate the added fuel savings in addition to the familiar comfort of the sedan’s rear seat. Plus, the reduced carbon emissions of your new tech-laden sedan also boost your social green score.

The City e:HEV hybrid won’t sway people who were not already considering a premium Honda car. But it’s a good choice for those who were and it seems to be working because it already has a pretty long waiting period.

What do you make of the Honda City Hybrid? Would you consider buying it over the new Skoda Slavia? Let us know in the comments below and don’t forget to subscribe to the Auto Loons blog for more cool updates from the car world. You can also follow us on Instagram for more automotive content.