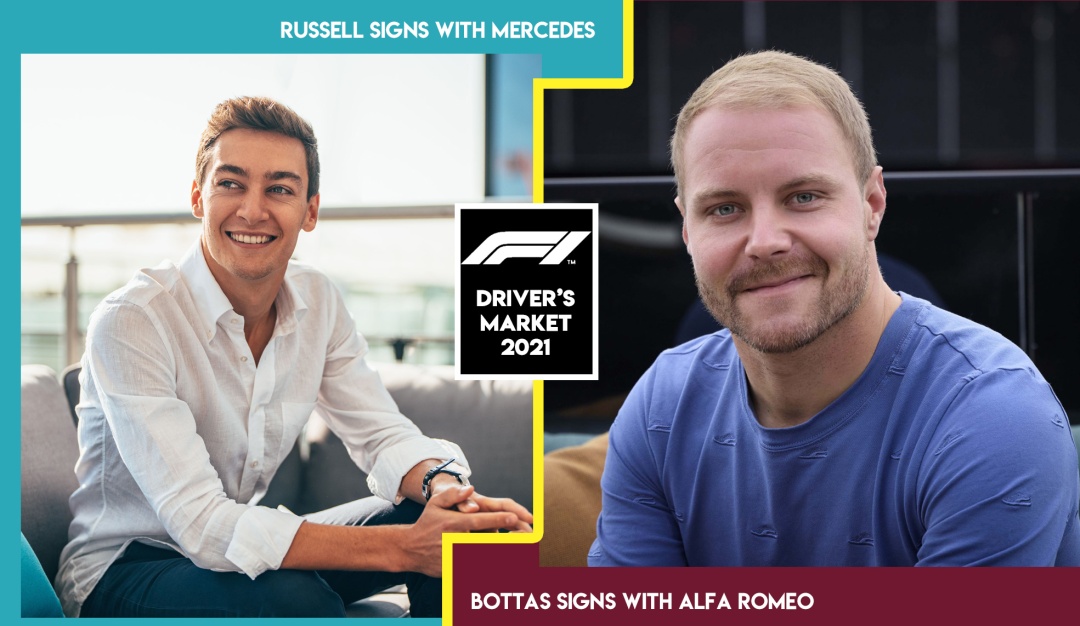 F1 News: 2022 Transfer Updates Include Bottas Switching To Alfa And Being Replaced At Mercedes By Russell

The Formula 1 driver market has gone into a bit of overdrive ahead of the Italian GP and nearly all spots on the 2022 grid are now taken. First, we have the biggest and also the least surprising announcement from Mercedes-AMG F1. Valtteri Bottas will be parting ways with the team at the end of the 2021 season and will be replaced by Williams’ George Russell. The Finn is now his fifth year with the reigning world champions of the turbo-hybrid era but who always stayed in the shadow of his teammate’s success. Bottas has done a great job as Mercedes’ second driver alongside Lewis Hamilton and has been a great team player more often than not. The tensions began to flare up as he slipped from second fastest to third fastest behind Max Verstappen and too often had to sacrifice his own race for Hamilton’s driver’s title race. His performance had been suffering since 2020 due to poor form, compounded by being shown up at the Sakhir GP when Russell stepped in as a substitute for covid-struck Hamilton. The Finn’s struggles have continued into 2021 with no wins and six of his seven podium appearances have only been on the third step.

Meanwhile, George is now in his third season of F1 racing for Williams. The young Brit has seen the team undergo a change in ownership and been part of the changes that have brought them back into the points in the second half of 2021. His progress started getting noticed as he began to consistently break into Q2 of qualifying, and then Q3, and has scored points in two of the last three races. The 2018 Formula 2 Champion will finally get his shot in a front-runner team for the next era of F1 with new cars starting from 2022. He’ll be partnering with Lewis Hamilton and is expected to compete with him on equal terms from the very first race.

Russell’s shift to Mercedes opened up a new spot at Williams which will be filled by the current Red Bull development driver Alex Albon. It’ll be exciting to see a more mature and experienced Albon back on the F1 grid driving for a competent Williams F1 team. To balance things, the team has retained Latifi for a third season as their other driver. Nicholas not only brings sponsors but has also proven to have good race pace. He also scored in two of the last three races and on days when his car is not plagued by technical difficulties, he’s not been far behind Russell. This duo should help Williams continue their upward trajectory in F1 to regain their status as serious contenders in the sport.

No Changes At AlphaTauri For 2022

The Italian-based team of Scuderia AlphaTauri has confirmed that it will retain both of its current drivers for the next season. Pierre Gasly has been putting in consistent performances with only the occasional hindrance and was expected to stay anyway. He’s even secured a podium result in 2021. Meanwhile, rookie teammate Yuki Tsunoda has had a roller coaster start to his F1 career. Despite a multitude of errors and spins, the young Japanese driver still has flashes of immense talent. As he gains confidence and experience, he could be another strong asset for AlphaTauri and be able to fight for points consistently. This duo also seems to have fun chemistry as witnessed in the team’s social media content and both have a growing F1 fanbase.

With the latest round of driver contracts being signed, there is only one spot unconfirmed for the 2022 season. Will Antonio Giovinazzi keep his seat at Alfa Romeo or will he be replaced by new and younger talent from the Scuderia Ferrari academy?

Which Formula 2 driver would you promote to F1 with a seat at Alfa-Sauber for 2022? Let us know in the comments below. Stay tuned for more F1 and cool car content and subscribe to be updated on our latest content.