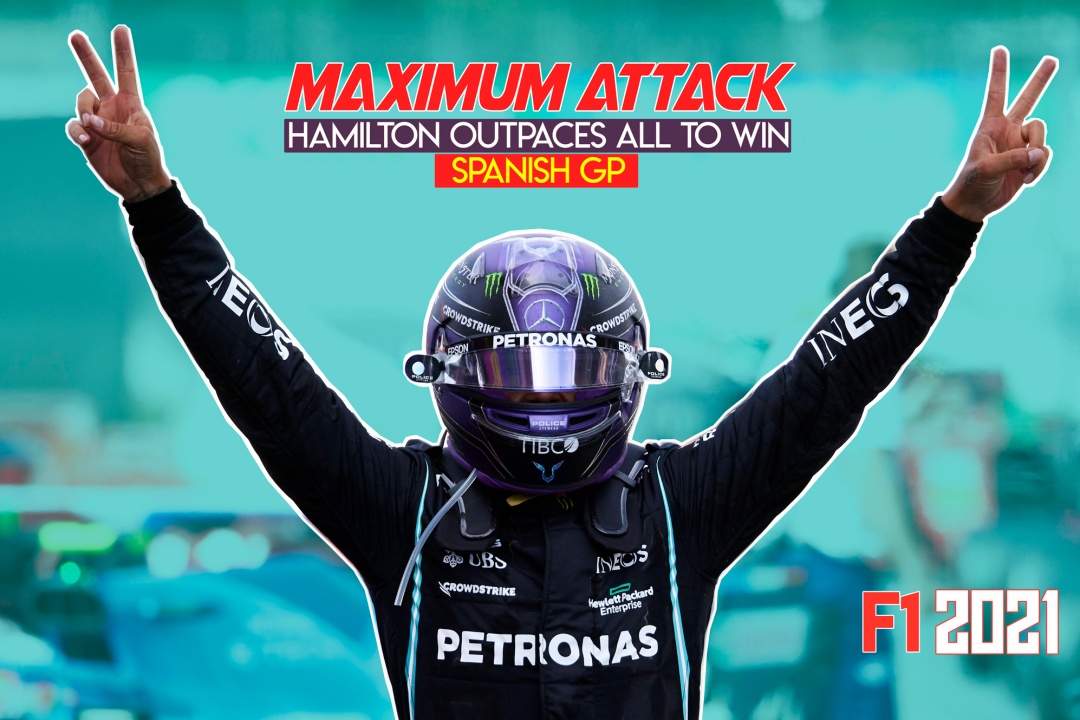 The Catalunya circuit is a great driver’s circuit but also notorious for delivering dull races. Its long sweeping bends make it difficult for the aero-heavy F1 cars to follow each other closely and the lack of hard braking zones also robs drivers of overtaking opportunities. The Spanish GP is often decided by qualifying results and race strategy and has been dominated by Lewis Hamilton who’d won it for the last four times in a row.

In the build-up to qualifying, Mercedes seemed to have a pace advantage over Red Bull. Despite these two championship contenders being quicker than the rest of the field, the margins were quite slim around the Spanish circuit. As a result, everyone opted for the Soft tyres in Q2 to ensure their spot in the final qualifying session, which meant the front runners would all be starting on the same tyre compound. Changing winds and high track temperatures meant that drivers struggled for pace consistency over the course of a fast lap.

Lewis set his fastest time on his first run in Q3, even though he did have to back off slightly in the final sector while Valtteri Bottas was slower by around a tenth of a second. Max Verstappen got tantalisingly close and was able to nab the second spot on the front row, splitting the Mercedes drivers. Hamilton had finally secured his 100th career Pole position, by a margin of three-hundredths of a second. He, his teammate and Max were the only drivers to have lapped quicker than 1min17seconds all weekend.

Charles Leclerc was able to qualify fourth-fastest, ahead of teammate Carlos Sainz who would start 6th on the grid. It was a brilliant qualifying run for Alpine’s Esteban Ocon whose final run was good enough to be fifth fastest, while teammate Fernando Alonso would start from P10. It was Daniel Ricciardo’s best qualifying result in Spain in a long time with the seventh fastest time of the afternoon. Lando Norris was seen as the lead car in Q3 and the lack of any aerodynamic assistance from a car in front, he was only able to qualify ninth fastest. Sergio Perez had a rough Saturday and after a spin at the start of Q3, he only had one attempt which was only good enough to start 8th on the grid. It was later revealed that the Mexican driver was not at 100% during qualifying with a pained shoulder and some dizziness which did affect his performance.

When the lights went out on Sunday, both Max and Lewis got off the line well but the Red Bull driver had a bit more grip on his side of the track thanks to the Formula 3 racing the same weekend. Verstappen went down the inside on Turn 1 and closed the door on Hamilton on the exit, which also slowed up Bottas behind him. This allowed Leclerc to pass the Finn around the outside of Turn 3 and move up into P3. Both Ocon and Sainz lost their place to Ricciardo and Perez in those first few corners. On a track where overtaking is quite difficult without a significant pace advantage, it was an ideal situation for Max to be in the lead and to stay just out of DRS range from Lewis behind. Meanwhile, Bottas’ run was compromised by being stuck behind the Ferrari for the opening few laps. The start of the race was certainly going in favour of the Dutchman.

However, on Lap 8, Yuki Tsunoda’s AlphaTauri packed up as he was rounding Turn 10. The car had simply switched off and would not restart. Its placement meant that the Safety Car was deployed while the stopped car was recovered. This was a second chance for Hamilton and Mercedes, which is one too many if you’re trying to stay ahead of them in Formula 1.

Verstappen managed a decent enough race restart on Lap 11 to stay ahead of Hamilton but the Brit was once again, right on his gearbox. For the next 15 laps, the reigning world champion kept the pressure on the race leader as the two cars distanced themselves from the rest of the pack. Max was pushing hard but Lewis was able to stay within attacking distance which is no easy feat around the Catalunyan circuit. I’m certain that he was sacrificing some of his own tyre life to follow the Red Bull within a second or two but his pace meant that Max was eating through his tyres as well.

After the restart, Bottas had been able to get past Leclerc with DRS but was not near the race leaders. With Perez stuck behind Ricciardo in P6, Mercedes could pit him first and they did on Lap 24. Red Bull had to respond by pitting Verstappen the following lap, changing to a set of fresh Mediums as well. It seemed like a bit of a last-minute call as the pit crew were late with bringing out the rear left tyre which meant that the No.33 was standing still for an extra second. Verstappen rejoined the race in P5 and comfortably ahead of Bottas.

Hamilton stayed out for a few more laps on his Soft tyres and was going decently quick thanks to the clean air in front of him. On his in-lap, Lap 28, he was slightly held up while trying to lap Nikita Mazepin which got us our first Team-to-FIA radio clip of Toto Wolff complaining about the Russian driver for not adhering to blue flags. Verstappen was already within the pit window but this delay was not going to help the Mercedes driver. Despite a quick stop to switch to the Mediums, Lewis was exiting the pitlane as Max was approaching Turn 1. However, it soon became apparent that the Mercedes was a much quicker car on this compound with Hamilton gaining rapidly on race-leader Verstappen.

Verstappen’s tyres were a few laps older and Red Bull only had a set of used Softs left for the race. Meanwhile, Mercedes had an extra set of used Mediums still available to them for both drivers. On top of that, Bottas was within 10 seconds of the race leaders in P3 which left more strategy options on the table for Mercedes. As Hamiton was within two-tenths of Verstappen at the end of Lap 42, he dove into the pits for his second set of Medium tyres and rejoined the race in P3. It was Hungary 2019 all over again!

Red Bull had two options: respond and pit Max for Softs and hope he can fight both Mercedes for track position, or stay out on the single stop strategy to try and hang onto the lead but still guarantee a P2 finish. Some of the issues with Option 1, as apparent to me, are as follows:

When Max did not pit the following lap, I understood that Red Bull had accepted the situation and opted to secure a P2 finish rather than risk it for an unlikely victory. From thereon, Max still had the mountain of a task to prolong the inevitable while also making his tyres last till the end. Meanwhile, Lewis had to make up the 22-second gap in the remaining 22 laps of the race, and he was managing exactly that as he blitzed his way around the track. From there on, it was simply a countdown of the seconds between Hamilton and Verstappen as the lap counter ticked over.

Valtteri was 9 seconds behind Max and as Lewis got within 2 seconds of him, he got his least favourite team radio: Don’t hold up your teammate. The moment came on Lap 52 but to the surprise of most, he didn’t make it particularly easy for Hamilton who had to pull off an overtaking manoeuver into Turn 10 to get past. While it did cost the Brit some time, it did not ruin his chase for the race leader.

The overtake finally came on Lap 61 with Hamilton flying past Verstappen with DRS advantage down the main straight. It was that simple. ith the race win unavailable, Red Bull pitted Max at the end of the lap to switch to fresh Softs to score an extra point for the fastest lap. Bottas had pitted around Lap 54 to switch to used Softs to also aim for the fastest lap which put him comfortably behind in P3.

Hamilton took the chequered flag in Spain for the 6th time, his fifth in a row. Verstappen crossed the line 15 seconds later in P2, with the extra point for the fastest lap that he secured on Lap 63 of 66. Bottas was another 11 seconds behind to claim the final podium spot. These three drivers have now formed the Spanish GP podium for four years running.

While the front three did finish in the same order they started, the 2021 Spanish GP did offer more excitement than anticipated. Mind you, the bar was set quite low. There were a fair number of overtakes in the middle order and outside of the points which made for an interesting race overall.

Charles Leclerc had a bit of a lonely race in P4 but that’s a strong result that Ferrari can be happy with. But we saw a somewhat interesting battle for 5th between Perez and Ricciardo. The McLaren driver did his best to fend off the Red Bull driver, even weaving down the main straight to break the possibility of a tow before being told off by race control. In the end, we saw Perez make a brave overtake into Turn 1, at the start of Lap 46, braking late and going around the outside of the McLaren.

Carlos Sainz’s first home race in a Ferrari did not go quite as he had hoped. He had a decent qualifying but a rough race, losing a few places at the start of the race. He then spent the rest of his afternoon trying to recover from that start and crossed the finish line in P7. Meanwhile, Lando Norris seemed to be off the pace of Ferrari and his teammate throughout the weekend but secured the best acceptable result with a P8 finish which keeps McLaren ahead of Ferrari in the constructor’s standings.

Like Sainz, Esteban Ocon had a great qualifying but an awful race as he also lost spots at the start of the race. Despite sticking with the one-stop strategy, he was able to secure two points by crossing the line in P9. However, teammate Fernando Alonso came off worse from the single stop plan and had to pit for new tyres on Lap 62 which put him at the back of the field. Alonso also had more track battles with the Aston Martins during the race which would not have helped his tyre management whatsoever.

The best recovery drive of the race was executed by Pierre Gasly. He picked up an early penalty when he placed his car a bit too far forward from his grid spot at the start of the race. This meant his pit stop was going to be 5 seconds longer which would have thrown the team’s race strategy off. But the AlphaTauri driver put in a solid performance to make his way back up the grid and pick up the final point in P10 by overtaking Lance Stroll in the closing laps.

At the end of the Spanish GP, Mercedes stands 29 points clear of Red Bull and Hamilton has extended his lead over Verstappen to 14 points. Bottas has climbed up to third in the driver’s standings despite his Imola DNF and is 15 points clear of Perez. While the circuit in Barcelona was better suited to the Mercs, the next track is likely to suit the Bulls: Monaco baby. So, stay tuned for more F1 updates and subscribe for plenty more automotive content and follow us on Twitter & Instagram (@autoloons).