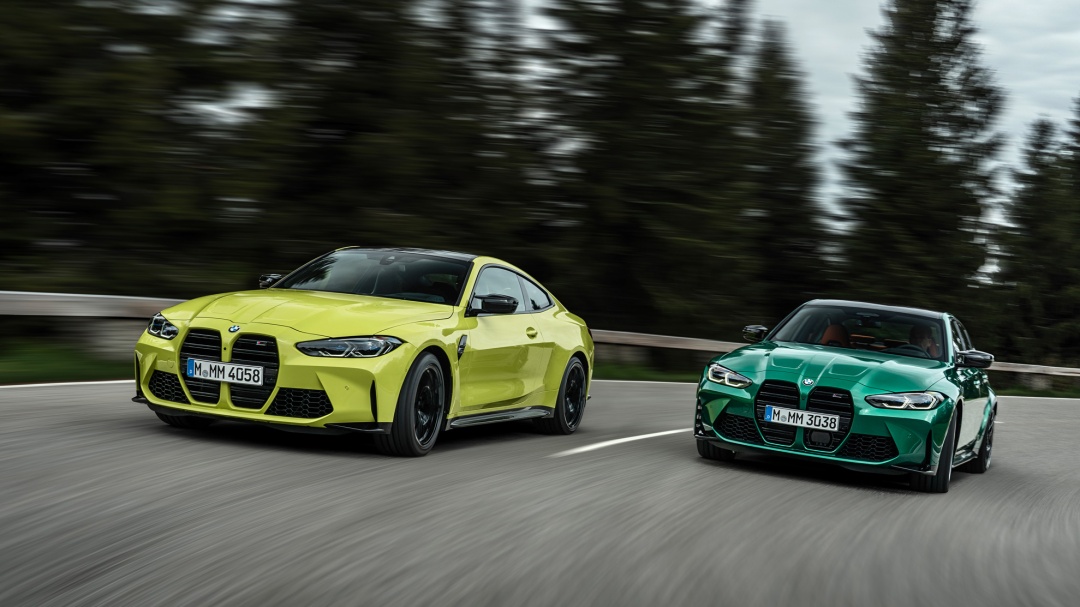 BMW has taken the covers off the new-gen M3 sedan and M4 coupe and many on the internet wish they hadn’t. The carmaker’s current design language has already been criticised a lot for the most polarising element – the disproportionately large kidney grilles. It’s most shocking version was seen on the regular 4 Series Coupe which was unveiled in June. Now, M-specific versions of the same feature on the new-gen M3 and M4. While many internet fans have been quick to trash it, I fear it might be a case of a design that is not photogenic and might even become less jarring over time.

Let’s get into the details to see what the new versions of the iconic M3 and its coupe/convertible spinoff bring to the table:

That front end is not botched styling, it’s functional

Sticking with the issue of the large-nostrilled grille, there appears to be some actual rationale behind this design choice. The vertical kidneys are apparently integral for uncompromised performance as they help meet the cooling air requirement of the M3 and M4 engines. There are more large vents and intakes for channelling air to further cool the engine, cool the brakes and also for better aerodynamics.

Both pack a hefty punch over their regular versions

The M3 and M4 will be powered by the same 3.0-litre, in-line six, twin-turbocharged engine making 480hp and 550Nm. That’s a bump of more than 100 horsepower and newton metres of torque over the M340i and M440i variants which are the most powerful versions of the regular 3-series and 4-series.

They’ll get a 6-speed manual

It seems that carmakers are opting to keep the manual shifter around for their enthusiastic driver’s range of models. While still out-of-reach for most of us, it’s good to know that the new M3 and M4 will still be offered with a good ole H-pattern stick shift and a clutch pedal.

Get the same clever M xDrive system as the M5

BMW’s all-wheel-drive system is known as the xDrive and it’s being added to the M3 and M4 models for the first time ever. However, since the F90 M5, the M version of the system packs a fair bit of intelligent driving technology. As seen in more premium BMW M models, it allows the driver to switch between 4WD and 2WD (the latter by switching off stability control). Even in 4WD mode, it’s a rear-biased drivetrain and these models feature the Active M differential at the rear axle. So, you can have the new M3 and M4 with more power, a manual gearbox, 4WD for track times and 2WD for burning rubber.

Competition variants have more power but an automatic only

The even sportier M3 and M4 Competition variants extract even more performance from the 3.0-litre turbocharged straight-six to offer 510hp and 650Nm. Unfortunately, they’re only offered with BMW’s 8-speed M Steptronic automatic transmission unlike the 6-speed manual of the regular M3 and M4.

M Performance Exhaust Looks As Bad As The Grille

The regular M3 and M4 get a quad-exit exhaust anyway which works in the noisy mode as standard and has electronically controlled flaps for the quiet mode for pulling out of your parking without waking the neighbours or your Tinder date in the morning. Like all M models, there’s the option of a throatier M Performance exhaust for the new-gen duo. While it does get a sportier-looking diffuser as part of the upgrade, the new exhaust styling is as polarising as the new vertical kidney grille. It looks like what I’d enjoy as a kid while customising my car in a Need For Speed game with its bunched up styling. There’s a way to do centrally-located multi-exit exhaust tips and this ain’t it. For example, the previous-generation Chevy Corvette, Lexus LFA and Ferrari 458.

The new-gen M3 and M4 have a wider stance than their regular versions and are understandably bigger than their predecessors. Both M cars get staggered wheel sizes with 18-inches up front and 19-inch light-alloys at the rear as standard. There are plenty of wheel designs to choose from as well and the M Performance wheels go up to 21-inch at the front and 22-inch at the rear.

Both cars come with a carbon-fibre roof as standard while there are plenty of optional M Performance extras too. That includes the more aggressive aero elements like the front and rear aero flicks, front splitter, grille, rear lip spoiler, rear wing, mirror caps, side skirts, front air vents, rear diffuser and the air curtains.

In order to deliver the driving experience expected of an M3/M4, it needs to offer more than just extra power and a manual gearbox. The chassis for these models has been tinkered for increased torsional rigidity. They also get model-specific bracing for the engine compartment, front axle subframe with an aluminium shear panel and a rear axle subframe with a rigid connection to the body, all for better body control and handling through a series of corners.

Both the M3 sedan and M4 coupe feature adaptive suspension with electronically controlled shock absorbers and M-specific tuning for both axles.

Perhaps the more relevant update for most owners of the new-gen M3 and M4 is the new cabin instead of the front-end styling. These models get interiors very similar to their regular versions but with lots of M-specific modifications.

They get the M steering wheel with M buttons and an M Mode button in the central console as well. Both cars can be opted with a lot of carbon fibre around the cabin as well and the M4 gets particularly sporty bucket seats. It also gets sportier paddle shifters than the M3 sedan. Another instance of the M-specific interior is the abundance of M branding and red accents.

Both the M3 and M4 now get a 12.3-inch digital instrument cluster and BMW’s latest 10.25-inch touchscreen infotainment system. These displays feature M-specific programs to toggle through the drivetrain settings, two-step brake response and 10-stage traction control. It also debuts M Drive Professional which is made for track telemetrics like laptimer and drift analyser.

There will be an M3 Touring

The only thing cooler than a fast sedan is a fast wagon. BMW has previously offered the most powerful variant of the regular sedan in the Touring body shape but this time the carmaker seemed to have acknowledged the opportunity in a market dominated by Audi and AMG. So, for the first time, there will be an official M3 Touring, aka, an M3 wagon. With that front-end styling, it won’t be a sleeper by any means but it should pack a fair bit of gusto. There will also be an M4 Convertible later on.

These are the 10 main things you should know about the all-new M3 and M4. I have said plenty regarding the front styling but I’ll add that it presents an opportunity for aftermarket brands to offer better versions. It’s almost like BMW has done a role-reversal with tuners and tasked them with designing a more sensible front grille and bumper after selling it with a gaudy look from factory. What do you think of the new M3 and M4? Do you reckon we would come to accept those grilles or will BMW have to take a step backwards for the next M models? Share your thoughts in the comments below the gallery and don’t forget to subscribe to The Auto Loons for more cool updates from the car world.