BMW i8: A Confession

BMW gets a lot of flak these days for its new design language that is headlined by large and grotesque grilles. Even if they have a functional purpose for that design, I agree that the new design is unappetizing. However, it wasn’t that long ago when BMW made some really good looking cars including one of the coolest hybrids of the 2010s. I’m talking about the i8 sports coupe.

The Origins
Our first glimpse of the i8 was the BMW EfficientDynamics Concept that was unveiled in 2009 at the International Motor Show Germany. The idea was to combine athletic performance with lower emissions using hybrid technology. Until then, all hybrids were boring, dreary-lookings bits of metal and plastic being driven too slowly. BMW’s concept was ready to turn that notion on its head. The concept featured a 1.5-litre, 3-pot turbodiesel making 163hp and 290Nm which was delivered to the rear wheels via a dual-clutch transmission. It was supported by two electric motors – one to drive the front wheels and one positioned between the engine and the gearbox. The front one offered an extra 80hp and 220Nm while the smaller motor had a more complex role to play. It could either supplement the diesel engine (also referred to as torque filling) or assist in all-electric mode, or it would act as a generator to charge the lithium-polymer battery while coasting or braking. At peak performance, this hybrid powertrain offered 356hp and 800Nm under the driver’s right foot. 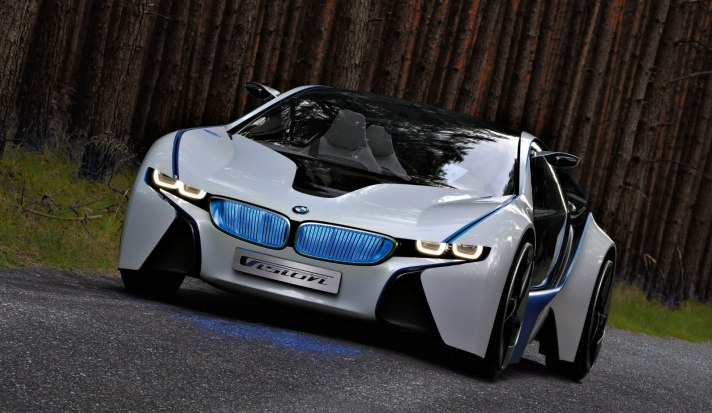 With the Efficient Dynamics Concept, the core concept for the BMW hybrid powertrain was established. The Munich based carmaker then unveiled it as the i8 Concept at the 2011 Frankfurt Motor Show. Its diesel unit had been swapped out for a 1.5-litre petrol engine turbocharged to heck while the rest of the hybrid setup remained the same and was previewed in principle by the i3 Concept. Despite its 2+2 layout, it was a mid-engined sports car. The new powertrain had a combined output of 349hp and 550Nm, an EV range of 35km and a hybrid mileage claim of 34.48kmpl. 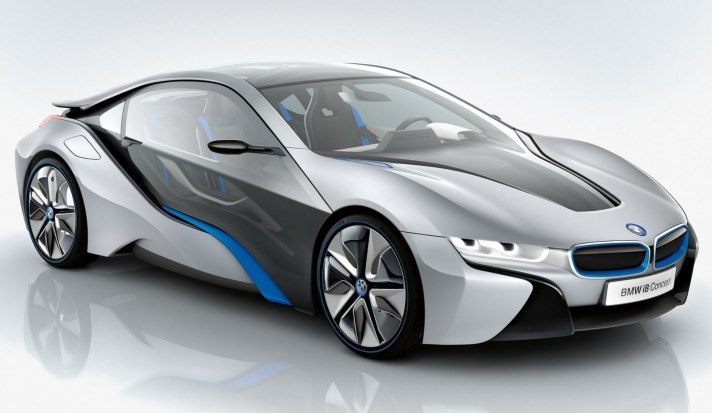 Final Product
BMW unveiled the production-spec version of the i8 Coupe two years later and production began in the first half of 2014. In a pleasant surprise, the final version ended up looking a lot like the 2011 concept. It still gets dihedral butterfly doors with black contrasts and blue accents most prominently visible on the BMW kidney grilles. The BMW engineers worked very hard to make the i8 be as visually stunning as it is aerodynamically efficient. Even today, its flowing arches, sweeping crests and sharp cutaways look a bit futuristic. Only the skinny wheels betray its realistic nature.

Another key aspect of the BMW i8’s LifeDrive architecture was the focus on weight saving. The final car had a curb weight of just under 1,500kg despite the hybrid powertrain. Its passenger cell is made completely out of carbon fibre while the rest of the vehicle structure is made from aluminium to house the drive and chassis technology. The body panels are sculpted out of thermoplastic polymers and it has chemically hardened glass which is now commonly found on touchscreen smartphones.

Its low-slung body, 50:50 weight distribution, AWD performance and aerodynamically optimised body promise a dynamic driving experience. The three-part plug-in hybrid powertrain of the i8 offered a combined output of 357hp and 570Nm. The power per displacement ratio of its 3-pot petrol engine was the highest BMW had ever produced at 154hp per litre. Its top speed is limited to 250kph while the 0-100kph sprint takes 4.4 seconds. In pure EV mode, its 131hp and 250Nm electric motor driving the front wheels, the i8 had a claimed range of 37km from its 7.1kWh battery pack. As per the EU test cycle, this hybrid sportscar could achieve 47.62kmpl while BMW’s real-world estimate stood at a more realistic 14kmpl. Still, that’s not bad at all for a cool-looking Porsche 911 rival.

The BMW i8 started in Comfort mode – quietly. That’s because it is finding the efficient balance between the petrol engine and electric motors so it would start in pure EV mode. Both COMFORT and ECO PRO drive modes could be used to drive on electricity only using the eDrive button. Also, the BMW i8 features a very smart ECU that constantly balances the performance between all the hybrid components. In Comfort, it tries to offer a balance of sportiness and efficiency. Switch to Sport and the drivetrain gets a lot livelier offering sharper performance and manual gear changes too. It also activates maximum energy recuperation during coasting and braking to ensure the battery is charged enough to offer peak performance at all times. When parked, you can plug the i8 into an EV charger to refill its battery before setting off on another zippy ride in sports mode or simply use EV mode in a town with tight emission norms.

From all the videos that I have seen, the BMW i8 sounds great. It sounds a lot better than you’d expect to based on the engine specifications. Even though BMW does pump in some artificial sound into the cabin, the 3-pot petrol engine sounds quite enthusiastic. However, there also seems to be a common complaint – its not AS sporty as something like the 911. After all, the i8 is tuned to find the balance between performance and efficiency, so it’s not geared to be a machine to hoon about in.

Just as important as the driving feel of the BMW i8, was the cabin. Yes, it was touted to be the future of sportscars that also cared for the trees. But the interior was still made of nice materials and featured a familiar-looking BMW dashboard with a few new screens. It wasn’t some eco-mentalist’s wet dream like the i3 or the Polestar Precept, it felt like a premium sports car.

The BMW i8 was a fun-to-drive GT car for two. It was priced competitively too, starting around £100,000.

The Problem
This is where we get personal with the i8. I never really liked it when it was first launched. Sure, it looked cool and its concept-debut in the Mission Impossible 4 movie was special. But those performance specs just didn’t match its outlandish looks. I’ll admit, I had little understanding of the hybrid technology at the time. But I still expected a lot more from the BMW i8.

In some ways, the i8 got a bit unlucky with its timing too. At the same 2013 Frankfurt Motor Show that BMW unveiled the i8, Porsche debuted the production-spec 918 – a hybrid with nearly 900hp. A year before that, McLaren had unveiled the P1 – another 900hp hybrid. The P1 and the 918 would then be joined by the Ferrari LaFerrari to become the Holy Trinity that would redefine the hypercar segment. As if the hybrid competition wasn’t tough enough, some of the other big launches and debuts around 2013 and 2014 included the likes of the Ferrari 458 Speciale, Jaguar F-Type coupe and a Porsche Cayman GTS. A year later, Honda revived an iconic name to introduce its own hybrid sportscar – the NSX. It too offered more performance and used more interesting technology.

You could argue that the BMW i8 served a different purpose than the other cars. But it’s easy to see why its specifications made it seem… unimpressive. It was simply overshadowed by the might of its peers.

The Confession
As I have aged and my understanding of cars has expanded ever so slightly, I have new-found affection for the BMW i8. Perhaps triggered by the thought of not being able to see anything like it, now or in the near future. The BMW i8 wasn’t the coolest hybrid of its time but that’s because it wasn’t a mega car like the Holy Trinity. It was almost ahead of its time because of the way it could balance between a lazy Sunday drive and a spirited hoon while offering great fuel economy. Sure, there were compromises but it made the car a great daily driver. It is still a stunning looking car that turns heads even today. To borrow an expression from someone who got to actually drive it, the i8 was the genesis of the hybrid sportscar.

Maybe someday, I’ll get up close with it, drive it and let it know that I was wrong to belittle it. Besides, I’ve always kind of liked the BMW i8 anyway.