Ford has joined the latest automotive trend by building an electric crossover SUV. But to make sure it stands out from the crowd and got the attention an all-new Ford EV deserves, they’ve called it the Mustang Mach-E.

Yeah, it’s an electric, five-door SUV and it’s technically a Ford Mustang. We’ve known this was coming for some time so the unpleasantness isn’t shocking. Credit to Ford, the Mach-E borrows enough styling cues from the Mustang muscle car for the cars to look related for sure. It is the first time in the 55 years since the Mustang was introduced that Ford has expanded the brand. 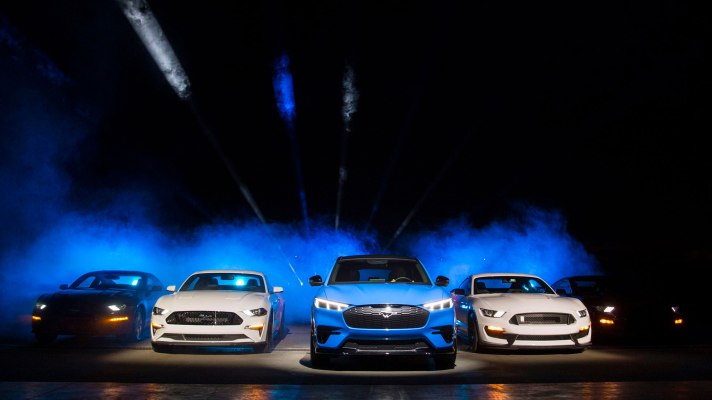 The Mustang Mach-E will be offered with two lithium-ion battery sizes – 75.7kWh standard-range version and a 98.8kWh extended-range option. It will be available in RWD and all-wheel-drive variants at launch in 2020, the latter being called the Mach-E 4 that can apply torque independently to the front and rear axles. In the RWD versions, the normal battery will offer 254bhp of power, 306Nm of torque and 450km of WLTP range while the bigger battery offers an extra 27bhp and additional 145km of range. It claims a 0-100kph of under 8 seconds. The AWD Mach-E with the regular battery has 254bhp of power, 429Nm of torque and just under 420km of range while the bigger battery offers 78bhp more and an extra 120km of range. This one is a second quicker to accelerate from nought to 100kph. For all variants, its top-speed is capped at 179kph. In terms of charging, the batteries are liquid-cooled which allows for fast charging. The smaller battery’s max charging rate is 130kW while the bigger battery charging rate goes up to 150kW. 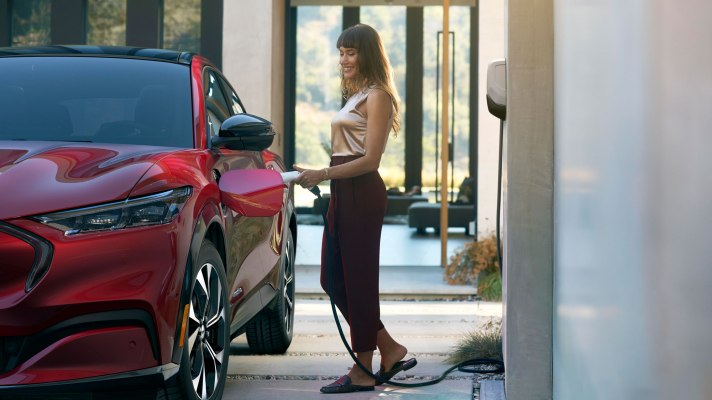 Ford will be offering two performance variants as well – GT and GT Performance Edition. The regular GT version aims for a 0-96kph time of under 4 seconds while the other one aims to do the same in mid-3 seconds. Both GT configurations are expected to feature a performance rating of 342kW of power and 830Nm of torque. Deliveries for the Mach-E GT variants will start in Spring 2021 but Ford is accepting reservations as of now. Ford promises the Mach-E will deliver a fun driving experience and the GT Performance Edition variant will be equipped with a MagneRide damping system and adaptive suspension.

It’s built on an all-new electric architecture with batteries inside the underbody that maximises the cabin space. On the surface, the Mach-E resembles the Mustang thanks to iconic design elements such as the bonnet, the rear haunches, aggressive headlights and tri-bar taillamps. 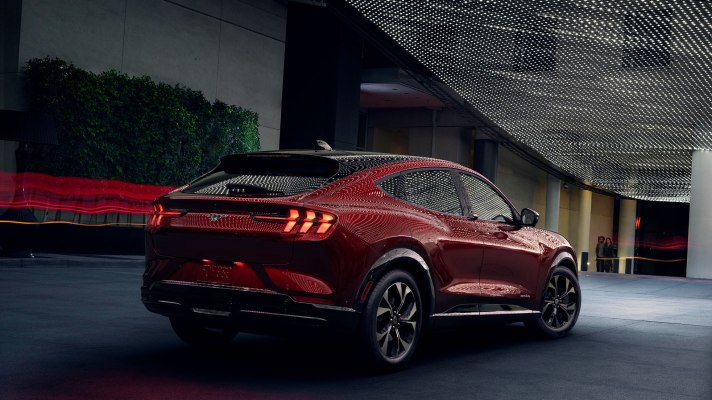 Since the EV doesn’t need a front grille, Ford found a clever way to indent the grille design into the front of the Mach-E and place the iconic galloping pony logo on it. From the side profile, the Mach-E has a sloping coupe roofline but Ford uses a clever trick to make it look even sportier – where the body-coloured section of the roofline begins sloping towards the rear end, the roof continues at a taller height in black which ensures headroom for the rear passengers. The Mach-E design was led by Jason Castriota who is also credited with the likes of the SSC Tuatara hypercar. 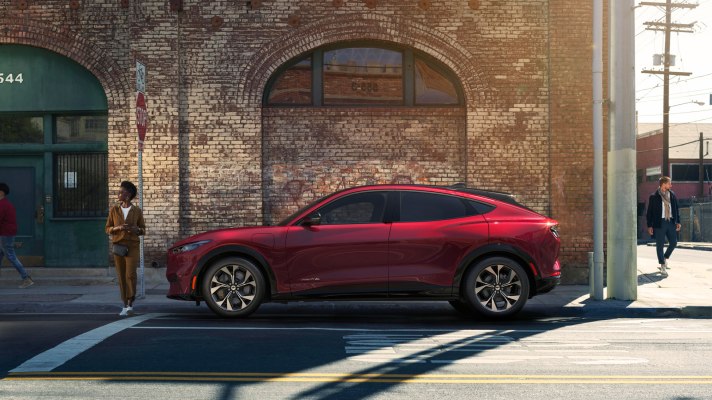 An interesting design aspect is the lack of any door handles with Ford opting for a smart key, using the phone as a key or using a 4-digit password that you enter into the B-pillar. The Mach-E also gets two boots – one in the back and one up front. The frunk even gets a drain so if there’s anything messy, do it there. 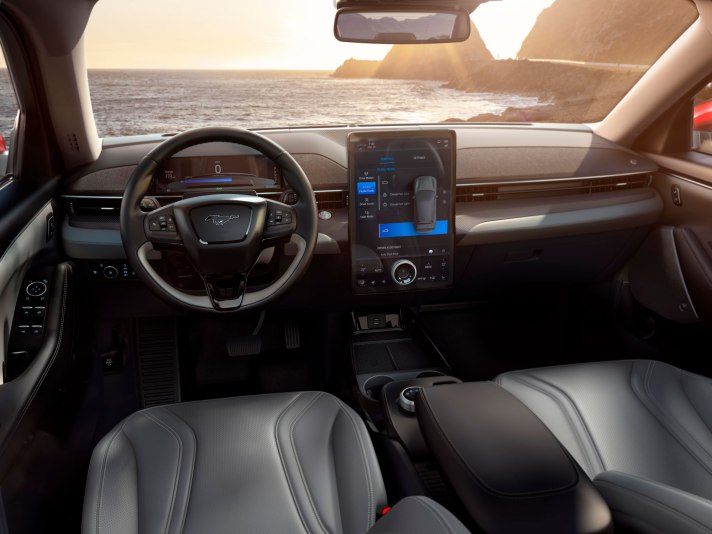 The cabin of the Ford Mustang Mach-E doesn’t feature anything that would be noticeably unique but that’s a good thing. It’s reassuring for its target audience that the Mach-E will be easy to drive and live with. The steering wheel also has the pony logo on it with actual buttons for various controls and the dashboard layout is much simpler in design. The driver’s instrument cluster is a slender 10.2-inch screen for all the relevant vehicle information such as ‘ground speed’, range, lights, alerts and so on.

There is a Tesla-like 15.5-inch vertical touchscreen interface in the centre of the dash but this one doesn’t slope towards you. It’s more upright in design with a tactile volume control knob integrated into the lower section. I quite like that physical element in the world full of touchy-feely infotainment controls. Even the drive selector is a rotary dial in the central console tunnel between the two front seats. The giant screen uses the latest generation of the SYNC infotainment system and is compatible with smartphones. It allows Mach-E users to open phone apps and native apps at the same time. As Jack Rix gave an example, you can have WAZE open for your navigation and the Ford map open to see where all the charging stations are. Neat. Overall, the Mustang Mach-E has a nice interior as a US$50,000 (approx. with options) electric crossover SUV.

Ps, did I mention that Ford has brought in Idris Elba as the brand ambassador for the Mustang Mach-E?

In many ways, the Ford Mustang Mach-E is a direct rival to another American EV crossover – the Tesla Model Y. In terms of range, interior and screens, they are competitors. What do you think of the Mach-E? What do you make of Ford’s decision to make it a Mustang sibling? Share your thoughts in the comments below and don’t forget to subscribe to The Auto Loons for more cool updates from the car world. 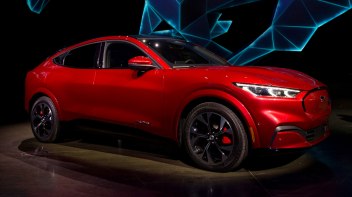 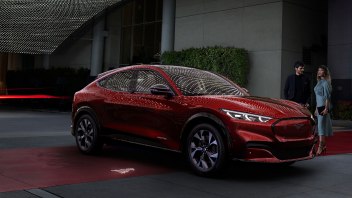 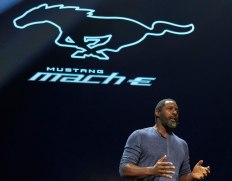 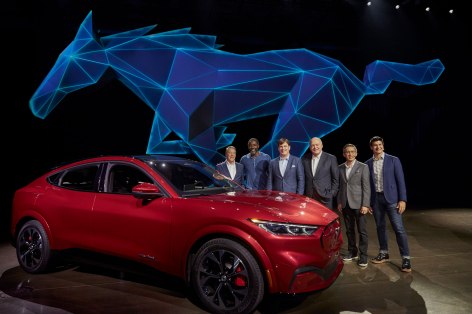 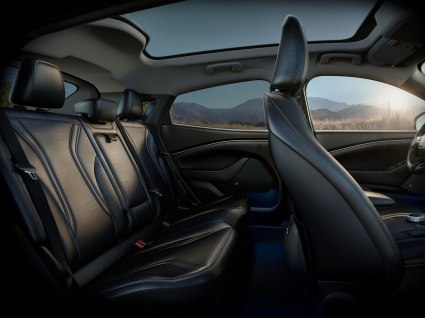 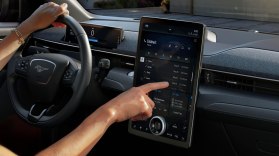 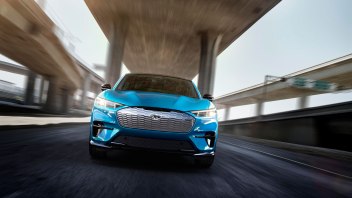 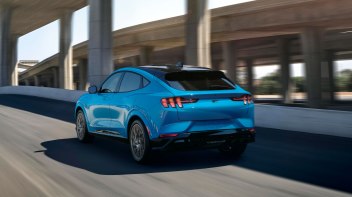 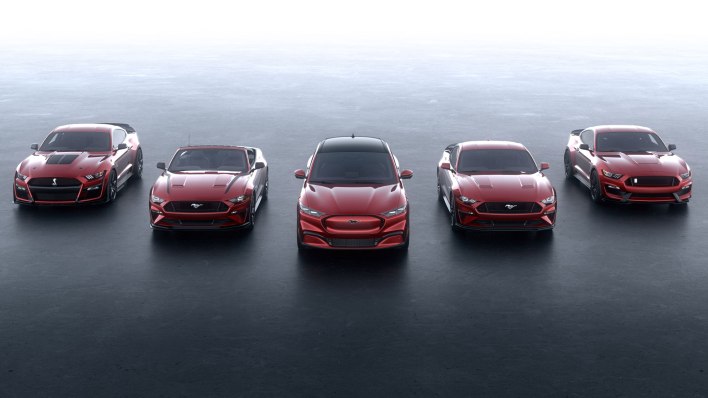