It’s official, the Force India name will not come up in Formula One this year. Instead, we now have a ‘new’ team with new owners but still a very pink livery – it’s SportPesa Racing Point.

Racing Point is what the F1 team is called with SportPesa as their title sponsor along with BWT as the principal sponsor on the new car – the RP19. SportPesa is a tech and entertainment company that focuses on sports and entertainment news and real money gaming services. Meanwhile, BWT or Best Water Treatment is the brand that became a sponsor for the Force India team in 2017 and brought the pink livery to F1. This 2019 livery, however, has an extra splashing of blue and looks quite alright in my opinion. And I’d just gotten used to thinking of those cars as the Pink Panthers of F1.

This team’s driver lineup includes Sergio Perez and the son of the team owner, Lance Stroll. Perez brings an immense amount of talent and experience to the team which should make them strong contenders for a consistent top 10 finish. Stroll has his final chance to show that he deserves to be on the grid on the basis of merit, not just daddy’s bank. Racing Point keeps Otmar Sznafnauer as Team Principal and CEO and when asked about his opinion on his new drivers, he mentioned: “I think our drivers will bring out the best in each other. They are both hugely motivated for the new season and we will work hard to give them a car that matches their talents.”

The car is expected to undergo significant development since the unveil till the first race in Melbourne and even more so after the early rounds outside of Europe. Racing Point’s Technical Director, Andrew Green, is particularly thrilled with the change in fortunes which allows for more tools and faster development as compared to the lean-budgeted seasons as Force India.

Racing Point’s RP19 will be using a Mercedes-AMG F1 M10 EQ Power+ engine and Merc’s 8-speed semi-automatic transmission. It’ll have an FIA single ECU with an in-house design for the electrical harness. The 920E brake callipers with the in house design brake-by-wire system will help it shed speed.

You can check out the new RP19 from a few more angles in the gallery below. What do you think of it? What are your expectations from them in 2019? Let us know in the comments below and don’t forget to subscribe to stay tuned to the Auto Loons for more updates on Formula 1. 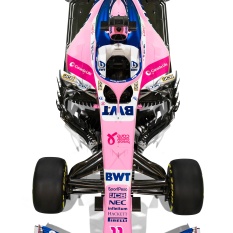 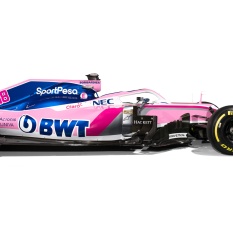