The new backbenchers of F1 are the third ones to unveil their 2019 livery and new title sponsor – ROKiT. This is their latest car that will compete in the 2019 F1 season and it is called the Williams Mercedes FW42.

Williams Racing has been part of F1 and motorsport for a long time but has been struggling to perform in the last couple of years, particularly since Valtteri Bottas left to join engine-supplier Mercedes’ factory team. They still had Felipe Massa in 2017 but the second seat was sold to Lance Stroll whose performance was consistently disappointing. In 2018, the team finished dead last as they struggled with poor aerodynamics and an underperforming duo of drivers – the rookie Sergey Sirotkin who did well on occasions and the disappointing Lance Stroll.

The new livery sports the ROKiT branding quite prominently while carrying forward the white and blue theme albeit in new shades. As the car name implies, they are still powered by a Mercedes engine and are a sister team to some extent.

UPDATE: The livery was unveiled on 11 Feb, but it was just a 2018 FW41 with the new wings. It is reported that Williams is running behind schedule with the new car and had to cancel a planned shakedown run. So far, they have only released official renders of the FW42 while the rest of the competition is already getting a few laps in. 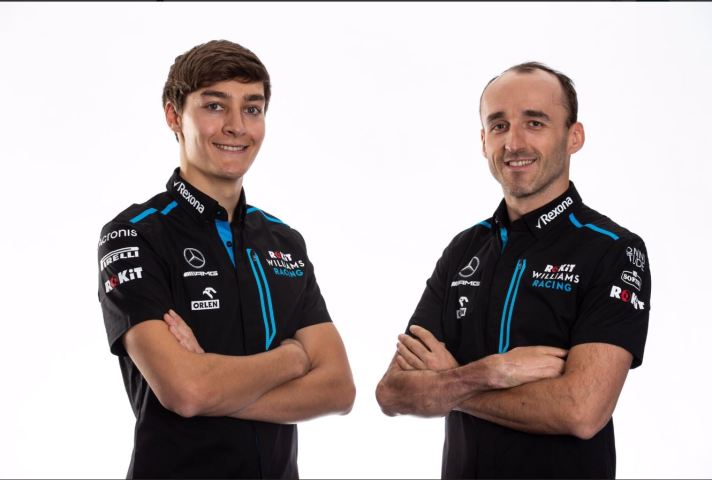 Williams also has a promising lineup of drivers for the 2019 F1 season with Formula 2 winner George Russell who will be joined by Robert Kubica who is making a comeback after nearly a decade’s absence owing to his grave injury. If they can get a good car, this duo seems to be quite capable of achieving some promising results in the new season. Not sure if that would be enough to get them up and out of last place as the rest of the field has stepped their game up as well.

What/Who is ROKiT you wonder? It is a recently launched telecom brand that deals in affordable smartphones and Wi-Fi networking. How/Why are they getting into F1 sponsorships? No answers yet. Let’s hope they brought enough funding to make Williams a worthy team again.

You can check out the new FW42 from a few more angles in the gallery below. What do you think of it? What are your expectations from them in 2019? Let us know in the comments below and don’t forget to subscribe to stay tuned to the Auto Loons for more updates on Formula 1.