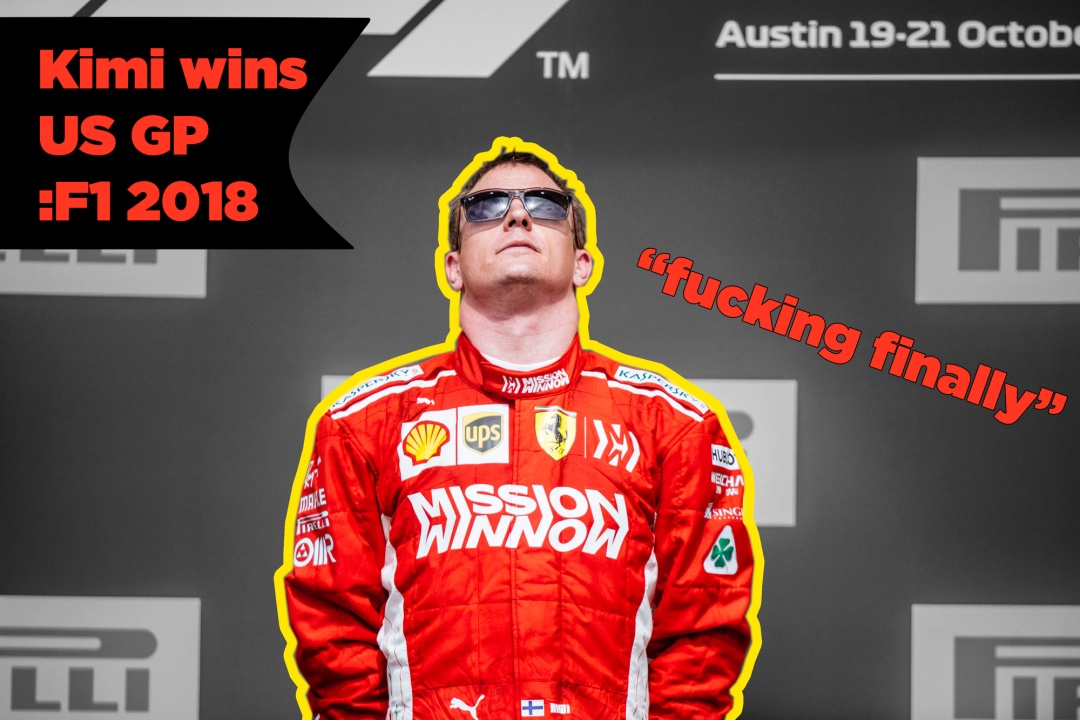 Raikkönen soars to victory at the American GP: F1 2018

When we were heading to the US after the Japanese GP, we thought we knew how things would play out – Hamilton wins his fifth world title, Vettel chokes and loses his last statistical chance, Bottas plays by team orders and more of the usual. But how wrong we were and quite thankfully so.

Practice on Friday got underway with the Circuit of the Americas track in wet and damp conditions. Not that it made Lewis Hamilton any slower as he showed his dominant form around this particular circuit where has won 5 out of the 6 times it has hosted F1 races. Charles Leclerc had run off into the gravel and brought a lot of it onto the track as he drove back on which brought on the red flags to stop the session and clean that part of the circuit. The rain continued and there was a lot of standing water on track which delayed the second practice session that day. At the end of the wet practice, there was bad news for Sebastian Vettel who had been given a 3-place grid penalty for speeding under the red flags at the end of FP1. It was only in FP3 that the teams could let their cars loose on the dry track and get some data on how the tyres behaved and test the setup. 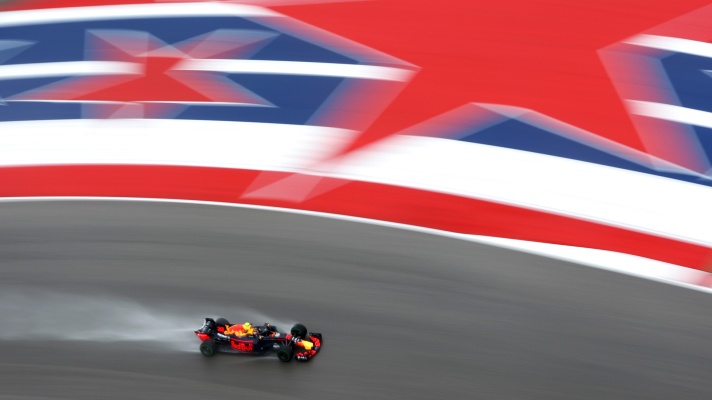 Hamilton was blitzing the lap times in qualifying with the Ferraris right behind him and outpacing Bottas with Red Bull competitively close. Unfortunately, Max Verstappen broke his car on the kerbs in Q1 which meant he’d need new parts and thus incur grid penalties, starting 18th on Sunday. In Q3, Lewis took pole once again with Vettel just six-hundredths of a second slower for the second-fastest time, just one-hundredth of a second ahead of teammate Kimi Raikkonen. However, the German’s penalty would put him 5th on the starting grid and move Kimi, Valtteri Bottas and Daniel Ricciardo up the order to start 2nd, 3rd and 4th respectively. Esteban Ocon put in a fantastic qualifying lap to be 6th fastest ahead of Nico Hulkenberg and outqualifying teammate Sergio Perez who was 10th fastest. Meanwhile, Romain Grosjean was 8th fastest and Leclerc managed to qualify 9th fastest on his first F1 race at the Circuit of the Americas.

As the cars lined up on the grid, Hamilton parked up on pole position with Raikkonen alongside him on the front row, Vettel on the third row and Verstappen at the back of the grid – it all seemed calm. The lights went out and as the Mercedes and Ferrari sped up the hill, Kimi had the better start and was ahead of Lewis down the inside as they headed into Turn 1. An audible gasp escaped me as my fist clenched the TV remote as the Iceman defended brilliantly and kept P1 with the World Champion and 18 others in tow. Jubilation and relief followed as the pack headed through the twisty bits with Kimi’s Ferrari in the lead and then came the best kind of racing-fan feeling in the world – hope. Not for the world title, not for Ferrari, but for Raikkonen to have a shot at victory.

The opening lap action was intense with Lance Stroll ploughing into the side of Fernando Alonso, bringing the McLaren driver’s race to a very quick end. The Williams driver was given a drive-through penalty and spent the rest of the race in last place. Leclerc was jostling with a Force India for position with Romain Grosjean right on their tail looking for an opening before the Haas, heavy on a fuel load, locked up and collided with the Sauber and sent it into a spin. The Frenchman retired the next lap while Leclerc eventually brought the car into the garage after 31 laps. Sebastian had to find a way past the Red Bull of Daniel which should have been easy considering that the Ferrari clearly had more pace. But as has been his way this season, he rushed it and banged wheels with Ricciardo who did not put a tyre wrong while defending his position. As usual, it was Seb who came out worse of it, spinning immediately and losing significant track positions which he would recover easily but it would put him out of contention for certain.

A few laps later Daniel Ricciardo’s car just switched off after Turn 11 and shuddered to a halt, giving the Aussie his 7th DNF of the season in a disappointingly familiar fashion. His teammate, on the other hand, had already made his way up from P18 to P5 when Daniel retired while running in P4 on Lap 9. The retirement brought on the Virtual Safety Car as the car was removed from the track and it was during this period that Hamilton went pitted at the end of Lap 11 to switch from the SuperSoft to the Soft tyres while Raikkonen stayed out on his UltraSoft tyres. The Mercedes returned to track in P3 and then set about catching the Ferrari and that was not as easy as it has it has been at some races earlier in the season. Kimi did a fantastic job of making the most of his pace advantage and defending P1 on his older tyres and after a fantastic battle finally had to pit at the end of Lap 21.

Verstappen had started on the Soft compound tyres and pitted on Lap 22 to SuperSoft tyres while Bottas pitted the following lap to the opposite. These stops allowed Vettel to temporarily move up to P3 before waking way for Kimi and then being passed by Verstappen before pitting on Lap 26 for the Soft tyres. Hamilton had led the race since Raikkonen pitted but Mercedes were on a two-stop strategy and then brought in the Brit for a fresh set of Soft tyres on Lap 38. In hindsight, this decision came a couple of laps too late as by the time Lewis rejoined the track, he had a lot of time to catch up on and not a lot of laps to do so. He rejoined the track in P4 and was let through by Bottas once again as he charged to catch up Verstappen and Raikkonen. While the tyres were fresh, Lewis was able to set some incredible lap times and with around 12 laps left, the top three were within two seconds of each other with Kimi holding onto the lead. These last 12 laps were the most intense laps in recent F1, particularly for Kimi fans (myself included). I refused to move an inch from where I sat and I could feel my heart pounding in my chest, lap after lap, faster every time the gap dropped below 1 second or whenever they had to make their way past the backmarkers.

On Lap 54, Hamilton had reeled in the Red Bull of Verstappen and in the last set of corners, the two had a splendid battle. The youngster drove cleanly and defended superbly as Hamilton lost out on the outside line which allowed have Raikkonen some breathing room. The Finn crossed the finish line in his Ferrari to take the race victory, his first win since Australia 2013 and his first for the prancing horse since 2009. I can share with you that I’ve not experienced an F1 race as exciting or as satisfying in a long time and I did not hold back on the emotions. It’s been a highlight of my year so far to see Kimi Raikkonen in his Ferrari racing suit take the top step of the podium, with his cool sunglasses on and going straight for the champagne before wasting it in celebratory sprays. Salut.

Kimi’s win did take away some of the attention from Max’s phenomenal drive to start 18th on the grid and finish P2 after racing for the win in the closing laps. Not many drivers can do that with a car that isn’t one of the fastest four of the current lineup. The more this Dutch racer matures in his racing, the more exciting he is to watch and that’s something I’m really looking forward to in the next two F1 seasons. 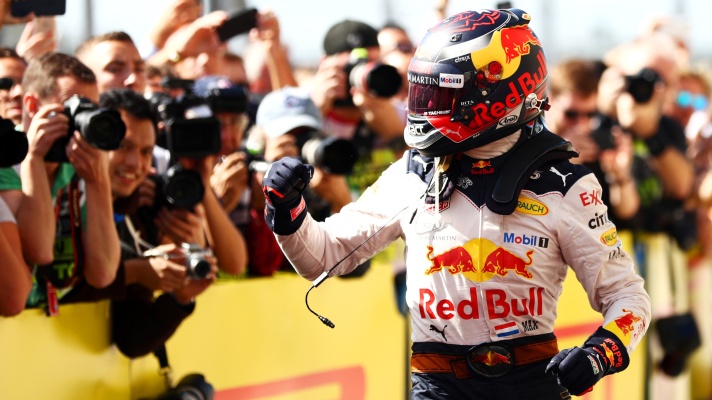 The racing up front almost unfairly stole the limelight from the rest of the grid where there was more exciting racing going on but wasn’t captured in the TV broadcast. Vettel finished P4, finally getting past Bottas on Lap 55 and the other Merc driver had to make do with a P5 result. It was a big result for Renault at Austin that weekend as they secured the most points they could hope for as a middle-order team when Hulkenberg finished P6 and Carlos Sainz finished P7 after starting 11th on the grid. Racing Point Force India thought they too had secured a double-points finish as Ocon crossed the line P8 with Perez in P10. However, Esteban was disqualified as the post-race check revealed that he had exceeded the fuel flow limits on Lap 1. Haas was looking to do well on home turf but walked away with no points after Grosjean crashed in the opening lap and Kevin Magnussen crossed the line in P9 before being disqualified as his car had consumed more than 105kg of fuel during the race. In the end, Sergio Perez got a P8 result and valuable points for the team. 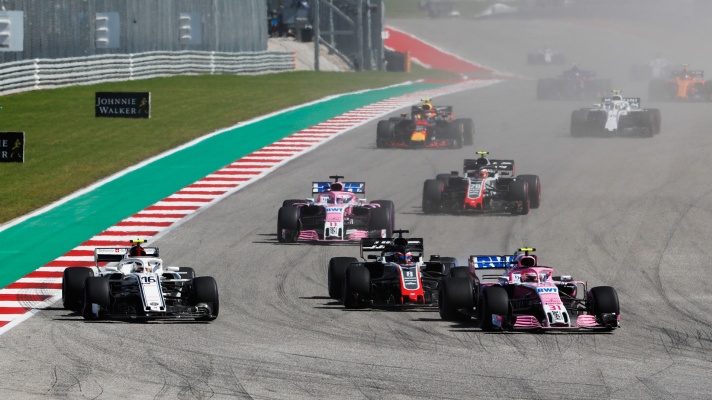 The DQs meant just about everyone who crossed the line, went up two positions in the final classifications. The biggest winners of this were Brendon Hartley and Marcus Ericcson who then qualified as finishers in P9 and P10 respectively, earning some unexpected points for their respective teams. Hartley had started in last place due to the grid penalties incurred from all the new parts his Toro Rosso was using which makes it an even more impressive result. Teammate Pierre Gasly had also incurred grid penalties, started 19th and secured a P12 result. Ericsson had started 16th on the grid after his teammate Leclerc was taken out in the opening lap, Sauber probably didn’t have much of a chance of getting any points this weekend, yet they did get one.

Stoffel Vandoorne just missed out with a P11 classification after having started in P17. It was a typical weekend for Williams though as Sergey Sirtokin and Lance Stroll were 17th and 18th fastest in qualifying, started 14th and 15th on the grid and secured a P13 and P14 result. 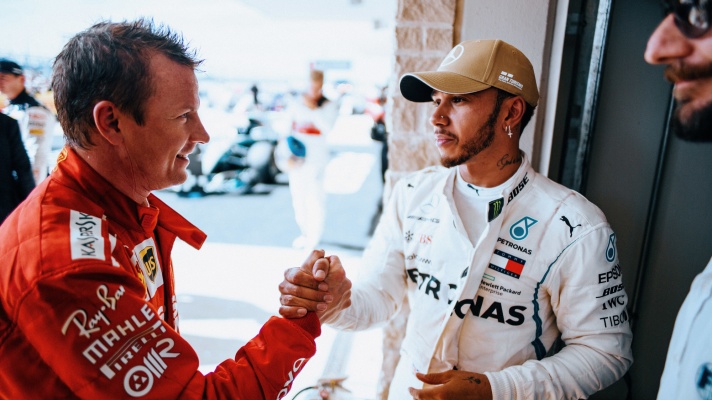 Raikkonen’s win delayed Hamilton’s claim to the 2018 F1 World Champion title, especially with Vettel finishing fourth. As the racing action heads to Mexico just next weekend, Hamilton needs to finish P7 or better to win his sixth world title, irrespective of where Vettel may finish in the race.

Not to sound like a broken record, but this is racing and it’s better to not rush into predictions, even in Formula One. But the more exciting questions for us are – can Kimi do it again? Will Daniel’s car last long enough to take him to the podium one more time? Or will Max take the surprise win?  Stay tuned and subscribe to the Auto Loons for the latest updates on the freshest content.