After the surprising results at Monza, the Singapore Grand Prix was supposed to be a must-win race for Sebastian Vettel and Ferrari to have any hope of catching Lewis Hamilton and Mercedes in the 2018 F1 Championship. The iconic nighttimeMarina Bay city circuit has been a strong track for Ferrari and they were the favourites going in, just like they were in Monza, and then they were outgunned, just like what happened in Monza.

In practice, Ferrari clearly had the quicker car but things were quite different when it came to qualifying. Indeed, Hamilton drove one of the most fascinating qualifying laps of his F1 career to take pole position (video below) but then the second spot on the front grid was taken by Max Verstappen in the Red Bull. Vettel was more than half a second off-pace and qualified third fastest alongside Valtteri Bottas who had qualified fourth fastest. Kimi Raikkonen was fifth fastest and shared the third row with Daniel Ricciardo starting sixth on the grid.

It was an exciting start from Vettel to get past Verstappen in the first few corners while Hamilton held the lead just before the Safety Car was brought out for Esteban Ocon’s wreck on the opening lap. At the restart, Hamilton just pulled away from Vettel and was pretty much unchallenged for the rest of the race. All six of the front runners were racing on the Hypersoft compound this weekend but Ferrari went for the undercut and pitted Vettel on Lap 14 to switch him to the UltraSoft compound. In hindsight, that was a bit too early and the wrong set of tyres as the UltraSoft could have meant a two-stop race whereas using the Soft compound would have easily lasted Vettel till the end of the race. Another instance that suggests Ferrari isn’t doing enough testing on the Pirelli Soft compound tyres this season. As it happened, Seb didn’t have the pace he needed on the new UltraSofts and Lewis was able to do an incredible in-lap to pit and come out still ahead of his championship rival. Things got really bad for Ferrari though when Red Bull Racing pitted Max Verstappen on Lap 17, put him on the Soft tyres and got him out ahead of Vettel to basically end up in P2.

From thereon, it was a snoozefest, except for one moment when the leaders were caught up in the battle of the backmarkers and Max got interestingly close to Lewis, but the pace of the Silver Arrow put that to rest once they got into clear space again. Hamilton took a comfortable win in Singapore after a fantastic drive while Verstappen settled for a P2 finish and Vettel couldn’t manage better than third place on his worn out UltraSoft tyres. Kimi, whom Ferrari had confirmed would be switching places with Charles Leclerc next year had a simpler race and finished P5 behind fellow Finn Valtteri Bottas who finished fourth. Daniel Ricciardo seemed to have the superior pace at times when he closed the gap to Raikkonen but the Aussie finished how he started, in P6. So, the top six finished in the same order they started and Lewis has extended his driver’s championship lead over Sebastian to 40 points with just six races left in the 2018 F1 season. While it is still statistically possible for Vettel and Ferrari to make a comeback, the Championship in all likelihood seems to have been decided with Lewis retaining his crown. But don’t expect the Brit to be any slower in the rest of the races, especially as the action heads to Sochi in Russia next, a track where Mercedes have dominated since the beginning. 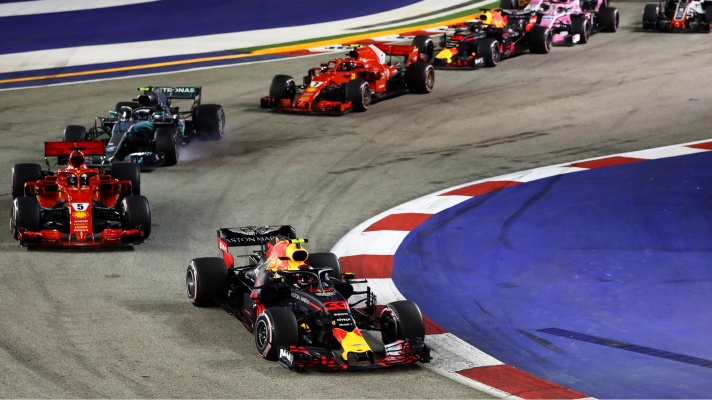 It was yet another strong performance from McLaren and Fernando Alonso at Singapore as the Spaniard crossed the line in P7 to finish best of the rest. An impressive result around the tight circuit that nullifies most power advantages given that Alonso had started the race from P11 on the grid. His teammate Stoffel Vandroone qualified 18th fastest and finished P12, the youngster who won’t be racing next season being outperformed by his teammate who will be retiring from F1 at the end of the current season. Renault had another strong double-points finish as Carlos Sainz and Nico Hulkenberg crossed the finish line in P8 and P10 respectively. Sainz got the better deal out of his tyre strategy given that he had started from 12th on the grid on a set of UltraSoft tyres while Hulkenberg had started from P10 on the Hypersoft tyres.

Things are looking interesting over at Sauber what with Raikkonen returning to the team next year and their current star Charles Leclerc seizing yet another points scoring finish this season as he crossed the chequered flag in P9 after he had started P13 on the grid. It has been confirmed that Leclerc will indeed be racing for Ferrari in 2019 alongside Vettel and the youngster clearly proved yet again why he is a deserving driver for that prestigious seat in the red F1 car. His teammate Marcus Ericcson seemed to have recovered from his scary Monza incident and had qualified 14th on the grid and was running in P11 as he crossed the finish line. The audience was even treated to a slice of what’s to come when Charles Leclerc and Pierre Gasly battled for position, both of whom will be racing for the top teams in 2019. 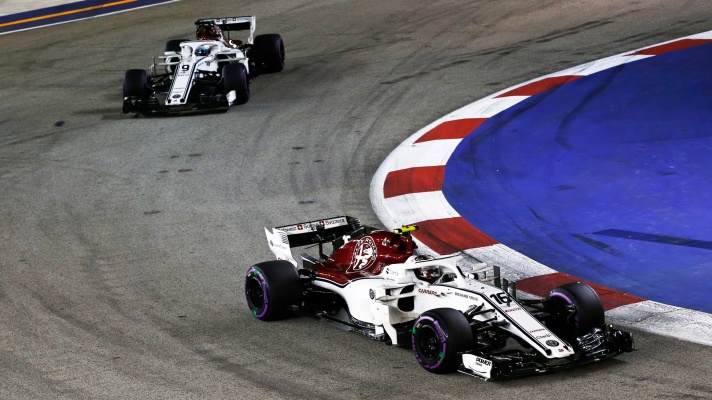 The biggest losers of the 2018 F1 Singapore Grand Prix were Racing Point Force India but it was their man Sergio Perez who provided half the excitement of the race. Both cars started in the top 10 with Perez starting 7th on the grid and Ocon qualifying ninth fastest. On the first lap at Turn 3, Perez closed the door on Ocon who was trying to go around the outside which ended with Ocon in the wall and out of the race. While the Mexican wasn’t penalised for his Lap 1 incident, it was clearly an intentional move and his excuse of not having seen a car that was completely alongside him put him on shaky grounds. Now the only car on track for the team, it was on Checo to bring home some points but instead, he got caught up with the Williams of Sergey Sirotkin. After his pitstop, Perez had to make his way back up the order and Sirotkin was on the Soft compound tyres due to an early pit after the Ocon incident so the Russian had gained positions by not having to pit.

Sirotkin had had an underwhelming debut in F1 partly due to the lack of performance from the Williams he was piloting this year. But the rookie was keen to show his potential and for many a lap, did a fantastic job of defending his position from the experienced Perez. We got plenty of whining radio messages from the Force India driver before he finally got close enough to get alongside Sirotkin on Lap 34 but the Williams driver wasn’t having it. They were going wheel-to-wheel for a couple of corners until for no sane reason, Perez just turned into Sirtokin. Luckily Sirotkin didn’t take too much damage from the collision apart from more wear on his tyres, whereas Sergio suffered a puncture and had to come into the pits. On another set of fresh tyres and completely out of the points, Perez did happen to cross paths with Sergey but on the fresher tyres, he was able to pass him easily for a disappointing P16 finish.

Sirotkin, the man of the race, had more fight in him after the Perez incident and he was then defending his position from Romain Grosjean. This was the epic battle that got in the way of race leaders lapping them and earned the Haas driver penalty points on his license for not responding to the blue flags in time. Sergey had one last incident with Brendon Hartley when he forced him wide because his own tyres had no grip left and came into the pits on Lap 45 and crossed the line in P19. A poor result but a memorable performance from the Russian driver. The other Williams car with Lance Stroll behind the wheel had a less eventful night after starting 20th on the grid and finishing in P14.

Haas had another disappointing race with Kevin Magnussen starting 16th on the grid and finishing in P18 while Grosjean managed to qualify 8th fastest but finished the race in P15. Magnussen suffered multiple punctures and that contributed to his poor performance but he did manage to set the fastest lap of the race. Toro Rosso Honda was also unable to get any points with their team around the Marina Bay Circuit with Pierre Gasly qualifying 15th fastest and finishing P13 while teammate Brendon Hartley qualified and finished the race in P17. 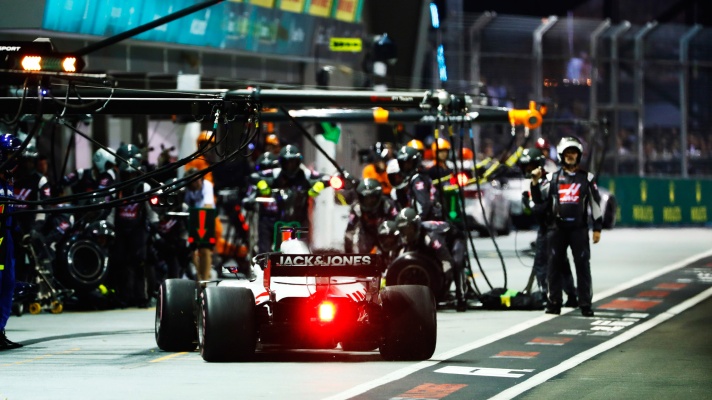 The action moves to Sochi, Russia in two weeks time where we are looking forward to another strong drive from Sergey Sirotkin and maybe even some points. At the top of the leaderboard, it will take everything Vettel has to put a dent in Hamilton’s lead in their chase for this year’s driver’s championship. A forty point gap may seem too big to close but this is motorsport and anything can happen. Stay tuned and subscribe to the Auto Loons for the latest updates on the freshest content.