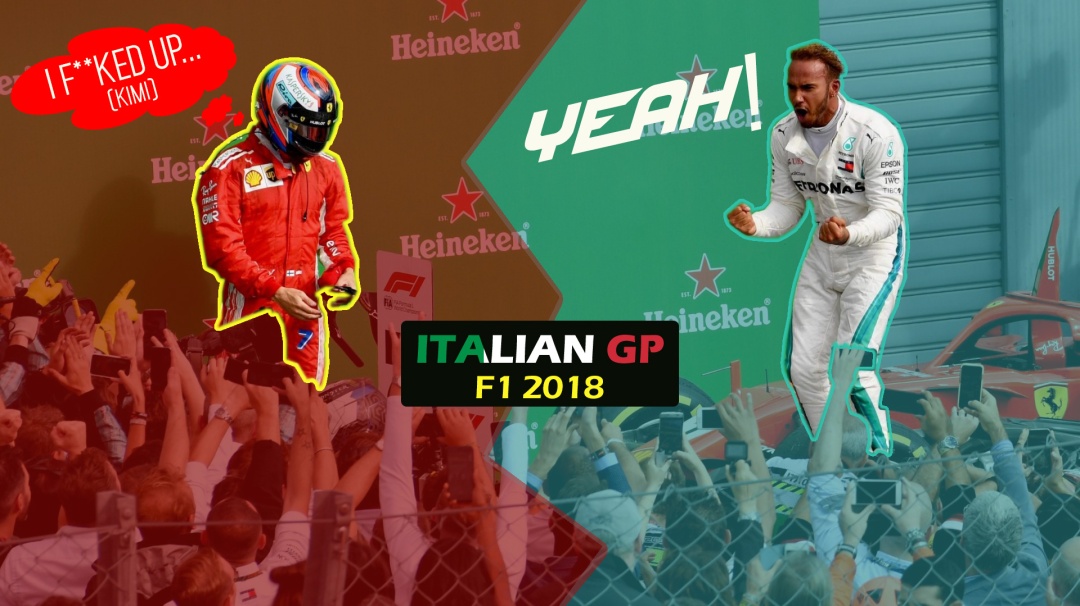 It’s good to have back to back races after the summer break as we headed to the final race of the European leg of 2018 Formula One. The Italian GP at Monza, the home of Scuderia Ferrari and the third oldest racetrack still in use. After the increased pace shown by Ferrari at Spa-Francorchamps, they were the favourites to win, something the reds haven’t managed since 2010.

In practice, even with the rain, both Sebastian Vettel and Kimi Raikkonen were clearly showing a faster pace than Mercedes. A high-speed crash at the start of FP2 was a good reminder about just how dangerous this 11-corner circuit can be. The Alfa Romeo Sauber driven by Marcus Ericcson had a DRS failure down the start-finish straight which suddenly turned the car into the barriers at top speed. Fortunately, Ericcson walked away unhurt after the many spins and rolls that left his car a battered mess next to the tarmac.

Qualifying was a positively less dramatic affair as Lewis Hamilton was pushing his silver arrow to the limit to try and stay ahead of Vettel while Bottas was also struggling to stay in the top four. In Q3, it was a tight battle for pole position as in the first run, Kimi gave a tow to Seb and Lewis was able to get the added benefit from slipstreaming them both so he was quicker. But in the final run, the Brit was ahead, followed by Seb with Kimi behind them both which allowed the Finn to secure his first pole position since Monaco last year and also set the new record for the fastest F1 lap ever. Raikkonen beat the long-standing record set by Juan Pablo Montoya when he achieved an average speed of 262.24kph to complete the lap in 1m19.119s. Seb would start second on the grid giving Ferrari a front-row lockout at their home circuit and the tifosi a lot to cheer about. Hamilton and Bottas qualified 3rd and 4th fastest respectively and the Mercedes garage knew they had their work cut out for them on race day. Both Red Bulls were outpaced with Verstappen qualifying 5th fastest and Ricciardo starting 19th due to grid penalties for new power unit elements.

Monza’s first chicane after the long start-finish straight is often a case for making drivers cautious to avoid a first turn collision. Unfortunately, Brendon Hartley got caught between a Sauber and a Renault and his race was brought to an immediate end with his Toro Rosso on the right side of the tarmac. At the front though, Raikkonen did a great job of defending his position as Vettel tried to go around the outside which allowed Hamilton to put the pressure on the German as they headed around Turn 3 and into the next chicane. Kimi defended well again but Lewis was able to get around the outside of Vettel to be on the inside for the exit of the chicane. Vettel tried to shut the door on Lewis but in the collision, he came out much worse as his car got spun around and his car suffered damage too. Verstappen had gotten ahead of Bottas in the first chicane while Ricciardo still had a lot to do.

It was after these action-packed corners, the Safety Car was deployed as Hartley’s car was collected and the debris was cleared from the track. Raikkonen was able to get a good restart as Vettel was at the back of the order with a new front wing and a fresh set of Soft compound tyres. Hamilton overtook Raikkonen down the straight at the restart but the Finn made a fantastic move to reclaim the top spot in the next chicane and was pushing hard to pull away. All the front-runners were using the SuperSoft compound which had lasted more laps thanks to the early SC period with the pit stops expected to begin around Lap 22-25. But for some reason, Ferrari pitted Kimi to switch to a set of Soft compound tyres on just Lap 20. This brought him back on track in P4 and Lewis still had pace on his tyres making the most of the clean air ahead of him. As Verstappen came into the pits on Lap 26, Bottas stayed out and took the lead when Hamilton finally pitted on Lap 28 with Kimi right behind his fellow Finn.

The next six or seven laps were a great display of teamwork from Mercedes and defensive driving from Bottas to keep Raikkonen in dirty air and allow Lewis to catch them up on his fresh tyres. It was plain to see that Kimi was having to push his tyres much harder than he would have liked to in that stint but clearly Ferrari didn’t have an alternate strategy for him. After what almost looked like bullying, Mercedes finally bought Bottas into the pits on Lap 36 and Kimi with his already blistering rear-left tyre had Hamilton barely a second behind. For the next few laps, Kimi drove as best as he could to stay ahead of Lewis who was closing in by staying just within DRS range, lap after lap, until there was nothing left to work with on those Soft compound tyres. Raikkonen defended the inside line heading into the first chicane but couldn’t brake too late which allowed Hamilton to pass him around the outside and that was it. A brave and exciting battle for the lead that ended too soon with boos from the tifosi as Hamilton shot off to victory. 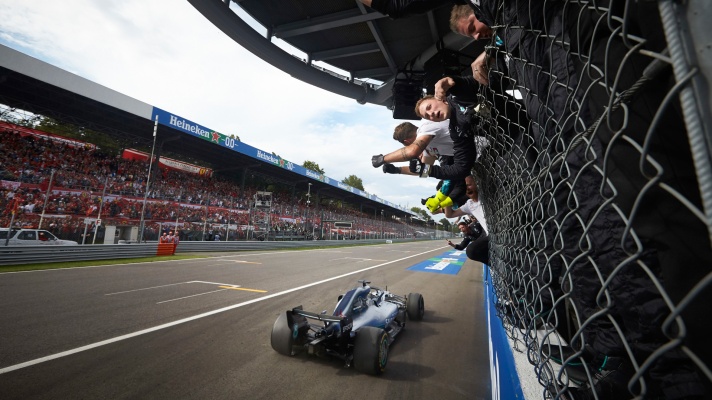 Vettel had pitted around Lap 29 to switch to SuperSofts for his last stint which meant he had to make his way back up from P11 all over again. In the final ten laps or so, Verstappen was trying his best to defend his third position from Bottas. Bottas had tried to get the job done in the first chicane but couldn’t make the move stick as Vettel had the pedal to the metal catching them up. Verstappen then blocked Bottas on the outside during breaking, forcing him to go through the pass-by lane and was handed a 5-second penalty as a result. Max was adamant that he had done nothing wrong and was simply doing his job – racing.

This did allow Bottas the chance to keep the pressure on the Dutchman without having to take a big risk to get past him while their battle allowed Vettel to close the gap down to less than 5 seconds from Verstappen. Max may have crossed the line in P3 but the penalty meant he classified with a P5 finish as Bottas took the final podium spot and Vettel classified P4 in the final standings. Daniel Ricciardo had a short race after he had to retire his smoking Aston Martin Red Bull Racing machine on Lap 23 due to a problem with the clutch. 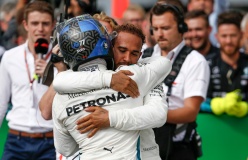 It was Ferrari’s chance to get ahead of Mercedes in the Constructor’s championship with the fastest car around their home track. But a strategic mistake for Kimi and an error from Vettel has left them 25 points behind. Meanwhile, Lewis has been able to extend his lead over Vettel to 33 points with 7 races to go. Most disappointing for Raikkonen though who hasn’t won a race since 2013 with Lotus. It might be too early to say this still, but given the Brit’s consistently strong performance backed up by Mercedes’ ability to perform well on race day suggests that this will be Hamilton’s fifth title. Only a matter of time now, but Vettel’s own mistakes may have put him too far behind in the points. 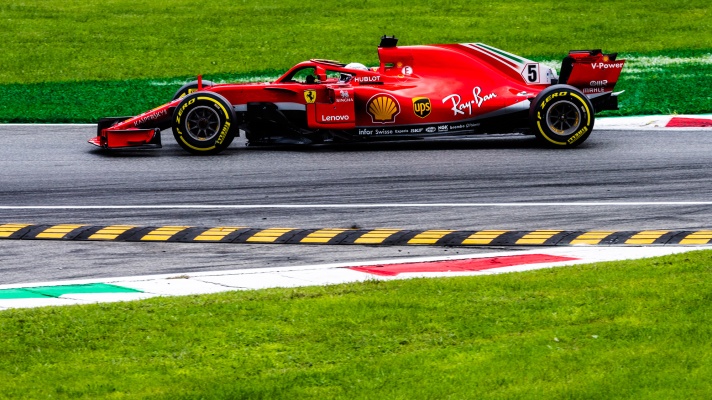 It was a fantastic finish for Romain Grosjean in the Haas who had started and crossed the line in P6. Unfortunately, after a post-race scrutiny by the stewards, a component on the floor of his car was found to not be up to code and hence he was disqualified. Haas was in communication with the FIA since July regarding the part which has been listed as a breach of regulations and intends to appeal the decision and have the race result reinstated. But as of now, the team and Romain walk away from Italy with no points despite a great performance. Kevin Magnussen meanwhile started 11th on the grid and had to make an early stop on Lap 4. He was the last to cross the chequered flag. Team Renault was in for a tough weekend as Nico Hulkenberg was given a 10-place grid penalty for his crash at Spa-Francorchamps and was starting last. He managed to finish with a P13 result despite an early stop after being part of the Hartley-sandwich at the start. His teammate Carlos Sainz did get some points though, qualifying 7th fastest and finishing P8 in the final standings.

Racing Point Force India continues their superb form from Belgium as the newly financed team appears to have finally gotten the parts needed to bring their performance to the level expected of them. Esteban Ocon outdid his teammate Sergio Perez yet again after qualifying 8th fastest and registering a P6 finish. Perez had a poor run in qualifying, starting 14th on the grid and finishing P7 in the final standings. In a surprise result, Williams Racing managed to get a double-points finish after Grosjean’s disqualification. Lance Stroll started 10th on the grid while Sirotkin started 12th and they secured a P9 and P10 result respectively. Toro Rosso Honda looked like they could have a strong result with Pierre Gasly at Monza this weekend. The future Red Bull driver had a strong battle for track position with the man he’ll be replacing, but despite starting 9th on the grid, Pierre stood P14 in the final standings of the Italian GP. 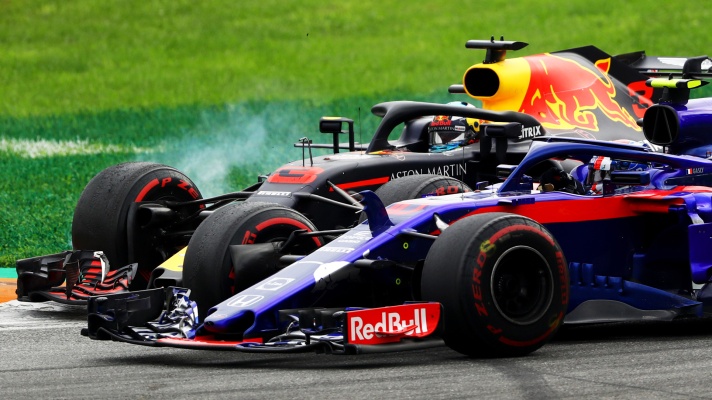 Sauber was also hoping for a strong result at what is home for them too but Marcus Ericcson’s brave return after the horrifying crash could only get him a P15 result due to his early stop after colliding with Hartley at the start. Teammate Charles Leclerc started 15th on the grid and stood P11 in the final standings, an unexpectedly uneventful performance from the talented rookie. McLaren’s streak of poor performance continues as Fernando Alonso started 13th on the grid and retired after 9 laps while Stoffel Vandoorne started 17th on the grid and registered a P12 finish.

Formula One heads to Singapore for the famous nighttime street race in two weeks time but without some sort of nightmare result for Hamilton, there’s not much left in this championship. The Auto Loons will always cover every race as usual so stay tuned and don’t forget to subscribe to get the latest updates on the freshest content.