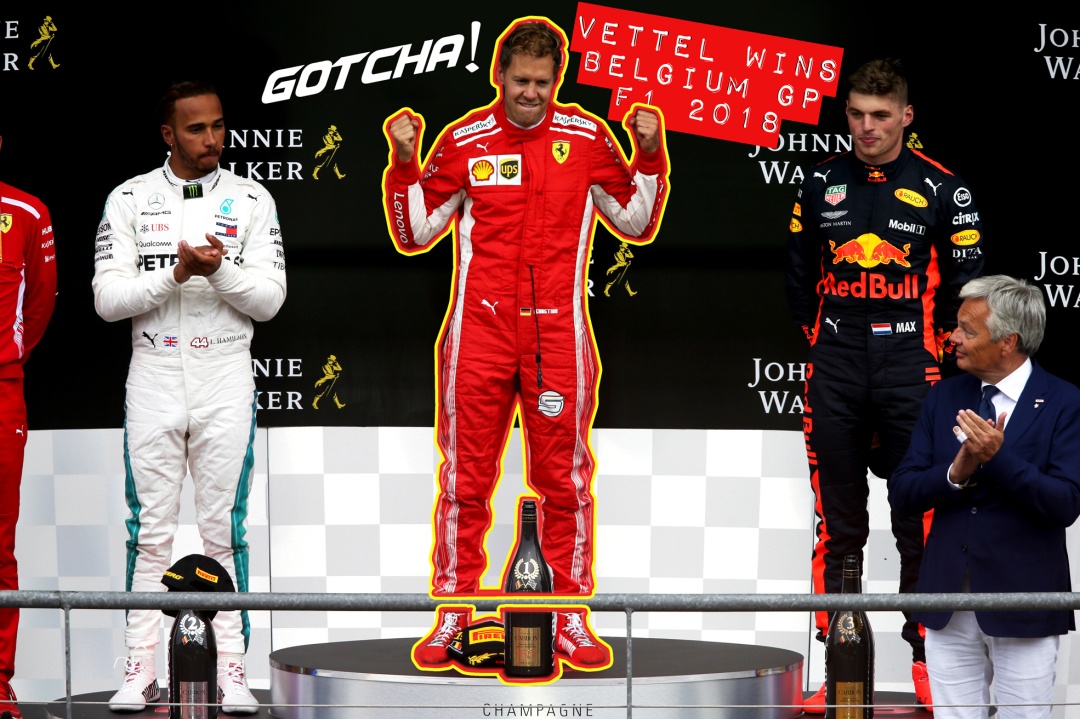 Vettel flies past Hamilton after a dramatic start at Belgian GP: F1 2018

After all the off-track drama during the Formula One summer break, it’s FINALLY time to get back to racing and the Spa-Francorchamps circuit was the venue for the weekend.

Ferrari had the quicker car and made that pretty clear after topping the time charts in all the practice sessions. In qualifying, Mercedes set better times in Q1 and then both Ferrari drivers were faster in Q2 which made it seem that the reds would get a front-row lockout with Sebastian Vettel securing pole position. However, in Q3 the clouds weighed in and the sudden wet conditions around the track really played havoc with strategies and lap times. As is the case with wet weather on a race track, the first to respond to the changing conditions often gets the best results and that’s what happened.

Lewis Hamilton was able to take pole position in the closing minutes as various parts of the track began to dry up while Vettel qualified second fastest. Kimi Raikkonen was pitted and for whatever reason not let out on track for a final fast lap which left him with the sixth fastest time on the board. Meanwhile, Valtteri Bottas had a spin in the early stages of the wet track conditions and was ultimately unable to set a time. But the Finn also incurred penalties due to multiple replacement power units meant he started 17th on the grid. This allowed the newly renamed Racing Point Force India drivers – Esteban Ocon and Sergio Perez for their best qualifying results in recent years as they qualified third and fourth fastest respectively. Red Bull Racing too was caught out by the rain which meant Max Verstappen and Daniel Ricciardo were starting seventh and eighth respectively. 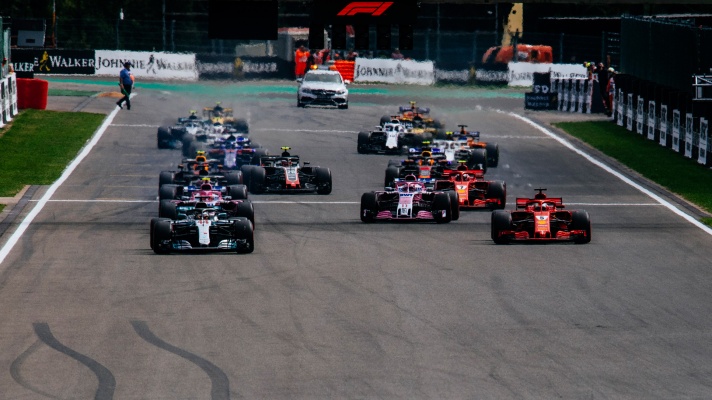 It seemed like the perfect setup to finally have a direct battle between Vettel and Hamilton for the race win with the two drivers starting up front with their teammates out of the picture for the first few laps. But one big crash and one stunning overtake seemed to set the mood for most of the 44 laps in the Belgian GP. As soon as the lights were out Hulkenberg was off to a flying start eager to make up the places lost to grid penalties (started 18th) and was going around the outside of the extremely tight first corner. Unfortunately, he braked too little too late and shunted straight into the back of Fernando Alonso’s McLaren which got sent into the back of Charles Leclerc in the Sauber. Alonso actually caught air as his car was shoved into the Sauber in front, going sideways and crashing down onto the halo that protected Leclerc from what could have been a much more serious incident. You can watch the replay here from just about every angle below:

As the chaos occurred at the back of the grid in Turn 1, Vettel had Hamilton right where he wanted him and this year his Ferrari had the pace to stay close to the Merc. The two made their way past Eau Rouge up to Radillion and down the straight, Vettel slipstreamed his way past Hamilton to take first place just before the Safety Car was deployed. It was an exciting overtaking manoeuvre and one that had Lewis staring at the Ferrari in parc ferme befuddled as to how his Silver Arrow had been outpaced. It wasn’t plain sailings all the way for Seb however.

While the debris was being cleared around Turn 1, the cars were driving through the pit lane and Vettel was able to pull off a good race restart once the Safety Car had pitted. He then had to fend off the Brit for the remainder of the first stint until Lewis pitted first to switch to the Soft compound tyres around Lap 22 and Vettel did the same on the next lap. His lead margin on Lewis’ outlap had been enough to bring him back out on track just ahead and still in first place. While Lewis kept Seb within reach for the first few laps on the fresher tyres, he came to the conclusion that unless the German messed up, the Ferrari would be uncatchable. For the last 15 laps of the race, he backed off and settled for a P2 result which brings his driver’s championship lead down from 24 points to 17 points. This was Ferrari’s first win at Spa since 2009 and should act as a big morale boost for Seb and the whole team as well.

Kimi had an early retirement at this year’s Belgian GP after he first suffered a puncture in the Turn 1 squeeze at the start of the race. The SC did aid the Finn to have a fighting chance after his early stop for fresh rubber but whatever damage the car had suffered was too much and he had to end his race after just 8 laps. Daniel Ricciardo too got scathed in the chaotic start of the race and had a damaged rear wing which the Red Bull boys tried their best to fix and get the car back into the race. Alas, Daniel was at the back of the order and stayed there till Lap 31 before retiring from the race as well.

Teammate Max, however, was able to capitalize on the situation with no other podium contenders in the race. He knew he didn’t have a shot at victory in the slower Red Bull, even letting Lewis on fresher tyres go by without much resistance. Instead, the youngster drove a sombre and calm race to finish third and claim his third podium of the season and secured valuable points for the team. Bottas meanwhile put forward an impressive performance, having started in P17 and then had to pit to fix his front wing after damage from the Turn 1 chaos to make his way up the order. His Mercedes may be the faster car than any middle-order competitor but the Finn pulled off some impressive overtakes including passing a Toro Rosso on the outside of Radillon. He finally crossed the finish line in P4 to contribute to Mercedes constructor’s title bid.

The biggest winners of the race could well be the Racing Point Force India F1 team who had been through a rough summer administratively speaking. Having been stripped of all their points this season after gaining new owners and a new name, Perez and Ocon started on the second row and finished the Belgium GP in P5 and P6 respectively. At the start of the race though, just as Vettel passed Hamilton, Ocon was down the inside of the Ferrari and almost took the lead but had to back out when it got too close to the latest breaking point for the next corner. This performance earned the team a total of 14 points and puts them ahead of Williams’ tally in the season so far. Haas would be disappointed as the crashes had created an opportunity for them to secure enough points to get ahead of direct rivals Renault. However, they did close up the gap after Romain Grosjean started fifth and finished P7 while Kevin Magnussen started ninth and finished P8. Renault’s remaining driver Carlos Sainz couldn’t get beyond Q1 in qualifying and was running in P11 when he crossed the finish line.

Bottas’ penalties allowed future Red Bull driver Pierre Gasly to start in his Toro Rosso Honda from 10th on the grid. He even managed to secure a few more points after he crossed the line in P9 ahead of Marcus Ericsson. Ericsson who had a decent battle for position with other Toro Rosso Honda driver Brendon Hartley is eager to show that he deserves to race in Formula One. 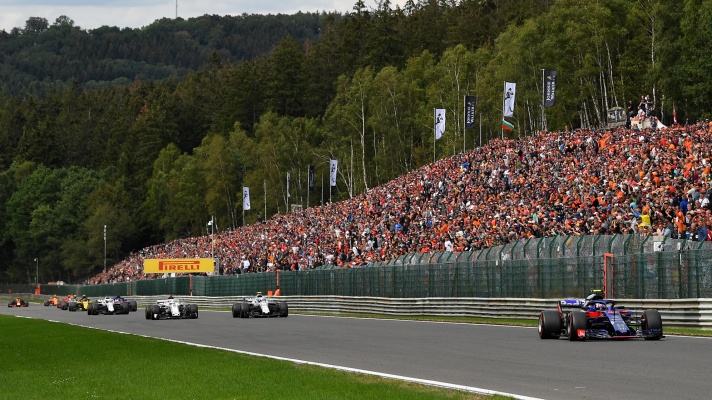 Mercedes have a lot to do to catch up with Ferrari’s new found pace as they head to Monza for the Italian GP. Does Vettel finally have the car to outpace Hamilton? Will he be able to close the gap in the 2018 driver’s championship in the next couple of races? Who will be replacing Pierre at the Toro Rosso Honda team next year? Stay tuned for all of that, share your thoughts in the comments below and subscribe to the blog for plenty more to come.