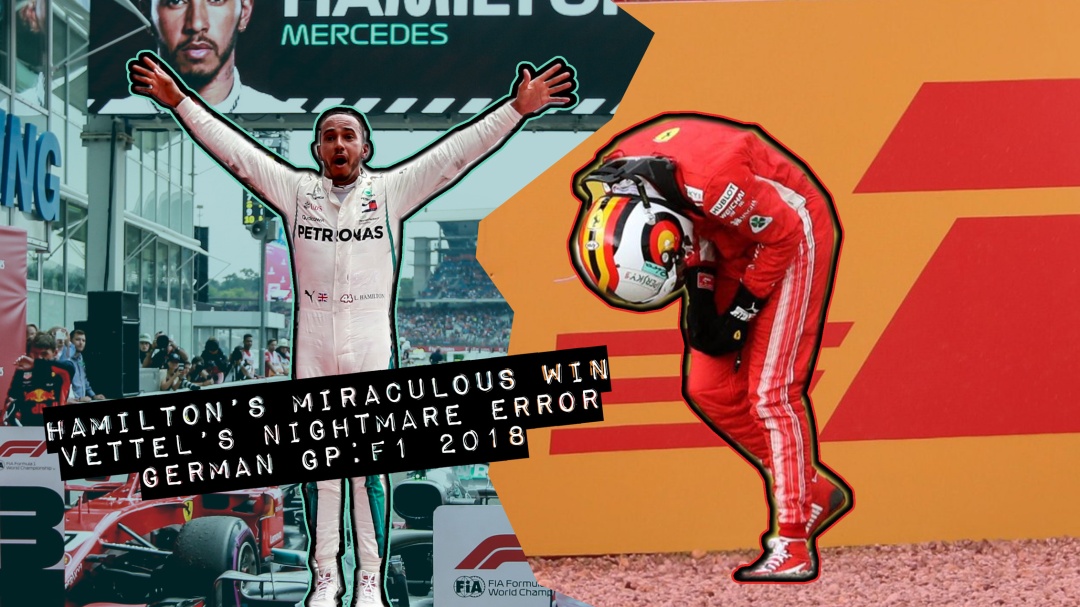 A week’s gap after the triple header which included the fantastically entertaining race at Silverstone, the Formula One action returned to the Hockenhieimring Circuit of Germany. A power-track that features every alternate year on the F1 calendar since 2006, one that should favour the faster Mercedes Silver Arrows. But in 2018, the nearly-as-fast Ferrari would take them head on especially with their main-man Sebastian Vettel at the wheel.

The Red Bulls looked particularly impressive with the quickest times in Friday’s practice sessions but Daniel Ricciardo was utilising plenty of new engine parts this weekend and was expecting to start at the back of the grid due to penalties. However, in qualifying, things went perfectly for Vettel and disastrously for Lewis Hamilton as the Brit’s car suffered hydraulic damage and was unable to participate in Q2, thus resigning the defending champion to start 14th on the grid. Vettel managed to take pole with a blistering time that was two-tenths faster than the second quickest driver in Q3, Valtteri Bottas. Kimi Raikkonen had yet another erroneous final run in Q3 that put him on the third spot of the grid for the third consecutive race. Max Verstappen was fourth fastest in Q3 and was the only Red Bull driver this weekend with a serious chance at a podium finish. Vettel was particularly ecstatic with getting pole position as he had always struggled on this track, had never gotten pole here nor a win, despite being a local from a town just 20 miles or so from the circuit.

Vettel got off to a great start and was already pulling away within a few laps with Bottas, Raikkonen and Verstappen in tow. Ricciardo and Hamilton were working their way up the middle order but the Mercedes with the pace advantage had an easier time of it. By Lap 14 of 67, Lewis was already fifth in the order working on the more difficult task of catching  the leaders while Daniel was still out of the points. Raikkonen running on UltraSofts pitted surprisingly early on Lap 15 to switch to the Soft compound tyres and came out ahead of Hamilton. Clearly, the Ferrari team had both drivers running on different strategies particularly with rain predicted for the second half of the race. Things were quiet in the front for about ten laps or so till Vettel pitted on Lap 24 to switch from UltraSofts to Softs and he too rejoined the race ahead of Hamilton but behind Raikkonen. This allowed Bottas to take the lead with Verstappen comfortably behind in P2 also looking to pit soon. A few laps later Mercedes pitted Valtteri while Hamilton stayed out on track and was then ahead of his teammate, by this point Verstappen had pitted as well. For Daniel Ricciardo, the race came to an end on Lap 28 as he suffered an engine failure and had to retire the car. A disappointing weekend for the Aussie racer with reliability concerns for the Hungarian GP next week.

Kimi was leading the race with Vettel a second behind and eventually, the call came in asking the Finn to ease off the pedal and let his teammate through. It was an interesting radio-conversation clip to add to Kimi’s best hits over his F1 career. All that while though, Hamilton was catching up rapidly even though his Soft tyres had put in an impressive stint of over 30 laps. The rain was imminent but it was uncertain which parts of the track it would affect and the intensity of the shower. On Lap 43, Lewis pitted to switch to UltraSoft tyres and on Lap 44 the rain came but only on the area around Turn 6 while the rest of the track was still dry and hot. This kind of rain made for interesting circumstances and thew most team strategies out of the window. Vettel was still comfortably in the lead ahead of Raikkonen, Bottas and Verstappen while Hamilton was in fifth pushing ahead. Max switched to Intermediates like a few other cars on track but it turned out to be a mistake and had to pit again to switch back to slicks for the rest of the race.

The rain seemed to stop after a few laps but the track was still wet in parts. Ferrari and Vettel seemed to have it in the bag but then disaster struck for the German on Lap 52. Vettel, for whatever reason, made a mistake and slid into the barriers after losing rear-end grip in what seemed like the most undramatic slow-motion end to his otherwise perfect race. Not only did it mean he was not going to get any points this race, the deployment of the safety car put Mercedes in the best possible position. In a scramble, they pitted Bottas to switch to fresh UltraSofts and there was confusion in communicating with Lewis. As a result, he drove his car out of the pit entry lane at the last second, across the grass and stayed out on track to take the lead of the race. Raikkonen pitted too during the safety car period and rejoined with Verstappen behind him in P4. As Kimi and Valtteri were making their way past the backmarkers, a poorly position Haas car ran Kimi wide and allowed the Mercedes driver to go through.

Bottas was quicker than Hamilton in getting his new tyres up to temperature and was battling for the lead till he was given team orders to back off. The Finn fell back and crossed the line in P2 ahead of Kimi in P3 and Verstappen finished P4. But it was the miracle Lewis Hamilton was praying for after his qualifying incident as he took the chequered flag at the German Grand Prix in Hockenheim and was once again at the top of the driver’s standings. The fact that the rain came pouring down as the cars returend to parc ferme proves that luck was a considerable factor in Lewis’ miraclulous win at the 2018 German Grand Prix.

There was plenty of overtaking and sliding action behind the leaders as the middle order teams were fighting hard to get the best result possible. Nico Hulkenberg drove superbly well to capitalise on the chaos and secure a P5 finish in his Renault after starting seventh on the grid. His teammate Carlos Sainz had qualified eighth fastest and crossed the line in P10 but was out of the points due to a 10-second penalty for overtaking under the safety car. It seemed like another promising weekend for Alfa Romeo Sauber’s rising star Charles Leclerc after he qualified ninth fastest, his fourth Q3 result this season. Unfortunately, his gamble to switch to Intermediates when the rain first began did not pay off and he suffered from a rapid ride off-track. But his P15 finish offered a remarkable F1 moment when he executed a perfect 360-degree spin on track during the race.

Artistic end to the week-end 💃 pic.twitter.com/fsGe3Os8zE

Marcus Ericcson had started 13th on the grid but was able to secure valuable points with a P9 finish. Haas had the best starting position, the third row on the grid, after the problems for Hamilton and Ricciardo, but were unable to capitalize after the chaos brought about by the rain. Romain Grosjean started sixth and despite his poor start to the race he was able to cross the finish line in P6 while his teammate Kevin Magnussen started fifth and was unable to finish in the points after securing P11 following Sainz’s time-penalty.

Team Force India, however, was able to make the most of the situation this weekend. Esteban Ocon started 15th on the grid and was able to finish P8 while his teammate Sergio Perez qualified 10th fastest and crossed the line in P7 to get the team a crucial double-points finish. McLaren had a difficult weekend and even Fernando Alonso was not able to shine in the changing conditions finishing P16 while Stoffel Vandoorne finished P13 and neither car made it to Q3. Both Williams cars started at the back and retired in the closing laps of the race. Toro Rosso Honda were able to get an unexpected point after Brendon Hartley secured a P10 finish despite starting 16th on the grid. His teammate Pierre Gasly started 20th due to grid penalties and finished P14.

The British GP was being hailed as the most exciting race of the season but the German GP at the Hockenheimring Circuit just left us biting our nails till the very end even though there was less overtaking at the front. It was Lewis’ best career finish having started that far back on the grid and it was a crucial result for him after his big lows in qualifying and at Silverstone before. There was a scare when the stewards called him in to address the issue of him cutting across the grass to rejoin the track from the pit entry lane but in the end, Lewis was only reprimanded for it.

This victory puts him 17 points clear of Vettel with one race to go before the summer break. It also comes on the outset of him confirming his contract to stay with Mercedes for 2019 and 2020 for an absurd amount that is rumoured to hover close to USD 40 million a year. Kimi still hasn’t addressed the questions of his future at Ferrari while Ricciardo is still to sign a contract for the next season.

We head to Round 12 in Hungary next weekend before the summer break with Mercedes and Hamilton back in form and on top of the standings. Can Ferrari and Vettel give the performance they need to in order to stay in contention? Or will the Red Bull racers turn up to upset both teams? Stay tuned and don’t forget to subscribe to The Auto Loons for plenty more updates to come.