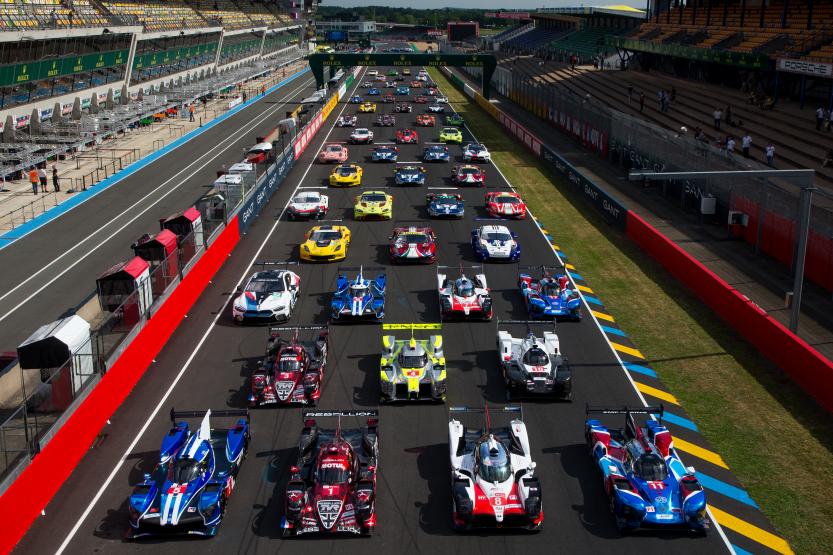 If you’re a fan of any form of top-level motorsport or even of circuit-racing video games you’d have heard of an event called the Le Mans. The 24 hours of Le Mans to be specific. This event is part of the World Endurance Championship and is a time format, wherein the cars try to complete the most number of laps AND finish the race over the course of 24 hours. There are few tracks in the world that have the honour of hosting such a demanding race like the Nürburgring-Nordschleife and Daytona, but none have the history or special-feeling like the 24h Le Mans hosted at Circuit de La Sarthe in rural France.

The world’s best manufacturers participate with the most incredible machines and with some of the best racing drivers in the world at the wheel. A full lap covers nearly 8.5 miles, most of which is the Mulsanne straight wherein cars drive at their peak speeds, and also features some very fast corners and some tight corners at the end of long straights. A challenging proposal indeed. This unique nature of the Le Mans circuit also demands a pre-race session for the teams which is a one-day test session that is separate from the race weekend.

After a 4-hour practice session the Wednesday before the race, a two-hour qualifying session is held at night time as each driver of each team needs to complete five laps in the dark to be eligible for the race. With that out of the way, the teams can really focus on getting the best qualifying lap to start ahead of the grid. An additional two qualifying sessions, two-hours each for the 60-car grid, is held the following day which is also after sunset. The Driver’s Parade through the French rural district around the track on Friday is another way to connect teams and fans before the race.

By the time this goes up, qualifying is already complete so all that’s left is the main race which will start at 3PM (local time) on Saturday. No Indian telecaster has the rights to live telecast the entire race live so keep a lookout on all possible online platforms to tap into the global service providers that would be streaming the event online. If not you can always keep a tab open with livetext updates for track positions to follow the progress.

Even if you happen to look at an ad or highlight reel for Le Mans you will notice that the cars can be quite drastically different with some looking like spaceships and some a lot like their road-legal production versions. That is because there are different categories of both car and driver, racing together at the same time. Here’s the basic classification:

LMP1
That stands for “Le Mans Prototype 1” which is for cars that include either Hybrid with ERS or non-hybrid builds (private teams only) and only use petrol or diesel 4-stroke engines and limited to 5500cc but there is no cap on engine capacity for hybrid LMP1 cars. The minimum weight is between 833kg to 878kg with specific dimensions including both the least and most allowed measurements. The max engine power is also limited by fuel flow management.

LMP2
Yep, Le Mans Prototype 2 which looks a lot like LMP1 but really isn’t. This class is for teams independent of manufacturers or engine suppliers wherein independently owned and managed racing companies build this car with no production minimum needed. But the selling price of a completely new car, not including the engine or homologated electronic equipment, must not exceed EUR 483,000. Engines need to be homologated, 4.2-litre V8s without direct-injection producing no more than 600bhp while minimum weight is increased to 930kg. LMP2 cars have blue number panels with white numbers as one of the means of distinction from LMP1 cars.

LMGTE PRO & LMGTE AM
These comprise the majority of the grid and are the ones where fans can really support their favourite sportscars or racing teams. Standing for “Le Mans Grand Touring Endurance”, these are cars originally built as road-going sports cars and are available for sale thanks to the dealer network of a manufacturer recognized by the Endurance Committee.

The PRO and AM division is for the expereince levels of the drivers, with PRO cars wearing green with white numbers and the AM cars wearing orange with white numbers. The engines are restricted to 5500cc maximum if naturally-aspirated and 4000cc if turbocharged. The general minimum weight limit is set to 1245kg but the organizers can change it if needed to maintain a balance of performance across the grid.

Each team uses a group of drivers per car over the course of the 24-hour race and the drivers are assigned to a specific car even if a team is running multiple cars. Some of the world’s best drivers compete across various classes but usually the best of the best race in the LMP categories as that’s the best shot at an overall victory at Le Mans. The lineup this year includes many names from F1 like Paul di Resta, Juan Pablo Montoya, Kamui Kobayashi and Jenson Button. Till last year, Mark Webber was part of Porsche’s winning team at Le Mans. This year, plenty of attention will be on Fernando Alonso who is competing in the series, parallel to his ongoing F1 season with McLaren, driving at Le Mans for the Toyota Gazoo Racing team. There are some big names from Formula E (former F1 as well) in the series including Sebastian Buemi and current championship leader Jean-Eric Vergne.

Those driving in the GTE classes are no less and can often surpass those from open-wheel racing formats by skill and or by experience. But every single driver in a race like the Le Mans, especially at the Le Mans, is one with tremendous skill and perseverance and that is what it takes to participate in 24h endurance racing.

Here is a quick video tour of the Circuit de La Sarthe that hosts the 24h of Le Mans:

That’s all folks. Hope you gained enough basic information about the 24h of Le Mans and maybe even will start following the WEC series. Share your thoughts in the comments below and subscribe to The Auto Loons for plenty more updates from the world of cool cars and motorsport.