After the tense but uneventful Monaco round, three different drivers had two races each of the six races so far and Lewis Hamilton was atop the driver’s championship leaderboard with Sebastian Vettel close behind. The racing on Sundays hasn’t been exciting at the front and some have called them dull enough for fans to ask for a refund. However, this season is definitely more competitive than recent years with Ferrari and Red Bull taking away Mercedes’ dominance in the hybrid engine era of Formula One.

The Montreal racing circuit, named after Canadian Formula 1 racer Gilles Villeneuve, has been a strong point for Lewis who has won it six times, three times in a row leading up to this one. But this year, Mercedes and Hamilton did not have the pace advantage over their competitors and so the stage was set for a comeback from Ferrari. The Reds hadn’t taken pole or won in Canada since 2004 but Sebastian Vettel was able to break that streak this weekend in dominant fashion. The two Finns, Valtteri Bottas and Kimi Raikkonen were holding their own, staying in the top four with the Mercedes man even outperforming his teammate. Meanwhile Red Bull and Max Verstappen were in it too, lapping quickest of all in free practice while Daniel Ricciardo wasn’t far off the pace either. 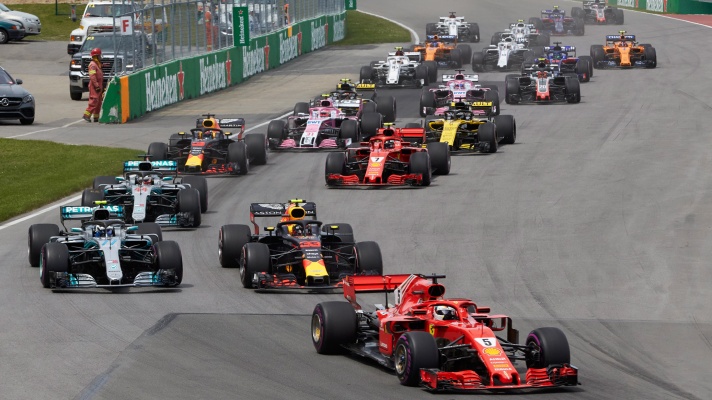 Vettel was in complete control from qualifying till the end of the race this weekend. He set a record-setting lap time in qualifying to claim pole position and was off to a great start in the race. Ferrari was running a similar tyre strategy to Mercedes, starting on a set of UltraSofts and switching to SuperSofts for the second stint. For the entire 70 laps which included a Safety Car in the first three laps, Vettel was in the lead. Even on the restart after the super early safety car, he didn’t take long before pulling away from the rest of the pack. After pushing his set over the halfway mark, he was able to pit and come out without losing track position. He missed out on the fastest lap of the race by one-hundredth of a second, but otherwise had the perfect race weekend, one that gave Ferrari a win at Circuit Gilles-Villeneuve since Michael Schumacher in 2004, and also securing his 50th F1 career win. Valtteri Bottas qualified second on the grid and after fending off Verstappen in the first couple of corners, he spent the rest of the race chasing the Ferrari but was simply outpaced and kept at a comfortable distance. In the last quarter of the race, the Finn was making ground on the German and had closed the gap from over 5 seconds to just under 2 seconds but made a mistake into the first corner of the lap and lost all his progress. He spent the last 10 laps with Max Verstappen closing in, finishing in P2 just a second clear of the Red Bull racer who managed to claim his second podium of the year.

Verstappen showed a more controlled side of his driving despite a headline-grabbing outburst in pre-race interviews where he said he might head-butt someone if he was asked any more questions about his crashes or aggressive driving style. After a clean attempt on Bottas on the first lap, he wasn’t quite able to catch Bottas until the last laps but this patient approach did earn him and the team valuable points in P3. His teammate Daniel Ricciardo qualified sixth fastest got the jump on Lewis after a very well executed pit strategy and was able to hold his ground to secure a P4 finish. Not that the Aussie had an easy race what with Hamilton keeping the pressure on him for the last 20 laps. Both Red Bulls had started on HyperSofts but got no pace advantage and pitted much earlier than the race leaders. 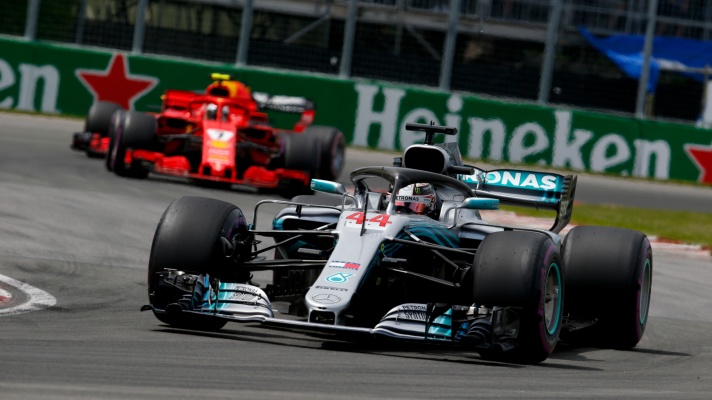 Lewis Hamilton, who came into the race leading the Championship by 14 points, was struggling to get the most out of his Mercedes all weekend and qualified fourth fastest. Things got worse at the start of the race as he reported some power unit troubles and was asked to pit super early, on Lap 16, despite running the UltraSoft that could have easily taken him to the halfway mark. The early pit did help fix the power problem a bit but he pitted at the same time as P3 runner Verstappen and on the next lap Daniel Ricciardo was able to put in a lap fast enough to pit and rejoin the track just ahead of the Mercedes. This cost Lewis both P4 and a chance to try for a podium finish. The defending champion eventually finished in P5, having reeled in Ricciardo too little too late and is now a point behind Vettel in the driver’s championship standings. Kimi Räikkönen had a quiet weekend in Montreal, a mistake on his final attempt in Q3 putting him third on the starting grid. It was a solid if inexcitable performance from the Ferrari driver but pit stop brought him out just behind Hamilton and he finished the race in P6. The top six were within half a second of pole-sitter Vettel and were almost a lap ahead of P7 finisher Nico Hulkenberg.

Speaking of the Renault driver, the Renault team had a decent weekend in Canada even though he crashed in first practice. Nico managed to qualify seventh fastest (best result for a middle-order team) and ran a strong race and managed to cross the line in…P7. Carlos Sainz had a similarly sketchy performance in practice but was able to qualify ninth fastest and managed to finish P8, giving the Renault team the best result in the circumstance and some very valuable points for the constructor’s championship. He did have a couple of moments, the first when he collided with Sergio Perez at the restart which sent the Force India off track and the second time when he Bottas lapped him down the inside of Turn 1, but the Mercedes overshot it and was behind him yet again. Force India was able to get some points in Canada thanks to Esteban Ocon who qualified eighth fastest and finished in P9. Perez had started tenth on the grid but his attempt to pass Sainz at the restart nearly took him out but the veteran F1 racer used his experience, as did others around him, to rejoin the track safely enough. He did have to pit early to switch from HyperSoft to SuperSoft and then pit a second time around Lap 44 which meant he could only manage a P14 finish.

Haas had another difficult weekend with no points and no cars in Q3 but it was a better performance than Monaco. Kevin Magnussen qualified 11th fastest and finished the race in P13 while things were a bit more complicated in Romain Grosjean’s case as they tend to be. The Frenchman didn’t get to set a qualifying time as his car’s engine was billowing smoke as soon as he left his pit garage and even he was laughing at his misfortune. But he put in a superbly strong performance on Sunday, starting at the back of the grid and doing an impressive stint of 48 laps on his UltraSoft tyres and was able to cross the line in a respectable P12, given the circumstances. Alfa Romeo Sauber is having the best season of recent years as F1 rookie Charles Leclerc managed to qualify 13th fastest, had an impressive battle with Fernando Alonso for track position and was able to cross the line in P10 to secure another championship point. Teammate Marcus Ericcson, however, didn’t have such a good weekend, starting 18th on the grid and finishing P15.

This Canadian GP also happened to be Alonso’s 300th F1 race but the Spaniard wasn’t having a good weekend, considering that he could only qualify 14th fastest. He had a decent little battle with Leclerc before the McLaren curse struck him again and he had to retire his car on Lap 40 which was disappointing for him and the fans. But he does have the 24h of Le Mans to look forward to next weekend where he’ll get behind the wheel of an LMP1 Toyota racecar and that seemed to keep his spirits up. Stoffel Vandoorne started fifteenth on the grid, caught a puncture on Lap 1 after making contact with the Williams of Lance Stroll, and at the end, he crossed the line in P16.

We’re now down to the last two teams on the grid – Scuderia Toro Rosso Honda and Williams Racing Mercedes. The sister Red Bull team’s younger driver, Pierre Gasly, has done better than most expected. He qualified 16th fastest but a grid penalty put him down to 19th at the start and he did an impressive job to manage a P11 finish. Sergey Sirotkin in the Williams had another backmarker weekend, starting and finishing in P17, which is more than what can be said for Lance Stroll. The Canadian really made a fool of himself at his home race, starting 16th on the grid and then causing a crash on the opening lap. He had already made contact with Vandoorne on Turn 4 and then on the exit of Turn 5, he had Brendon Hartley on the outside when he lost control of his rear end, sliding his car into the Toro Rosso which got pushed into the wall and bounced into the air. Both drivers were okay after the crash but this was a terrible disappointment for the New Zealand racer yet again, getting caught up in the mistake of another car and being taken out of the race, particularly after an impressive qualifying that put him 12th on the starting grid. Talks of Hartley being replaced by a Honda-lobbied Japanese racer are already circling the paddock while Stroll’s streak of disappointing performances in a terrible Williams car further endanger his future in F1.

A funny moment of an otherwise uneventful Canadian GP was when the celebrity supermodel who was called to wave the chequered flag was misguided and Winnie Harlo ended the race a whole lap sooner. Much of the internet has been going at her, but she only did what she was informed of, and that puts the organizers at fault. But that’s the rule, the chequered flag signals the end of the race and so the final lap count is less than 70. Cue the comments for jokes of the race being so boring that even F1 wanted it to just end already.

The action resumes in two weeks as Formula One returns to France after a long time to race at Circuit Paul Ricard in Le Castellet. Regaining the lead in the championship will surely give Ferrari and Vettel a good morale boost but can they carry the momentum forward or will the Bulls and the Silver Arrows catch them back up? There’s still plenty of races left but it’s all pretty close. The 2019 F1 changes were already announced some weeks ago which I’ll be discussing in the mid-season break with more information so do subscribe to The Auto Loons for more F1 updates.