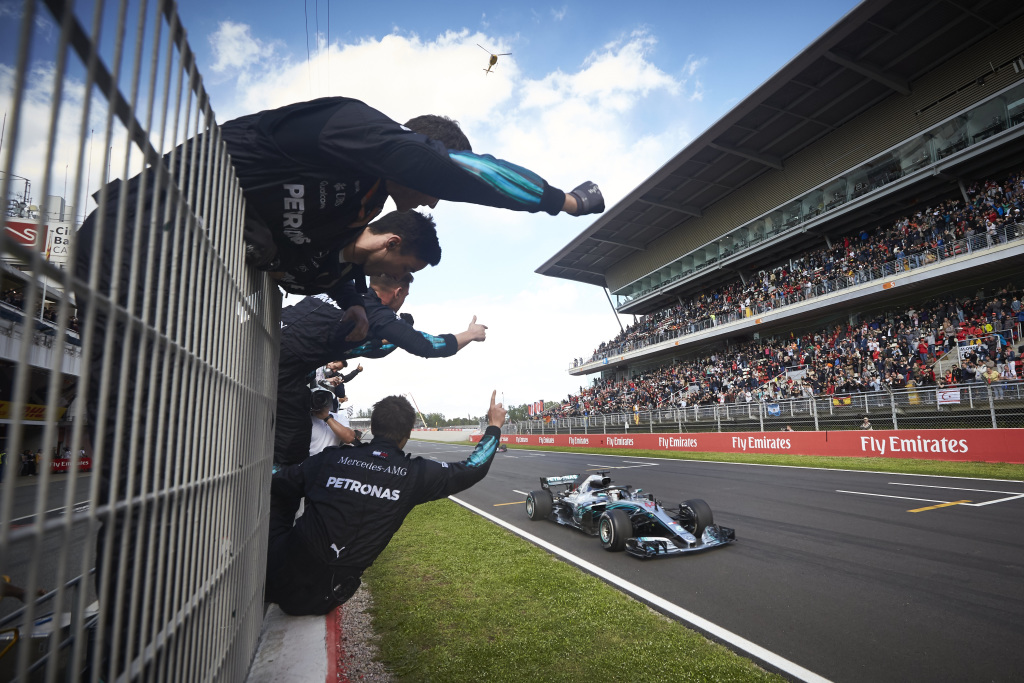 The sport headed to Europe for the first time this season and onto F1’s current test and development track — Circuit de Barcelona-Catalunya in Spain. Teams had some newly developed bits on the cars, most notable were Ferrari’s halo-mounted rear-view mirrors and the new nose on the McLaren cars. The crowd was looking forward to a treat when Robert Kubica came out for a few laps during free practice in the Williams but his spin revealed that the car really was as bad as Lance Stroll was complaining it to be. But there was one team that was simply better and quicker than the rest of the grid – Mercedes.

Lewis Hamilton was the dominant driver for the whole weekend while his teammate Valtteri Bottas was able to do enough to stay ahead of the Ferraris and Red Bulls. Being number two isn’t exactly ideal but definitely an improvement over his Azerbaijan Grand Prix experience. The defending world champion set a blistering time to qualify on pole with Bottas being less than half-a-tenth of a second slower, giving Mercedes their first front-row lockout this year. Sebastian Vettel was off the front row for just the second time in 2018 after qualifying third fastest, almost a full tenth slower than Bottas while Kimi Raikkonen qualified fourth fastest to keep Ferrari ahead of the Red Bull drivers. Max Verstappen managed to outqualify Daniel Ricciardo as they started P5 and P6, with clear instructions to focus on the best possible team result after being “put on the naughty step” after the Baku disaster. Kevin Magnussen got the best possible result for Haas to start P7 on the grid while his teammate Romain Grosjean qualified tenth fastest. Between them were the two Spaniards, Fernando Alonso qualifying P8 while Carlos Sainz managed to set the ninth fastest time around the Catalunya circuit.

Hamilton got off the line very well and managed to hold his position into Turn 1 while Bottas got overtaken by Vettel. Going into the long right-hander (Turn 3), things got interesting. Grosjean had already made up a few positions when he lost the rear-end of his Haas trying to dodge his teammate who had had a bit of a wobble. Going sideways off the track, the Frenchman could have just skidded into the barriers but he tried to recover it, albeit with no intention of bringing the car back onto the track. Unfortunately, that’s not what happened. Romain floored the accelerator, lighting up his rear tyres and creating a smoke screen while his car veered back onto track into the rest of the grid making their way around the corner. In the process, he took out Nico Hulkenberg and Pierre Gasly while Alonso just about managed to get around without sustaining too much damage. After his gaffe in Baku, this incident just makes Grosjean’s future at Haas or even in F1, even more uncertain. This massive crash brought on the safety car right away and it stayed out for about six laps before the racing could resume.

At the restart, Lewis shot off and was able to create a two-second gap to Vettel in just a lap. He was able to assert his dominance after that dramatic start as the Brit was pulling away further and further away from the Ferrari of the German. For the remainder of the race, it was apparent that it was Lewis Hamilton’s day and nothing and no one could catch him. The only time he wasn’t leading the race was when he pitted after about 25 laps and was behind the Red Bulls who had not pitted by then. In the end, the current World Champion was able to take a decisive victory, a familiar sight of Mercedes’ dominance over the last few years and took the chequered flag with a gap of over 20 seconds to the man in second. That man was his teammate Valtteri Bottas who had put in a solid performance all race. He didn’t have a direct battle for P2 with anyone, but a consistent and error-free drive from the Finn on the new Medium compound tyres to secure himself and his team the most possible points made for a decent result. Ferrari had made Vettel pit before any of the top six, on lap 18, and that’s probably what cost him a podium finish. Despite thwarting Bottas’ attempt to jump ahead of him after the Mercedes team pitted him just two laps later, Vettel was not able to gain much sufficient ground on the front four who had not pitted as of Lap 22 and was running in P5. Around Lap 35 after the others had pitted, Vettel was still 10 seconds behind race-leader Lewis while Bottas was only two seconds behind him.

Esteban Ocon’s unfortunate retirement on Lap 41 of 66 brought on the Virtual Safety Car and Ferrari decided to put Vettel on fresh rubber. However, none of the others pitted and it also happened to be a slow stop, which brought Sebastian out on track in P4, behind Max. The German was on the limit as soon as VSC ended but was struggling with his tyres and simply could not catch the Red Bull of Verstappen and finished fourth. Kimi Raikkonen had disappointing Spanish GP himself after he had to retire his car around Lap 26 due to an engine issue while he was having a decent run in P2 at that time. Verstappen’s third-place finish was a much-needed podium for the youngster given his recent list of mistakes, both for him and for the team. He too drove excellently all race, from keeping Ricciardo at bay at the beginning to driving the last 20 laps with a damaged front wing after his incident with Stroll’s lapped Williams (when the VSC was turned off). His teammate was pushing in the last few laps of the race to try and catch Vettel but it was too little too late and crossed the line in P5. Magnussen got Haas the best possible weekend and managed to cross the line in P6, staying clear of any chaos, good strategy and managing his tyres just right. 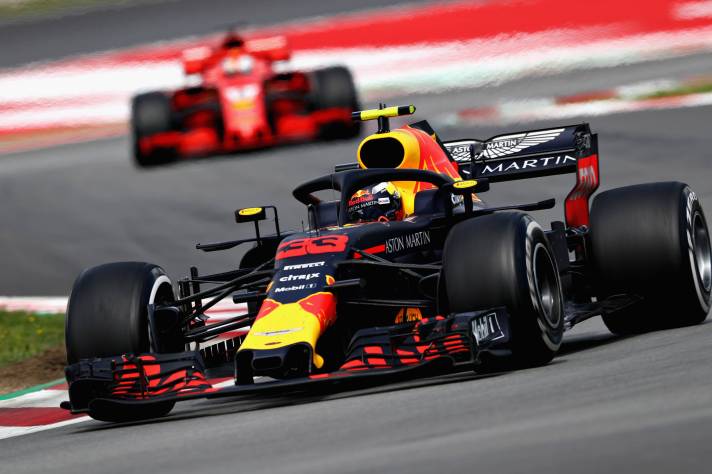 Carlos Sainz was able to finish the race in P7 ahead of his fellow countryman Fernando Alonso, maintaining the record of getting McLaren some points every race this season. Both drivers were given a tough time by the Alfa-Romeo Sauber team at different times during the race. Marcus Ericsson put up a good, clean fight against the Renault of Sainz but was eventually beaten by the faster car and finally crossed the finish line in P13. His teammate Charles Leclerc did a fantastic job against Alonso in the first half of the race, beaten by skills as there isn’t much of a performance difference between the Sauber and Ferrari. The rookie managed to secure his first consecutive points finish after crossing the line P10, behind the Force India of Sergio Perez. Perez’s finish is commendable after his poor form in qualifying that placed him 15th on the starting grid, while teammate Ocon was also looking to finish in the points before his aforementioned retirement. The young racer had a poor pit stop where the crew struggled with the left-rear tyre which was still not fitted on properly forcing him to park up. Alonso’s teammate Stoffel Vandoorne had to retire his McLaren down the start-finish straight just as Lewis was finishing the race 3 laps ahead of him. The rest of the finishers included the Williams duo – Lance Stroll in P11 and Sergey Sirotkin in P14, while Brendon Hartley got his Toro Rosso across the line in P12.

This result allowed Lewis to extend his lead on Vettel to 17 points as the season takes them to Monaco next. Will Ferrari catch up with Mercedes before the mid-season break? Or will Dani Ric and Red Bull make a comeback to upset the top standings? Subscribe to The Auto Loons and stay tuned for the latest updates from Formula One and Formula E.