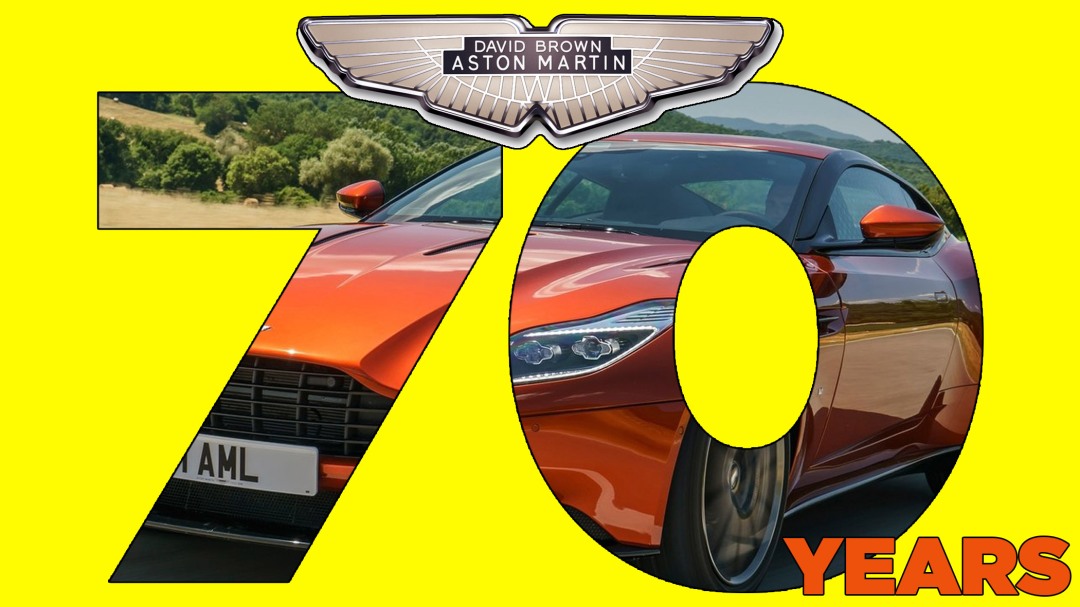 Heritage is a big element of being a renowned carmaker whose audience seeks performance that thrills our deepest instincts without necessarily compromising on flair or comfort or luxury. Fair to say that Aston Martin fit that box quite well without being limited to it. Yesterday, on April 25th, the British manufacturer celebrated the 70th anniversary of its iconic sporty grand tourers – the DB series.

It’s been seven whole decades since the launch of the first Aston Martin under David Brown’s ownership – the DB1, and the series is still strong in its latest generation, the DB11. Over these seventy years, Aston Martin’s DB badged cars have mesmerized millions, offered a splendid experience to the thousands of loyal owners worldwide, won some of the world’s greatest motorsports prizes including the 24 Hours of Le Mans and even became a part of cinematic history.

David Brown was a petrol head to the bone, building his first car at age 17 by fitting an engine and gearbox into a self-made chassis. He called it the ‘Davbro’ which sounds like a name that could fit a modern musician, but not one that would survive the flow of time. On Valentine’s Day in 1947, he paid the princely sum of £20,500 to buy Aston Martin, well aware that he possessed the technical know-how and capital to secure a future for this British car company. But it’s what he acquired next that gave him what was needed to ensure the success of Aston Martin cars. David obtained Lagonda for £52,000 and thereby acquired the WO Bentley designed 2.6-litre twin-cam straight-six engine.

The first car was launched as the ‘2-litre Sports’ but it has been retrospectively referred to as ‘DB1’ from 1950 onwards. It was the 1949 successor that shaped the foundation and characteristics of an Aston Martin. The DB2’s beauty, performance and quality established the brand and lasted nearly a decade with updated forms. What came next was even faster and even more svelte. It had to be, to put the brand back in contention with its rivals in the sportscar business, and the result was the DB4.

Powered by a race-derived 3.7-litre straight-six DOHC engine built originally by Tadek Marek, producing 240bhp and 325Nm of torque that was enough for a top speed of 225kph and a 0-100kph time quicker than 10 seconds. There were five series of the DB4 in its lifespan which included the slow but steady evolution of Aston Martin’s design language. It got a convertible iteration in 1961 with similar styling but since only 70 of these were made, they were quite exclusive. Then there is the stuff of legend –  DB4 GT, which was a lightweight high-performance version of the standard DB4 Touring with a shorter wheelbase, no rear seats and a thinner aluminium skin. The real magic was the engine, offered in two versions  – 3.7-litre and 3.8-litre, both with two sparkplugs per cylinder with two distributors and three twin-choke carburettors and even the cylinder heads were modified for a better compression ratio. That upped the power to 302bhp with a 0-100kph time of around 6.5 seconds while the top speed of 243kph made it the fastest road legal car at the time. A total of 75 GTs were built, 19 of which were then modified by Zagato works in Italy in 1961. Ercole Spada at Zagato made it even lighter and smaller, replacing steel components with aluminium ones and smoother curves that make it one of the most beautiful cars made to date. Interestingly, the Aston Martin DB4 GT Zagato is the favourite DB of current Aston Martin CEO Andy Palmer.

So with Aston Martin’s incredible success with DB4, the bar was set pretty high for the next model. Therefore in 1963, the brand launched the DB5 which was a handsome car in its own right designed by Italian coachbuilder Carrozeria Touring Superleggera. But it shot to stardom after appearing in the third James Bond film ‘Goldfinger’ with the impeccably sharp Sean Connery behind the wheel. Equipped with gadgets like smokescreens, front-mounted machine guns and even an ejector seat, this was the movie car that made Aston Martin a familiar name in almost any household. However, it had a very short run of just two years and less than 1,100 units were produced between 1963 and 1965.

Next came DB6 which was then sold alongside the Willaims Towns-designed DBS of 1967. The DB6 stayed in production till 1970 and became the highest selling of the series, while DBS was larger, wider and in 1969 came equipped with a four-cam V8 engine that stayed in production until for a couple of decades. However, things took a bit of a downturn as Sir David Brown (knighted in 1968) had to sell Aston Martin in 1972 and it would be a 23-year wait before his initials would appear on the cars again.

Then chairman Walter Hayes offered Brown the title of Honorary Life President at Aston Martin and David Brown granted the brand the use of his initials once again. Sadly, he passed away in 1993, a year before the all-new Aston Martin DB7 went on sale.

There was another long wait for an all-new Aston Martin DB series model so when they did build one at the Gaydon HQ in 2003, they jumped a number and called the new car DB9. This model is my favourite thus far as it was the car that introduced me to the name Aston Martin and it stayed in production for quite some time with various updates along the way as well as returning as Bond’s company car. But the first Aston Martin road car that was bespoke to 007 was the DB10. Sadly for us, it was never put into production and remains an extremely rare movie-edition car of modern times.

In 2018, we have the Aston Martin DB11 which is another step forward with the times for a badge that has become an integral part of the company in these 70 years. Currently sold with two AMG sourced yet heavily tweaked engine options – a 4.0L V8 bi-turbo (503bhp/675Nm/301kph)and a 5.2L-V12 bi-turbo(600bhp/700Nm/322kph). Featuring an all-new architecture and with Aston Martin’s recent finance boost, the DB11 ushers the British carmaker into a new era while the DB name stays strong. There is also a lot of excitement surrounding the soon-to-be-launched DBS Superleggera which will have the role of reviving another famous branch of the DB Bloodline.

Which is your favourite Aston Martin DB Series model? Share your answers in the comments below.