Most innovations and revolutions in the automotive industry are accepted on the back of motorsport achievements and the era of all-electric cars is being ushered in a similar fashion. We have Formula-E, the Tesla Model S that can do 0-100kph in just 2.5 seconds, Nio EP9, Rimac and now this – VW’s all-electric prototype racecar built for one purpose only, to set a new record time for the iconic, challenging and perilous Pikes Peak hill climb course.

After ‘I.D.’ was introduced in 2016 as VW’s all-electric brand, the German carmaker has already showcased four pre-production concept models that are set to get the ball rolling for them with a focus on autonomous driving tech, range and adequate performance. This prototype is the first high-performance build of the series and has been bestowed the title of every Volkswagen model built for the track and a suffix to highlight its purpose – I.D. R Pikes Peak. The lithium-ion battery pack in this bad boy will power two electric motors tuned to a capacity of 680bhp and 650Nm of torque, tuned for absolutely bonkers acceleration rather than outright top speed. Weighing just under 1,100 kg, the I.D. R Pikes Peak can accelerate from 0 to 100kph in 2.25 seconds and will top out at 240kph.

Those definitely sound like the kind of performance figures they’d need to beat the current EV record up Pikes Peak – 8m57.118s but they still need a human with immeasurable courage behind the wheel to push this thing to the edge without going off one. And so VW hired the best they could – WEC Le Mans winner and current Pikes Peak champion, Romain Dumas.

Volkswagen has a history of taking on the challenge presented by the Pikes Peak run, most notably in 1985, 1986 and 1987 when they ran a twin-engine Golf (pictured above) up the mountain road. Two engines now replaced by two electric motors for more instantaneous power delivery with almost zero emissions, coded and wired for the quickest run possible. The company engineers also mention that nearly 20 percent of the electric energy required for the 20km uphill record run will be generated from braking thanks to the energy recovery setup of electric engines. Fair enough to say, the Volkswagen I.D. R Pikes Peak prototype is on a very tight diet.

Then there are the looks which are excitingly intimidating. It’s got an aero package that could make a GT3 car feel stock, with the wide front splitter that extends pretty far out in front of the nose of the car and the MASSIVE rear wing. The sculpted aerodynamic shape that houses the cockpit in between the four wheels is reminiscent of an LMP racecar is built entirely of lightweight materials, primarily carbon fibre. It has a permanent four-wheel-drive setup with active torque distribution to keep the prototype planted to the asphalt allowing it to brave the 156 corners of the route. 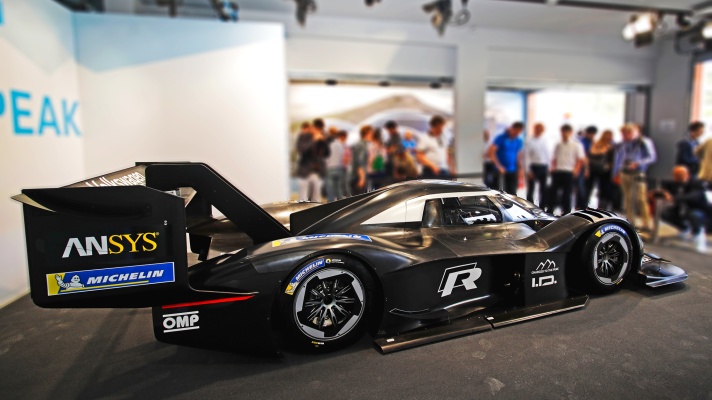 Volkswagen will make the record attempt with the I.D. R Pikes Peak on June 24, so subscribe and stay tuned for further updates. Who do you think will join the motorsport times competition with electric cars? Do you think this prototype can beat the record? Share your thoughts in the comments below.

2 thoughts on “Aiming for the top with e-power: Volkswagen I.D. R Pikes Peak”