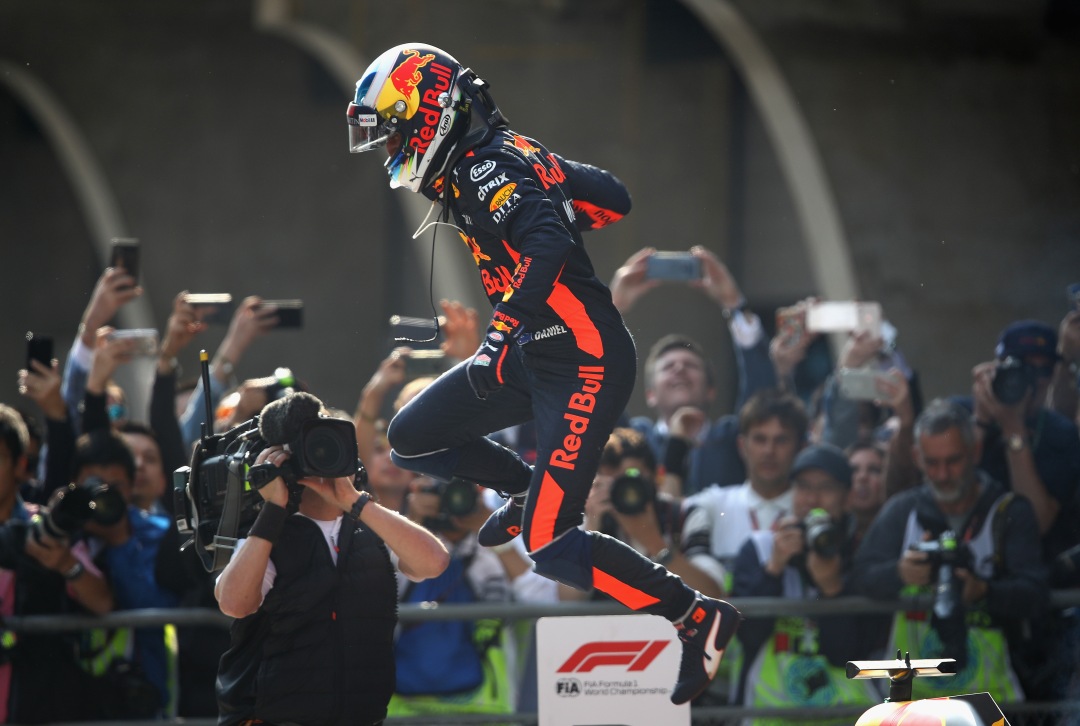 Ricciardo charges through to victory in Chinese GP: F1 2018

It’s the third round of the 2018 season of Formula One, Ferrari and Sebastian Vettel coming in strong after two back-to-back victories with Mercedes and Lewis Hamilton on the backfoot and the Red Bulls struggling with reliability issues. With that start to the weekend, nobody could have expected what actually happened.

During practice, things were close as usual between the Silver Arrows and the Reds while the Aston Martin Red Bull Racing cars were the only ones keeping up with them. While Lewis topped the first two sessions, the Ferrari drivers established their dominant pace in the last session. Things were looking bleak for Daniel Ricciardo however when his car suffered a turbo failure which meant his team had to repair and reassemble the engine in time for qualifying on Saturday morning. A tough task but the Red Bull garage managed to pull it off with less than five minutes to spare.

In qualifying, everyone was surprised by just how quicker Ferrari was than Mercedes, including Ferrari themselves who were expecting margins to be much closer. In the final round, Vettel pipped Kimi Raikkonen to secure pole and ensured another front row Ferrari lockout on the starting grid. Valtteri Bottas in his 100th F1 race managed to be just quicker than Lewis and took P3 while the Brit had to settle for P4 on the grid. Max Verstappen was the quicker of the two Bulls and qualified P5 while Ricciardo’s hastily rebuilt engine was enough to get him a P6 spot on the starting grid. Behind them, Nico Hulkenberg was able to clock the seventh fastest time in the Renault ahead of Force India’s Sergio Perez while his teammate Carlos Sainz started ninth on the grid. The final top ten spot went to Romain Grosjean just ahead of teammate Kevin Magnussen which was still a decent qualifying from the Haas team. Last weekend’s star Pierre Gasly was starting in a more familiar spot in P17.

It was a clean start on Sunday with Vettel going down the inside line blocking off Kimi which allowed Bottas to move up to second. Verstappen went around the outside on Turn 1 and the spectators held their breath as he and Lewis were once again side by side, but the Dutch kept it clean and moved up to P4. As they made their way around the Shanghai circuit’s long sweeping turns and the really long straight, lap after lap, Vettel got settled into his lead ahead of Bottas who had also built a gap away from Verstappen who had got past Raikkonen in the first lap itself. In the middle order behind Hamilton and Ricciardo, both cars of Renault and Haas were in the points while Perez had dropped back and Lance Stroll managed to get up to P12 after starting P18 on the grid. After the first ten laps, there was no change in the top order while Fernando Alonso was duelling it out with Grosjean to get into the points.

The pit stops started around Lap 15 but it was the Red Bulls from the top order who pitted first as Verstappen and Ricciardo headed in right behind each other and on Lap 18 and switched to the Medium compound tyres, the hardest available for the Chinese GP.  Lewis pits the following lap and is followed by Bottas while the Ferraris stay out on track on the Soft compound tyre. In response to Mercedes, Vettel pits the lap after Bottas and also switches to the Medium compound while Raikkonen stays out on track to take the lead. Ferrari’s crew made a quick and flawless pit stop but were beaten to the punch by Bottas who came rocketing down the straight to get ahead of Vettel as he was exiting the pits.

Raikkonen had a good lead on his Soft tyres but was being caught up quickly as his tyres got more and more degraded, Bottas with the pedal to the metal and Vettel right behind him. Kimi managed to hold up his fellow Finn Valtteri for a little bit before letting the Mercedes and Vettel past him as he headed for the pits near the end of Lap 27 after an unexpectedly long stint on the Soft compound and switched to Mediums as well, dropping back to P6 as he rejoined the track. Things seem set in place with Bottas and Vettel poised to battle for the win near the end of the race with Verstappen catching them too while Hamilton may miss the podium again. But then the two Toro Rosso drivers had a bit of a brain fart as Gasly went and drove into the inside of Hartley on Lap 30.

While it was only Yellow Flags at first, the debris around the turn was too serious and hence the Safety Car was deployed the next lap. Red Bull were able to make the most of this development and called in both their drivers at the same time, again, and put them onto the Soft compound tyres for the remaining 20 laps or so and were able to rejoin the track behind the Safety Car while still in the top six. Others who took this opportunity to do the same were the Renault and Force India teams as the debris was being cleared from the track. The Safety Car finally returned to the pits at the end of Lap 34 and the race restarted with Bottas still ahead of Vettel, followed by Hamilton, Verstappen, Raikkonen and Ricciardo in that order.

The Red Bulls were clearly quicker with the fresh, softer, grippier tyres and that’s what Daniel made the most of when he overtook Raikkonen on Lap 37, executing his special overtaking manoeuvre diving down the inside braking late on the hairpin turn after the long straight and making it stick, moving up to fifth. Verstappen tried to do the same as he caught up with Lewis on Lap 39 and tried to make a move around the outside but was shut out and went off track, losing his track position to Ricciardo but staying ahead of Raikkonen. Another lap down and Daniel repeats his sublime overtaking technique to get past Hamilton and moves upto P3, charging on towards Vettel and Bottas as well, setting the fastest times. 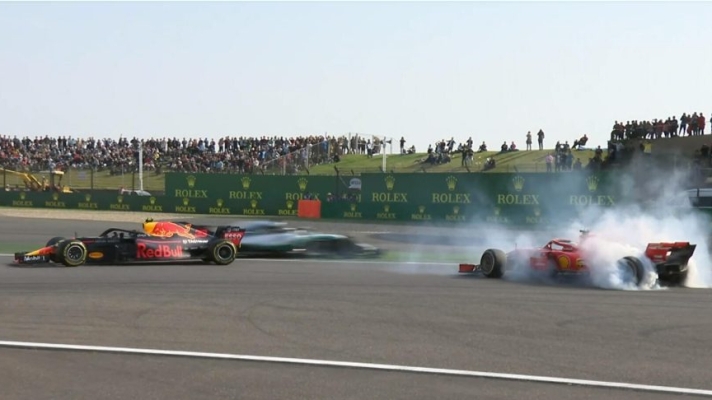 The Formula One world has many expectations from young Verstappen and we expect him to upset the current balance that is in favour of Mercedes and Ferrari, but we expect him to do so by winning races. Unfortunately, the Dutch racer manages to upset the order by driving into the championship contenders, as he collided with Vettel on Lap 43. Daniel was already ahead and chasing after Bottas when the incident happened that put both of them behind Raikkonen. Verstappen still had pace in his fresher, grippier tyres and chased down the leaders while Vettel was struggling with his worn out tyres and what can only be a feeling of great frustration. The German was overtaken by his fellow countryman Hulkenberg in the Renault soon after while the Race Director handed a 10-second penalty to Max for the incident.

Two laps later it was Ricciardo who was leading the race and with just over 10 laps to go, the Australian made the most of his tyres while they were at their best and surged ahead, setting the fastest times, lap after lap. Bottas and Raikkonen were falling back but were getting closer to a battle of their own as the laps counted down with Lewis closing in as well. But Hamilton was on the slower tyres and was passed cleanly by Verstappen on Lap 48 while Raikkonen had settled into a definite third while chasing after Bottas who knew that victory was not on the table anymore. Vettel was clearly struggling for pace as Alonso had caught up to him on Lap 55 and made a less-than-polite overtake, putting the championship leader down into P8, his race and lead in the championship ruined.

It was Daniel Ricciardo’s Red Bull that took the chequered flag, almost 9 seconds ahead of Bottas in second and Raikkonen salvaging a podium finish after a mad Chinese Grand Prix. For the Australian, it’s his sixth race win after having started outside the top three on the grid, a trend that applies to almost all his race wins. What does he think about it? “I don’t win boring races!”

For the first time in the hybrid era dominated by Mercedes, we’ve gone three races without a Mercedes win while Lewis’ P4 finish as compared to Vettel’s P9, has allowed the defending champion to close the gap. While much of the focus will be on the Red Bull camp and around Max’s risque style of racing, showing little regard for clean racing, the young racer has taken responsibility for the incident with Sebastian. Notably, Ferrari were quicker than Mercedes all weekend and Red Bull wasn’t far behind which could still mean this season may turn out to be more than a two-horse race.

Subscribe and stay tuned for the latest updates from Formula One as we head to Baku in Azerbaijan two weeks from now for more racing action. Will we see another heated battle between Hamilton and Vettel or will Ricciardo slip past them both again? Share your thoughts in the comments below.