As the electric motorsport continues to gain popularity, more and more cities are open to being hosts for these races and this year Rome joins the Formula E calendar for the first time ever. The street circuit goes past many iconic monuments while the course includes a terrain that rises and falls which made for some cool mini-moments to watch the speed-restricted racecars catching some airtime as well.

It seemed like Mahindra Racing and Felix Rosenqvist would have a shot at redemption after the disappointing performance in Uruguay. The young Swede was setting the quickest times through practice and was second fastest in group qualifying, just behind Andre Lotterer in the Techeetah car followed by Sebastian Buemi in the Renault e.dams, Sam Bird in the DS Virgin car and Mitch Evans in the Jaguar as these five headed into Super Pole. Defending champ Lucas di Grassi was sixth fastest, ahead of Oliver Turvey’s Nio followed by this season’s championship leader Jules Eric Vergne and Audi teammate Daniel Abt qualified ninth fastest. Nick Heidfeld managed to secure the tenth spot on the starting grid ahead of Alex Lynn. At the rear end of the grid were Jose Maria Lopez from the Dragon team and Anthony Da Costa in the Andretti electric racer, both of whom did not set a qualifying time. In the Super Pole, it was Rosenqvist who came out fastest despite having a bit of contact with the wall and was joined by Bird on the front row, Evans and Lotterer in the row behind and Buemi starting fifth on the grid.

During the first stint, Rosenqvist seemed to be comfortably in control leading the race from the start even with Bird and Evans not far behind. The usual opening lap drama involved Alex Lynn crashing into Jean Eric Vergne but neither suffered significant damage. The next lap saw Mortara from the Venturi team who had started 17th on the grid, push Lopez into the wall in a defensive manoeuvre but again both cars escaped without serious damage. Things were not as chaotic going forward until it came time to switch cars near the halfway mark, Buemi getting impatient and nudging into the back of the Techeetah of Lotterer. Lotterer, Evans and Di Grassi were saving energy with the strategy to pit a lap after the race leaders Rosenqvist and Bird.

It was around this time that things got messy in the middle order where Heidfeld was leading a group fighting for track position, Lopez was going in deep down the inside line but Turvey stuck his Nio in between them and ended up taking out himself and the Mahindra car. A second later, his teammate Fillipi ended up ploughing into his stationary car. All the cars were able to make it back to the pits to switch over but all of them were out of contention for serious points from this race. 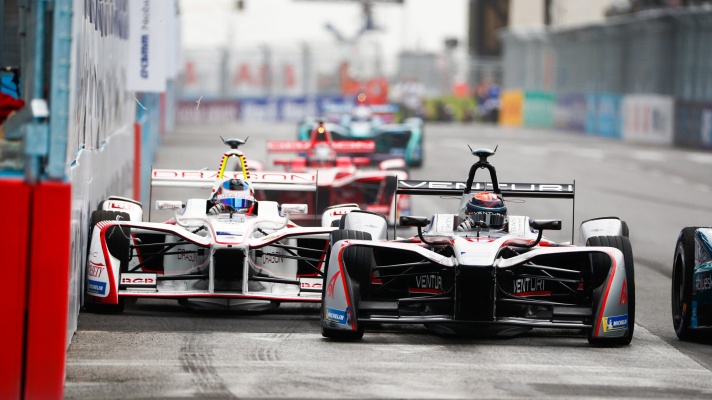 Meanwhile, in the pits, Felix and Sam pitted together but the Mahindra driver was able to come out not only ahead of the DS Virgin car but also with a bigger margin. Nelson Piquet Jr. had to retire his Jaguar in the pits due to a technical error while Evans and Lotterer pitted the next lap, just ahead of the two Audis. The top order stayed the same except for Buemi who had moved up the order having pitted earlier than Lotterer. But on Lap 23, it all went wrong for Rosenqvist and Mahindra after he broke his rear left suspension on one of the curbs around the tight chicane sections, which is a major setback for any championship title aspirations for both him and the team despite their excellent performance.

Lucas Di Grassi wasted no time in mounting a charge up the order in the second stint, getting past Lotterer and then past Buemi on Lap 24 by using his Fanboost down the downhill section of the track and moving into third place. Sam Bird was leading the race but had fewer energy reserves than either Evans or Di Grassi at this stage which would make a difference in the final laps. But it was just a matter of five laps before they were racing hard for P1, Evans put on a brilliant display of racing to defend against Di Grassi while also trying to overtake Bird. The Kiwi driver was quite intent on getting his first Formula E podium with the Jaguar and managed to hold off both Di Grassi and Lotterer up till Lap 31 of 33 but had to let the Audi past as he held onto third place.

But despite his Herculean effort, Evans was running out of juice in the last lap and had to let Lotterer past him. In fact, he had to let many cars pass him just so he could get his Jaguar to the finish line with the last possible electrodes running through his racecar. But it was Sam Bird who took the chequered flag in the first ever Rome E-Prix, Lucas Di Grassi taking second and Andre Lotterer finally getting the last podium spot after his battle with Evans. Daniel Abt finished fourth but also got the fastest lap of the race while Jules Eric Vergne finished fifth which keeps his title chances alive at the top of the standings and also adds valuable points to Techeetah’s tally in the constructor’s championship. Buemi is not having a good season so far and finished P6 while D’Ambrosio from Dragon Racing did well to clinch P7 ahead of Engel. Mitch Evans managed to cross the line in P9, a disappointing result but he will be remembered for his spectacular performance and that makes him one to watch for both rivals and fans alike. Mortara took the final point scoring position which is an impressive result given how far back he started the race. Heidfeld had a disappointing weekend but did manage to finish the race in P16.

It was an intense battle in Rome, one that puts Sam Bird and DS Virgin in title contention with just five races to go. Rosenqvist and Mahindra Racing know they have the recipe for wins, they just need to make it to the finish line but it does seem like they are out of the title race given the performance of the Techeetah racers. However, it is unwise to make such decisive predictions in motorsports, especially with that many races to go and the stakes will be high for the next round in Paris just two weeks from now. Share your thoughts and predictions in the comments below.

Subscribe to stay tuned for the latest updates in Formula E and Formula One as well.