It’s going to be a high-anticipation year for the Toro Rosso team as they switch from Renault to Honda as their engine supplier for the 2018 season. While Honda has had a terrible three years since their return to Formula 1 with McLaren, there is still chance at redemption with the unit powering the Red Bull’s sister team’s new challenger – the STR13.

Scuderia Toro Rosso has retained their blue and silver theme with red strips for the 2018 livery and has opted to make the halo the same colour of blue as the rest of the car. What’s expected is that they will have to be competing to just get into the points and also fighting off the Alfa Romeo Sauber at the tail end of the order. But hope is alive that Honda might have FINALLY got their engine right (though no such signs are visible in the current rounds of testing) which could empower Toro Rosso to be fiercely competitive in the middle order.

Of course, the car will do its part but you still need a damn good driver behind the wheel. While both their racers debuted in F1 last season, this will be the first full season for the duo – Pierre Gasly and Brendon Hartley. Though rookies in this level of motorsport, both have significant experience in high-pressure racing and are expected to offer a few surprises over the course of the 2018 season.

What do you think of the new Toro Rosso STR13? Share your thoughts in the comments below and don’t forget to subscribe for more cool content. 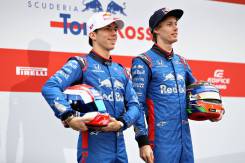