It was an exciting weekend of Formula E in Santiago and what better way for the all-electric motorsport to make its debut than with an action-packed race. Intense teammate racing, plenty of contact, a safety car and quite a few retirements made for a good spectacle as the racers whizzed through the streets of the Chilean capital.

Andre Lotterer did take pole position in qualifying but was pipped by teammate Vergne in the super pole shootout, and by Buemi and Di Grassi as well, while Sam Bird managed to qualify 5th fastest. Team Nio’s racer Filippi and Jaguar’s Mitch Evans failed to set a qualifying time but had a decent race nonetheless. Despite their success in Marrakesh, Team Mahindra had a poor qualifying session with Rosenqvist and Heidfeld qualifying 14th and 15th fastest respectively.

Jean-Eric Vergne had a dominant run fighting off Nelson Piquet while Lotterer had a good start and was already into P3. It wasn’t long though before Andre got past the Brazilian and into P2 chasing after his teammate. Things got particularly intense in the second half of the race, where Lotterer tried to get past Vergne with two memorable brown-pants moments for their team in the pits. The first came when Lotterer tried to go around the outside of Vergne which came scarily close to putting them both in the barriers. The second time, they did make contact as Lotterer drove into the back of Vergne but luckily their lead was enough to avoid losing places. In the end, the two managed a landmark achievement, getting Techeetah the one-two finish, a first in Formula E. The result also puts Techeetah and Verge at the top of the tables in both drivers and constructors’ championship tables.

Behind them Sebastian Buemi finished P3 after a relatively less exciting race, getting past Piquet and holding off Rosenqvist in the last laps. Meanwhile his Renault teammate Nico Prost couldn’t do better than a P10 finish, together their points put the Renault e.DAMS team fifth in the constructors’ title.

The now factory-backed Audi Sport ABT Schaeffer team suffered a double DNF. Defending champion Lucas Di Grassi and Daniel Abt retired early in the race due to mechanical problems. This result leaves the team 8th in the constructors’ championship so far. 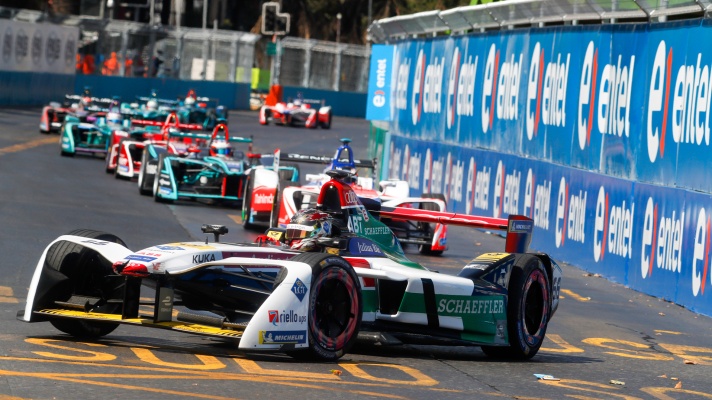 Jaguar Racing had a better team result with Nelson Piquet Jr. finishing P6 and Mitch Evans in P7, than DS Virgin even though Sam Bird finished P5. Bird’s teammate Alex Lynn was also among the list of retirees at the Santiago E-Prix. Team Mahindra suffered a big blow to their championship stand with Heidfeld having to retire and Felix being denied the podium. The result puts cost them their lead and are now second in the constructors’ title as is Rosenqvist in the drivers’ standings.

The Formula E experience will resume in just over a month’s time at the Mexican street circuit on 17th March. Stay tuned for more updates!!