While it’s not been long since we got the latest and current generation of the Ford Mustang, and we’ve come to like the look and feel of it, even accepting the fact that they are selling a 2.3-litre four pot EcoBoost engine variant as well ( which has actually been popular with their market). And now we have the new one coming out in 2018, wherein Ford has promised that the same 5.0-litre V8 will have even more power on offer, but no figures have been mentioned.

The V8 in the current GT packs in a noisy 416bhp and 529Nm of torque, while the 2.3-litre EcoBoost is capable of 317bhp and 433Nm of torque. Figures for both are likely to go up, while the V6 engine variant will be discontinued. The manual gearbox for both gets an upgrade too for better torque with the one paired to a V8 getting a new twin-disc clutch and dual-mass flywheel. And in place of the current six-speed auto, there will now be a ten speed automatic gearbox and will be available for both engines. It will – shift faster, come with paddles, reduce friction losses, and feature four different drive modes.

Also, all Mustang models are said to get new shocks for a better ride, a new cross-axis joint at the back and stabiliser bars. All of which should help improve the response and handling, thereby making it….pointier. And, you can get Ford’s adaptive dampers as an optional extra.

Now, to the cosmetics, where we can see thr remodelled bonnet and grille with new vents and improved aerodynamics, new rear bumper and an optional performance rear wing. The V8 GT gets quad pipes, just adding on to it’s sheer presence, and we can’t wait to hear what it will sound like, especially with the optional active exhaust.

You get new colors, new alloys to pick from and on the inside, a new centre console and more aluminium in there too. It gets a 12-inch fully-customizable digital LCD screen in the dash, and plenty of assist functions to stop you from crashing into stuff like lane-assist and driver-alert system. 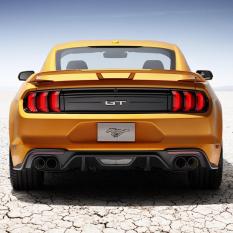 One thought on “More Power, New Looks for the 2018 Mustang GT”