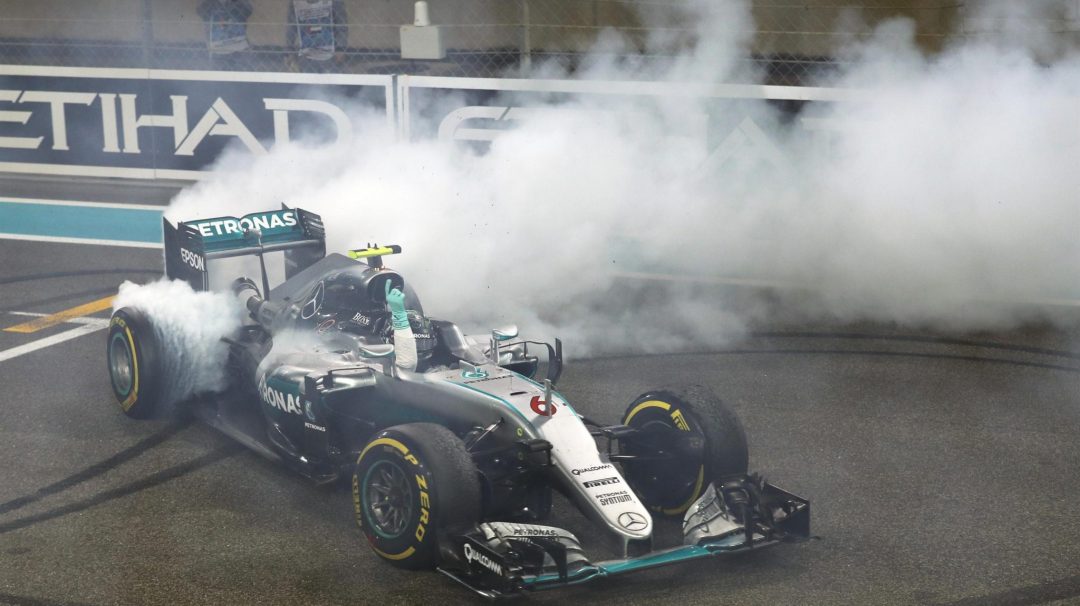 We Have A New Champion! Spectacular finale for the 2016 F1 season in Abu Dhabi

21 races. 1202 laps raced. 16 podium finishes. 8 pole position starts. 9 Grand Prix wins. Competing with team-mate and reigning World Champion who is already an F1 legend himself.  That’s what Nico Rosberg’s 2016 Formula One season was like, and that’s the one where he came out on top of everyone else, to become the new World Champion.

There was a lot of anticipation and nerve-wracking excitement on race day at the Yas Marina circuit in Abu Dhabi, the venue for the final race of this year’s F1 season. This was the race to decide the championship between two long-time rivals and team-mates. A little lower in the ranks, there was the anticipation of the race between the old guard and the young blood. And for some, it was going to be their last racing appearance in the Formula One. It was a whirlwind of varied emotions for the people on the tracks, and the audience and the fans around the world. With all this on its back, the final race at Abu Dhabi gave us almost all of what we wanted.

We had a familiar top six on the starting grid, with Lewis on pole, followed in sequence by Rosberg, Ricciardo, Raikkonen, Vettel and Verstappen. Behind them, there were the two Force India cars in seventh (Hulkenberg) and eighth (Perez), with Alonso in ninth and Massa in tenth. Both the Mercedes had a great start with Hamilton pulling away, the Red Bulls struggled with theirs though and Raikkonen moved up into third with Ricciardo barely managing to keep Vettel at bay as they headed into the first turn. It seemed like disaster for Verstappen as he spun out after bouncing off the Force India car of Hulkenberg in the first turn and dropped down to last place.

But as the cars came into the pits to switch from the set of Ultra Soft compounds, Verstappen stayed out on track and recovered spectacularly moving up the pack and managed to get into second place, between Hamilton and Rosberg, thanks to the fact that the Red Bull car started on Super Soft tyres instead allowing them a longer first stint. Rosberg was having a frustrating time behind Max who appeared to be going a bit slower to allow Ricciardo to catch up with them while Hamilton was building a commanding lead up ahead. Meanwhile, Ricciardo still had to find a way past Raikkonen and defend against Vettel who was coming up from behind, a tough spot that.

Jenson Button’s last race in Formula One came to a rather dull end after he hit a kerb on lap 12 and damaged his front suspension, having to retire from the race. Still, he made no qualms about it, saying the only change would be that he can start his celebrations a little early as the former World Champion made his way out of the pits.

Lap 19 now and much to Rosberg’s annoyance, Verstappen still had not been into the pits and was ahead of him. A third-place finish would be enough for Rosberg to win the title, but the German was in no mood to take it easy and allow Ricciardo and the Ferrari’s to catch up with him, putting him at risk of messing up his Championship chances. In lap 20, Rosberg made his move, with Verstappen holding him off for a set of turns but losing out to Nico when they came out of the turns and the faster Mercedes charged ahead with the added help of the DRS.

Just a couple of laps later, Max came into the pits for a set of soft tyres, a clear indication that he was running on a single-stop strategy. At the 24 lap mark, the top ten were Hamilton, Rosberg, Raikkonen, Ricciardo, Vettel, Hulkenberg, Perez, Verstappen, Massa and Alonso, in that order. Ricciardo and Raikkonen pitted relatively early for their last pit stops, and the Mercedes’ came in for theirs at lap 29 and lap 30. These stops put Vettel in the lead, 7-seconds clear of Hamilton, the clean air allowing the German to get the most of his tyres before he comes in for his last stop of the race.

At lap 40, Vettel enters the pits and with just 15 laps to go, he goes for the faster set of Super Soft tyres that would allow him to chase down the Red Bulls, and maybe even the Mercedes. His stop puts Hamilton back in the lead and completely in control of the race. With 10 laps to go and having cleared most of the back markers, Lewis starts to slow down the pace of the race, pushing Rosberg back and allowing the Red Bulls and Ferraris to catch up and put some pressure on the man who is leading the World Championship standings. Meanwhile, Vettel has been setting the fastest laps, fast enough even to worry the folks at Mercedes of a possible battle for position near the end of the race. 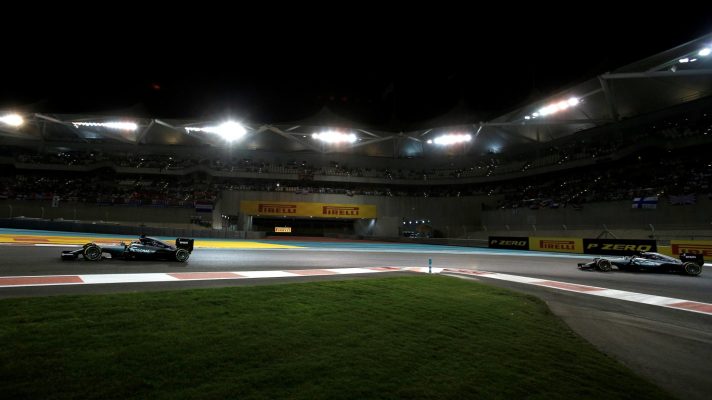 A flash of brilliant and aggressive racing from Vettel as he overtakes Ricciardo to take fourth place, now chasing right after the leaders. Hamilton is getting instructions over the team radio but continues to go at a slower pace, allowing Verstappen to put serious pressure on Rosberg, who can afford to lose two places to still win the championship but that is a risky situation he doesn’t want to consider. With just 5 laps to go, the total gap between the first four cars is just a couple of seconds with Vettel now catching up with Verstappen, waiting to make his move.

Lap 52 of 55, Hamilton still leads, just outside of DRS zone from Rosberg who has Verstappen and Vettel right on his tail. Vettel dives in to pass Max, finding space where there seemed to be none and makes it stick, the nose of the Ferrari now right under the rear wing of Rosberg’s Mercedes. Even if Vettel were to pass, a podium win would be enough for Rosberg to win the title, but there was still the threat of Verstappen behind them. Last couple of laps now, Lewis in complete control, Vettel trying to look for a way past the Mercedes but Rosberg is doing a brilliant job of defensive driving without losing too much pace, and Verstappen had now fallen a little further back but was still a threat.

Those last few laps were probably the most uncomfortable laps of Nico Rosberg’s F1 career till date, as the front three came across the finish line in a time bracket of less than a second, but he had done it. Hamilton had given it everything he could, he had won the race, but it wasn’t enough to get him his fourth championship title. Nico Rosberg too had done everything he needed to do, just as he had all season, and that is why he is now the 2016 Formula One World Champion.

Vettel finished third after that brilliant display of strategy and pace from the Ferrari on the last ten laps, Verstappen had to settle for fourth, finishing fifth in the championship standings, behind Sebastian. Daniel Ricciardo finished fifth, followed by Raikkonen in sixth. Another points finish for both Force India drivers, Hulkenberg (7th) and Perez (8th) securing a fourth place finish in the manufacturer’s title, Force India’s best yet, ahead of the Williams team. Massa, who too was retiring from Formula One, was happy to end the season with a points finish in 9th place and Fernando Alonso took the last of the points in 10th.

It was an emotional night for Nico Rosberg, to finally win the World Championship title, after all these years, and after an especially hard fought season. Lewis Hamilton too sidelined his point of how Nico had fewer reliability issues and such, acknowledging that the man had done exactly what he needed to do, to win the title, and respectably so. He did say his last word of caution to the newly crowned champion, that he was coming to take back the title next season and to watch out for him.

That’s all for this season, and we wish Rosberg happy celebrations on his victory. We’ll be back with more F1 next year, and there’s a lot to look forward to with the new wider tyres, revised aerodynamics and louder engines, and we’re already getting impatient about it.