It was a soaking wet weekend at the Formula 1 Premio Do Brasil 2016, and there was a lot more drama than expected. The championship in the balance, the last F1 race at home for soon-to-be-retiring Felipe Massa, the rivalry between Red Bull and Ferrari, especially between Vettel and Verstappen, it all came into this sensational race, in the home country of one of F1’s greatest, Ayrton Senna. 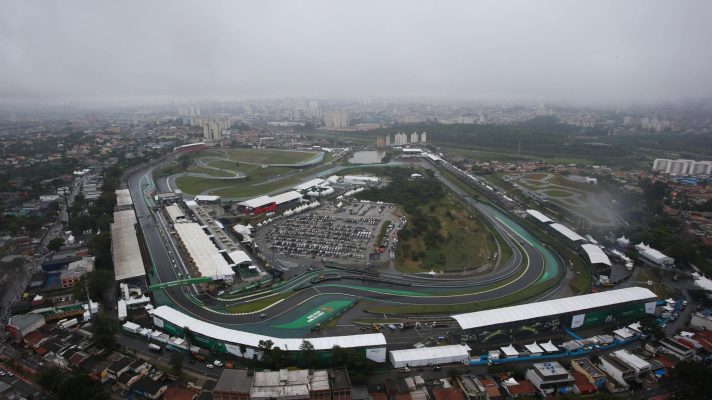 The qualifying had Hamilton on pole again, bringing his total to 60 pole position starts, just behind Senna and Schumacher, with Rosberg in second, Raikkonen in third, Verstappen in fourth, Vettel in fifth and Ricciardo in sixth. The rest of the top ten constituted of Grosjean, Hulkenberg, Perez and Alonso in seventh, eighth, ninth and tenth respectively, a very good qualifying result for the Haas racing team.

It was still super wet when the cars started on the installation lap, with puddles of water in plenty of corners, and extremely poor visibility due to the spray coming up from the car ahead. All these factors in place, we had our first retirement even before the race had started, as Grosjean aquaplaned and crashed out on the installation lap. As a result, the start of the race was delayed by 10 minutes and happened under the lead of the safety car, with all cars on wet tyres, and no restrictions on having to use a set of slicks today.

In the laps behind the safety car, all the drivers were giving feedback to their teams about the track conditions, mostly about the pools of collected water and the lack of visibility from the spray that would make it very challenging to drive a good racing line. This race will push all the drivers to their limits. Finally, at the end of lap 6, the safety car came into the pits and the race was now truly underway.

Hamilton wasted no time in putting the hammer down to pull away from the pack, and neither did Verstappen who took the inside of Raikkonen on the first turn, moving up to third and now chasing Rosberg. Further down the order, many drivers were coming into the pits to switch to a set of intermediates, a move not being followed by the race leaders, and we soon saw why. Vettel had a spin on lap 11 that had him facing the wrong way, but luckily he avoided any collisions and recovered the car. He then had a poor pit stop that put him down in P19. 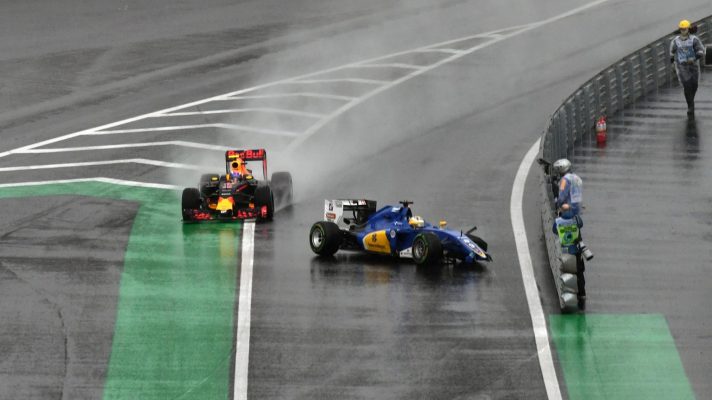 Lap 13 saw the end of Ericsson’s race as he spun and crash in exactly the same spot as Grosjean did, the collision with the barrier broke his front axle and placed his car in the way of the pit lane. He was on the intermediates, which seemed to be a suicidal choice in those track conditions. Verstappen was right behind him and drove around to enter the pits, as did Ricciardo shortly after, which earned him a 5-second penalty, for entering the pits when pit lane is closed. The safety car was out again, the race slowed down once again, with Hamilton still in the lead.

The safety car stayed out till the end of lap 19, but within seconds of the restart, Kimi Raikkonen had a bad spin on the start-finish straight, bouncing his car along the barriers like a pinball. He was lucky to narrowly escape collisions with the cars coming down the stretch at almost 200kph who almost did not see him because of all the spray. The red flag was called right away. 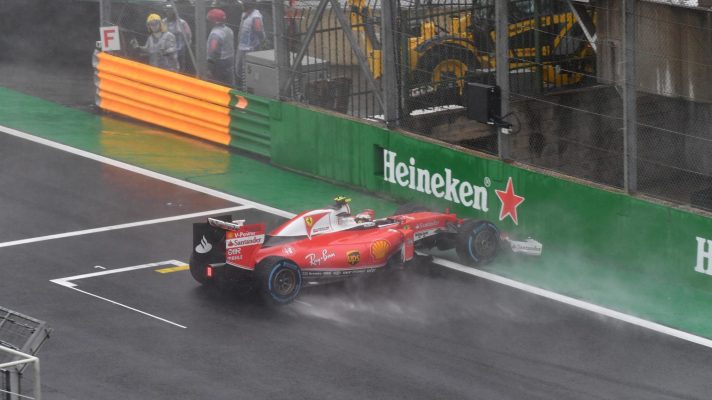 It was almost 30 mins before the cars were back on the track again, emerging from the pit lane, behind the safety car. The rain continues relentlessly, with drivers complaining that it is even worse than before. Tyre changes while under the safety car shuffle up the positions a little, Palmer having retired as his car sustained heavy damage from a collision with Kvyat and did not join the restart. Seven laps later, behind the safety car, the track conditions still not satisfactory, we get our second red flag of the race after just 28 laps.

Another 20 mins later, the cars came out of pit lane, for the second restart, still behind the safety car, with many drivers raring to go and start racing. The race was underway soon enough as the safety car came into the pits at the end of lap 31 and Verstappen was right on the heels of Rosberg.

We didn’t have to wait long to see the youngster weave his magic as he overtook the German, taking the wide line out of turn 3 on lap 32, a bold move but it worked! Verstappen now has second place and is looking to try and catch Hamilton, while Rosberg is trying to find his pace again in these conditions.

The difference in the capabilities of the cars now has little say in the race, the bravest are being rewarded and the 19-year old Red Bull racer has a lot of guts! Onto lap 35, he sets the fastest lap of the race and Ricciardo is pushing hard too. Coming down the home straight on lap 38, Verstappen makes the save of the season! He was right on Hamilton’s tail when his tyres aquaplaned and sent him into a spin, but he somehow managed to counter steer and keep the car out of the barriers. He keeps track position with Rosberg now right behind him. Brilliant driving by the youngster! Surely this moment was one for the record books of F1.

More rain is expected but drivers on Intermediates seem to be keeping faster pace at that point. Further down the order, Vettel was making his way up the ranks. Lap 43 gave the viewers some classic F1 action as he battled Alonso for seventh and got in front of the Spaniard. Both the Red Bulls were called into the pits on lap 34 for a switch to intermediates, which was quite a gamble.

In Lap 46, Rosberg had his own “woah” moment as he nearly crashes the car coming into turn 12 but manages to correct himself. It could have been a championship deciding moment, and all he needs to do is play it cautious to secure his second place points while Hamilton was well in the lead with no spray to deal with.

Felipe Massa crashes out near the on lap 48 which brought the safety car back out, nullifying Hamilton’s lead once again. The veteran racer would have surely hoped for a better finish at his last F1 race on home soil, but Massa gets an amazing reception from the crowds and the race marshals and all teams.

In the following laps under the safety car, drivers voice their concerns over the track conditions, including Verstappen, and Rosberg who was heard over the team radio saying, “How many crashes do they want to see? It’s impossible out here,”. Max came into the pits on lap 55 to switch back to wets, seeing that we will have the full 71 laps, Ricciardo having done the same a lap before. The race was underway once again on lap 55, with Verstappen on track in 12th place, for what was about to be a drive that would become a part of F1’s most memorable moments.

He made his way past Bottas into 11th on lap 57 and by lap 60, he had overtaken Ricciardo and Ocon to move up to 8th. Up ahead, Nasr and Hulkenberg were battling for sixth, Nasr having his best run of the season. Perez meanwhile is in third with Vettel fighting for fourth with Carlos Sainz. Verstappen is charging through the field, now up in 7th, cruising past Nasr. By Lap 66 he had caught up with the two Germans, making quick work of Hulkenberg, and again, a brilliant move on Vettel on lap 67, and down the inside of Sainz on lap 68, into P4!! Three laps to go, three seconds behind Perez, Verstappen is finding grip where no one else has in the entire race. Lap 70, Verstappen gets past Perez, who put up a decent fight but had to concede, and there we have it! Verstappen has driven the race of the season, and probably his career best so far, to come and finish third at this dramatic 2016 Brazillian F1 Gran Prix, what an astounding performance!!

Another Mercedes one-two, Hamilton’s first win in Brazil, a great moment for him as well, and a brilliant performance by the reigning world champion, as he takes the championship fight down to the last race, cutting Rosberg’s lead down to just 12 points. But all eyes were on the most spectacular driver of the race, Max Verstappen! What a driver, what a race, and we can barely wait to see him in the 2017 season to race for the championship provided his team can support him with the right kind of car.

The final race of the 2016 F1 season will be in Abu Dhabi, two weeks from now, where the championship will be decided, to conclude a fantastic year of racing. Stay tuned to the Auto Loons!

Final results of the Formula 1 Premio Do Brasil 2016: